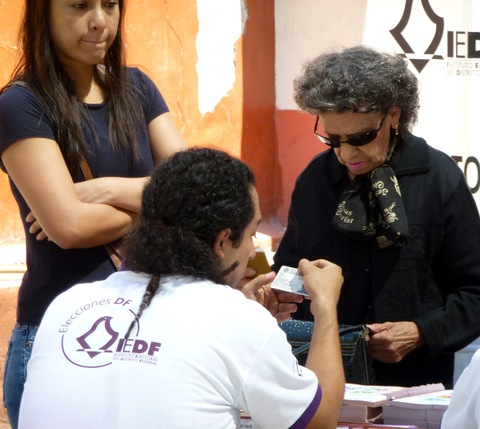 Mexican voters go to the polls today and are electing a new president. Most are hoping for a leader who will find a way to provide better security to Mexicans from violence stemming from the drug cartels. Polls show Institutional Revolutionary Party’s candidate Enrique Pena Nieto leading two other left leaning presidential contenders.

Interestingly, the process voters in Mexico must go through to confirm their ID’s at the polls appears to be taken more seriously by the Mexican government than the federal government in the United States. According to PBS:

“Backers of Lopez Obrador told Warner at the polling station Sunday that they had “strong doubts” this election would be devoid of the fraud alleged in the last election in 2006, when their candidate narrowly lost to Calderon.

To try to prevent fraud, Mexico’s election commission has put certain identification checks in place, including issuing each voter a national ID card, which must be matched against a registry that includes the voter’s photo.”

But even before there’s any evidence of fraud, some are predicting major demonstrations if Lopez Obrador is not declared the winner, Warner said.

The Obama Justice Department is in a number of legal fights with states, including Texas and Florida, that have established voter ID laws or are taking action with cleaning their voter rolls. Democrats and other liberal allies call the voter ID laws “voter suppression” that have “racist” intent, particularly toward hispanics.