Grants have created 3,189 new jobs, but questions linger about effectiveness

Congress is broken. It can be fixed

Cancer patients lose the most under Democrats’ socialist tax bill

Roe haunts from its grave: Dobbs opinion failed to overrule its core rationale

A year after Gov. Bob McDonnell won passage of the largest economic-development initiative in Virginia history, the state has given 24 mid-to-large companies $9.74 million in grants to create 3,189 jobs.

But officials have questioned whether some of the recipient companies would have opened or expanded in Virginia without taxpayer-funded handouts.

Mr. McDonnell on Thursday announced the latest grants: $200,000 for the CFA Group, a professional association for investors, to employ 45 workers at a new facility in Charlottesville, and $1 million for a nonprofit commuting center to create 15 jobs in Danville.

A list of the incentive grants obtained by the Washington Times shows that since July 1, the beginning of the state’s fiscal year, nearly one-fifth of the grant money went to Microsoft Corp., which was given $2.1 million to build a data center in Mecklenburg and employ 50 people. Most of the other grants were aimed at promoting manufacturing from auto-transmission parts to surgical products to wood pellets used as a clean-fuel source.

A handful of companies in the prosperous Northern Virginia area received grants. Manassas-based Micron Technology took $1.5 million to expand production of memory chips, Winchester-based O’Sullivan Films took $800,000, and GeoEye, a satellite-imagery company in Herndon, was given $84,000.

But most grants were awarded to companies in less-populated areas of the state suffering from higher unemployment rates - places such as Martinsville, Sussex and Pulaski. 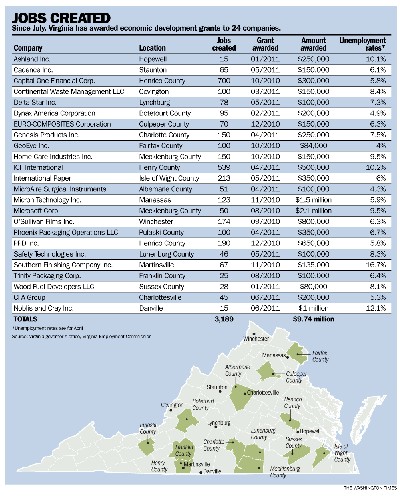 Each job comes at a price. Divide $9.74 million by 3,189 jobs, and the state paid $3,054 per job created. And that doesn’t include other incentives not tracked by the Virginia Economic Development Partnership, said Rob McClintock, research director for the state agency.

“We think it’s important to have these incentives, only to the extent that it makes sense,” Mr. McClintock said. “We will never probably have the incentive war chest other states have. We believe it’s a balance and to keep that balance in perspective.”

Mr. McDonnell is trying to make job creation one of the hallmarks of his term. Aside from balancing a $4 billion budget shortfall during his first year in office, his most touted accomplishment was convincing the General Assembly to approve a $57 million package of economic incentives.

This year, legislators approved $36 million of an additional $55 million Mr. McDonnell requested to try to lure more business to Virginia. The package will fund more than a dozen different types of development programs, grants and tax credits, including a new credit for research and development.

Unlike other types of incentives, such as tax credits and forgivable loans, the grants are essentially free money for businesses that promise to meet job-creation and investment benchmarks.

While Mr. McDonnell speaks frequently of the merits of offering economic incentives, his efforts have not gone without criticism.

At the prompting of Sen. Janet Howell, the General Assembly during the last legislative session voted to mandate a study on their effectiveness by the Joint Legislative Audit and Review Commission.

Mrs. Howell, Fairfax Democrat, told The Times one of her concerns was that the state seemed to be “paying for some jobs tens of thousands of dollars in incentives.”

“What I’m striving to accomplish is to make sure we’re spending money wisely,” she said. “I have no problem at all with investing in jobs and job creation - I strongly support it - but I want to make certain what we do is productive and doesn’t have unanticipated negative consequences.”

She said she also wants to find out which of the state’s multiple incentive programs are effective and which ones aren’t.

“I just have not been for this,” he said. “If you’re a free-market person, it’s like being a little bit pregnant with government money. I don’t see the use of it. It directly gives money to corporations.”

He added that the “small, little pizza store would probably not be on the governor’s economic development,” but a big corporation would.

“What is the rationale for subsidizing them? How do you pick one company over another? I don’t know how you can do it at least without the appearance of some kind of favoritism,” he said.

Enticing businesses with incentive packages is becoming increasingly common, with states competing against each other for Fortune 500 companies to locate within their borders. When contracting giant Northrop Grumman was selecting a state for its headquarters last year, Virginia, Maryland and the District launched an all-out bidding war. Virginia won the battle, in part by offering the company a $13 million package.

Because Virginia’s business climate is consistently ranked in the top two or three in the country, the state doesn’t have quite as much pressure to offer incentives as other states, Mr. McClintock said.

“Our geography, our world-class research universities, our K-through-12 system, our transportation system, our regulatory system - all of those come into play,” he said.

• Paige Winfield Cunningham can be reached at pcunningham@washingtontimes.com.