53 youths in killings were D.C. wards on 'at risk' list

Democrats led by a whole Squad of ghoulish opportunists

Students willing to change their liberal views when presented with facts

More than 50 D.C. youths in the custody of the city’s juvenile justice agency either have been killed or found guilty of killing someone else over the past five years — and the majority of them had been categorized in advance as posing a “high,” “high-medium” or “medium” risk of reoffending.

Hundreds of other youths with similar risk factors remain on city streets, according to figures obtained by The Washington Times from the Department of Youth Rehabilitation Services (DYRS), in part because of a lack of secure facilities to hold them and because officials think confining them jeopardizes their chances for rehabilitation.

Even as officials declare public safety to be their top priority, statistics provided by the agency in response to a Freedom of Information Act request show that 19 “wards” — juveniles who commit crimes and are placed in the agency’s custody — have been convicted in homicide cases since 2007. An additional 34 DYRS wards were victims of homicides over the same period.

TOP STORIES
Capitol rioter's parents renounce Trump's 'Stop the Steal': 'We see now that it was all lies'
Inactivity associated with much higher chances of severe COVID-19 illness: Study
Students willing to change their liberal views when presented with facts

“This is an astonishing number of lives lost while under the care and custody of this, or any District agency,” said D.C. Council member Jim Graham, Ward 1 Democrat and chairman of the committee with DYRS oversight. 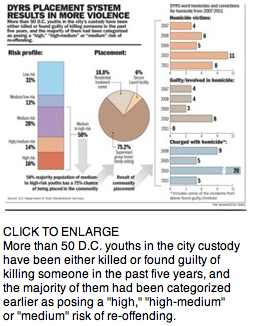 City officials said separate statistics show that 39 youths have faced homicide charges with dispositions that are pending or include convictions, acquittals, dismissals or guilty pleas since 2009, when DYRS adopted its structured decision-making process to guide policies on where to place troubled juveniles. Twenty-three of them — prior to the homicides with which they were charged — were determined to pose a high, a high-medium or a medium risk.

Of the 24 wards who were victims of homicide since 2009, 18 of them posed a heightened risk by the DYRS measure.

By city officials’ own assessment, hundreds more youths with similar risk levels are on the streets on a daily basis.

According to figures provided last month by DYRS officials to the D.C. Council studying a random day in 2011, 58 percent of the roughly 1,000 city wards were classified as high, high-medium or medium risk. Fewer than 200 of those youths were sent out of the city to residential treatment centers across the country. About 60 more were in New Beginnings, the city’s secure detention facility for youths in Laurel, Md.

That leaves more than 300 youths classified between high and medium risk placed with relatives under supervision of community-based organizations or in one of the District’s dozens of group homes scattered across the city.

“These statistics raise serious questions of DYRS’ current risk-assessment model and decision-making process to place young people back into neighborhoods without rigorous rehabilitation services and monitoring,” Mr. Graham said. “A young person assessed at high to medium risk should be placed in a high-to-medium secure setting for their rehabilitation.”

In a recent interview with The Times, Deputy Mayor Beatriz “B.B.” Otero, who oversees DYRS, questioned the effectiveness of placing youths in secure facilities and expressed a philosophical preference for working with youths outside of detention-based settings.

“I don’t believe all of the [medium-risk] or even the high-risk children need to be confined,” Ms. Otero said. “I believe each individual has the potential for rehabilitation.”

Mr. Gray’s office also insists that it remains focused on public safety, and says the percentage of homicides among committed youths is small.

“As Deputy Mayor Otero [has] noted, public safety and the safety of the children in its care are DYRS’ top priority,” spokesman Pedro Ribeiro said in an email. “From 2008 to 2011, there were a total of 1,928 unique youth committed to DYRS.

“This means that less than 1 percent of the youth committed to DYRS from 2008 to 2011 were found guilty of [or involved in] a homicide, and [less than 2 percent] were victims of homicide,” Mr. Ribeiro said.

Mr. Graham challenged the Gray administration’s stated priorities. He pointed to the three people charged with the killing of Robert Foster on the day of the Caribbean Festival in June who were either under DYRS supervision or had just completed their supervision, and another case in Ward 1, in which a DYRS ward who had just been returned to the community by the agency’s Community Review Panel is said to have fatally shot another DYRS ward.

Just as disturbing, Mr. Graham found, is that more than 100 youths destined for residential treatment facilities because of risk factors, drug abuse or specialized therapy for crimes such as sex offenses were first placed in community settings.

“I am concerned that those 102 young people that were originally placed in the community prior to secure placement may have picked up new charges and in some cases adult charges,” he said. “They are now in more trouble than they were when they were first placed with [DYRS].”

One or two bad cases?

Predicting outcomes for youths can be misleading, some analysts say. The Justice Department’s Office of Juvenile Justice and Delinquency Prevention reports that juvenile arrests for violent offenses declined 10 percent between 2008 and 2009. Between 1994 — when violent-crime arrest rates for juveniles hit a historic high — and 2009, the rate fell nearly 50 percent to its lowest level since at least 1980.

Yet the percentage of overall crime attributed to youths in general has remained problematic.

Advocates in the juvenile justice arena insist that attempts to calculate suspects or victims of youth homicides while in the custody of an agency for juveniles are misguided.

“It’s like saying that people who are in the hospital are more likely to be sick than people who aren’t,” said Joseph B. Tulman, a law professor at the University of the District of Columbia, who is a member of the advisory board to DYRS and director of the Took Crowell Institute for At-Risk Youth.

Like Ms. Otero, Mr. Tulman and his fellow advocates prefer to talk about evidence-based treatment outcomes — not the dozens of lives lost or ruined while under the care and custody of DYRS.

“We all know that one or two bad cases has the potential to tear down the greater successes of this agency,” Ms. Otero told a room full of advocates in December, before a panel discussion about transforming the District’s juvenile justice system from a punitive to a more rehabilitative model.

Public perception is not all that is at stake.

Last year, the family of Neil Godleski, a Catholic University student who was killed in 2010 by a DYRS ward who had walked away from a group home, sued the District for $20 million in damages. Though the District has been dropped from that lawsuit, the group home operator, Associates for Renewal in Education Inc., remains a defendant.