Fresh off his near-win in Iowa, Rick Santorum has lept to 11 percent support among likely New Hampshire GOP primary voters — but Mitt Romney remains the front-runner with 38 percent, according to the inaugural Washington Times/JZ Analytics Poll, taken Wednesday.

“We’re seeing an Iowa bounce, clearly, already for Santorum,” said John Zogby, who conducted the one-day poll, taken to gauge the effects of Iowa’s caucuses on the first-in-the-nation primary in New Hampshire on Tuesday.

After Mr. Romney, Rep. Ron Paul placed second, collecting support from 24 percent of those in the survey, while Mr. Santorum’s 11 percent put him third. Last week, the former senator from Pennsylvania stood at 7 percent.

The poll also showed primary voters in New Hampshire viewing the nomination through a practical lens: Half of all likely voters said their main concern was picking a candidate who could defeat President Obama in November’s general election. That compares with 38 percent who said they were looking for someone who shared most of their views, regardless of ability to match up against Mr. Obama.

Iowa’s shock results — Mr. Santorum surged in the final two weeks to notch his stunning near-victory over Mr. Romney, while Mr. Paul placed a strong third — haven’t played out fully in New Hampshire, where voters have four more days before they vote.

The poll surveyed 498 voters who said they definitely would vote or were very likely to vote Tuesday. It had a margin of error of 4.5 percentage points. 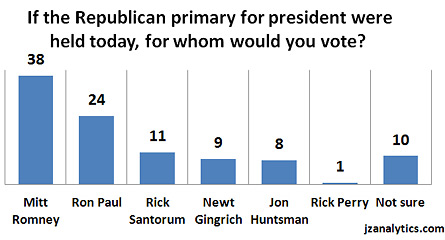 “After my incredible finish in Iowa, events are playing out exactly as I hoped. My campaign is quickly emerging as the true constitutional conservative alternative to Mitt Romney,” he said in the email, in which he pleaded for funds “to fend off the smears coming from other campaigns.”

The campaign overall has become markedly more divisive in the past few weeks, and nowhere has that hurt more than with former House Speaker Newt Gingrich, who placed fourth in Iowa and whose standing in New Hampshire slid dramatically as well.

Mr. Zogby said Mr. Santorum and Mr. Paul have room to build their support, but Mr. Romney remains strong, holding a lead across most demographics. His support also appears to be deep. Almost all of his backers said they are unlikely to change their minds between now and primary day.

“It looks preliminarily like Romney’s showing in Iowa may be enough to consolidate his support in New Hampshire,” Mr. Zogby said.

One exception to Mr. Romney’s broad support is among single people; Mr. Paul was backed by about half of all single voters. Mr. Paul also led among self-identified liberals, while Mr. Romney collected about 40 percent of moderates and 40 percent of conservatives.

All eyes will be on Mr. Santorum going forward.

The 11 percent Mr. Santorum polled on Wednesday is equivalent to the percentage of primary voters Mike Huckabee won in New Hampshire in 2008, fresh off his own caucus win in Iowa. Mr. Santorum will want to beat that level of support to prove he has staying power.

Mr. Romney won 32 percent of the vote in New Hampshire in 2008 but lost to Sen. John McCain, who took 37 percent and went on to win his party’s nomination.

The Times/JZ Analytics Poll also found tea party voters feeling much more pragmatic than expected. Among those who said they were sympathetic to the tea party, 58 percent also said they were ready to back a candidate who doesn’t share all their views but could defeat Mr. Obama in November.

By contrast, voters not sympathetic to the tea party were more likely to be ideologically driven. About 40 percent said that unseating the president was more important than picking someone who shared all their views.

That focus on electability makes New Hampshire different from Iowa, where the networks’ entrance polls showed that about 30 percent of all voters said a change in the White House was their top factor in choosing a nominee. Mr. Romney won nearly half of those voters in Iowa.

• Stephen Dinan can be reached at sdinan@washingtontimes.com.