NEW EPISODE: What is gaslighting? The Unregulated Podcast with Mike McKenna and Tom Pyle

Dr. Kermit Gosnell’s abortion trial in Philadelphia is ongoing, but it’s receiving little attention in the media. There is one place where millions of concerned citizens are talking about it: Twitter.

Conservatives and other pro-life advocates who are upset with the lack of coverage of the case are taking to social media sites in droves, causing ‘Gosnell’ to trend on Twitter.

As The Washington Times’ Valerie Richardson reported on Monday: “Not every murder trial receives prominent national coverage, but the Gosnell case would seem to contain all the ingredients of must-see television: a formerly respected community leader accused of unspeakable acts; the death of a young immigrant woman; a parade of former employees offering graphic testimony on the gruesome deaths of more than 100 just-born infants; and even the implication by the doctor’s lawyers that the charges have been motivated by racism. Dr. Gosnell is black and his clinic was in a mostly minority neighborhood.”

Filling the media void, the traffic on Twitter and other social media sites has proven that traditional forms of news gathering can be circumvented.

Some notable tweets from known conservatives include: 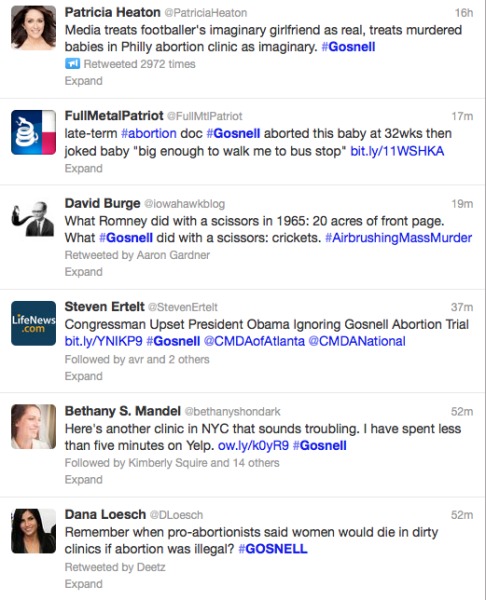 • Douglas Ernst can be reached at dernst@washingtontimes.com.