ON WEDNESDAY: Join "A conversation with Kellyanne Conway," hosted by Charlie Hurt and Kelly Sadler

PCP more prevalent among arrestees in D.C. than other big cities

PCP usage is far higher among people arrested in the District than those arrested in five other major cities, according to a new federal report on drug use.

The latest Arrestee Drug Abuse Monitoring Program report, prepared by the Office of National Drug Control Policy, states that nearly 12 percent of men arrested in the District last year had PCP in their systems at the time of arrest. In the other cities evaluated in the report, less than 1 percent of males arrested tested positive for PCP, the hallucinogenic drug phencyclidine.

Introducing the report at a seminar at the Urban Institute in the District last week, R. Gil Kerlikowske, director of the White House Office of National Drug Control Policy, cited the overall statistics as a need for better substance-abuse treatment programs in local and federal detention centers.

“In local jails, the ability to get any treatment is pretty difficult,” Mr. Kerlikowske said. “Expanding access to treatment, especially among inmates, can dramatically reduce the repeat offenses.”

In five other cities — Atlanta, Chicago, Denver, New York City, and Sacramento, Calif. — the report concluded that more than 50 percent of those arrested during the survey periods tested positive for at least one drug, most commonly marijuana. 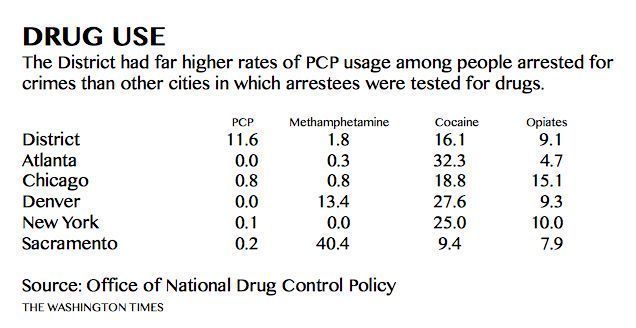 The data from the District did not include all the same information provided for the other cities because it was collected differently, but it still offers insight into drug use among people arrested in the city. D.C. data was based on urine tests for 2,533 arrestees that were conducted by the D.C. Pretrial Services Agency over a 21-day period rather than the combination of interviews and drug tests conducted by federal researchers in other cities.

Unlike other cities, the D.C. Pretrial Services Agency did not survey marijuana usage, making it impossible to compare overall drug usage between the District and the other cities because marijuana accounted for such a high percent of usage elsewhere.

Cocaine use ranged from 32.3 percent in Atlanta and 27.6 percent in Denver to 9.4 percent in Sacramento, according to the report. Across the board, cocaine usage decreased from a decade ago when New York City led the survey with nearly 50 percent of arrestees testing positive.