In troubled times, Biden’s speech should embrace peace through strength

A federal judge on Thursday upheld a D.C. law requiring that guns be registered every three years, that applicants submit photographs and fingerprints, and that pistol purchases be limited to one per month — a ruling that sparked outrage from activists who view it as further encroachment on Second Amendment rights.

U.S. District Court Judge James E. Boasberg dismissed with prejudice a sweeping challenge to the District’s handgun laws, meaning the claims cannot be raised again. The 62-page ruling opened with the words “The District of Columbia knows gun violence” before recounting some of the most notorious recent D.C. shootings.

“The District of Columbia knows gun violence. Notorious for a time as the ‘murder capital’ of the United States, it recorded over 400 homicides annually in the early 1990s — more than one for every 1500 residents. While safety in the District has improved markedly in this millennium, residents will not soon forget the violence of the more recent past: the wounding of seven children outside the National Zoo on Easter Monday in 2000, the triple murder at Colonel Brooks’ Tavern in 2003, the five killed in the South Capitol Street shootings in 2010, and the twelve shot to death inside the Washington Navy Yard only a few months ago. These number just a few of the lives lost to guns in our city’s recent memory.”

“The people of this city, acting through their elected representatives, have sought to combat gun violence and promote public safety,” Judge Boasberg wrote. “The Court finds that they have done so in a constitutionally permissible manner.”

Gun rights activists decried the decision as the latest assault on the right to keep and bear arms.

“The Second Amendment is a right, not a privilege. It was established to protect Americans from government tyranny, whereas the government shouldn’t keep a registry of which households are armed,” said Danielle Thompson, a spokeswoman for the National Association for Gun Rights. 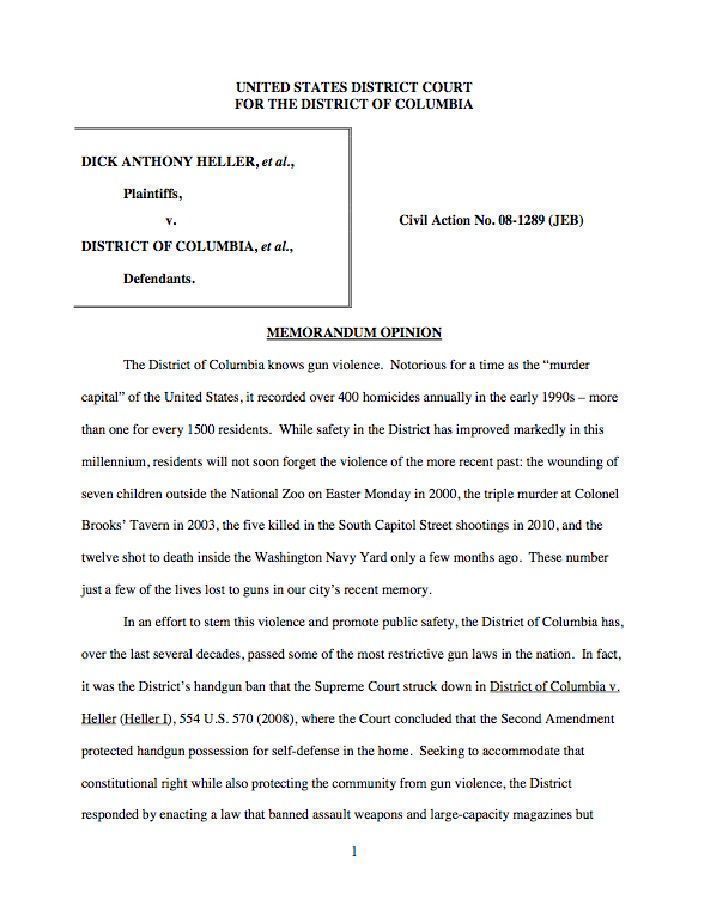 The ruling in the case, known as Heller II, follows a lawsuit filed by Dick Anthony Heller that led the Supreme Court in 2008 to overturn the District’s 32-year ban on virtually all handgun ownership.

While acknowledging the fundamental right to bear arms, the Supreme Court in the District of Columbia v. Heller decision and subsequent rulings has left unclear the limitations of efforts to regulate gun ownership.

The Heller II plaintiffs sought to challenge regulations the city enacted once the handgun ban was overturned and objected to a list of weapons prohibited by city officials.

In October 2011, the U.S. Court of Appeals for the D.C. Circuit upheld the limitations on military-style semi-automatic rifles and magazines that hold more than 10 rounds of ammunition. But it remanded some of the registration requirements for further review.

In 2012, the D.C. Council passed a bill that eliminated several of the registration requirements, such as requiring gun owners to undergo background checks every six years. Mr. Heller and the plaintiffs filed a third amended complaint in July 2012.

“The D.C. Council obviously attempted to lighten the burden of the safety course, reducing it from five hours to only one, and requirements such as these are not unfamiliar,” he wrote, comparing the practice to the requirement of a test issued before a driver’s license is issued.

He affirmed the overall registration process for pistols and long guns, writing that the requirements “are substantially related to the District’s interests in police protection and public safety and narrowly tailored to achieving those interests.”

Of the law that limits D.C. residents’ purchases of pistols to one per month, Judge Boasberg wrote, “even under the current limitation, District residents can still accumulate up to 12 new pistols each year. That is more than enough.”

The ruling also affirmed the requirement by the Metropolitan Police Department that gun owners renew their gun registrations.

Renewal is required for an estimated 30,000 guns registered in the city before 2011. The renewal process began in January.

“This is the latest confirmation from courts throughout the country that the strong, common-sense gun laws are fully compatible with the Second Amendment,” said Jonathan Lowy, of the Brady Center to Prevent Gun Violence. “Gun laws in Washington, D.C., are some of the most comprehensive in the nation; they can and do save lives.”

The issue of gun control has taken on renewed urgency after several states last year moved to strengthen restrictions in the wake of a December 2012 mass shooting at Sandy Hook Elementary School in Newtown, Conn.

The ruling Thursday might not set widespread legal precedent, but it could embolden lawmakers pursuing ever-stricter gun control legislation, said Kermit Roosevelt, a law professor at the University of Pennsylvania.

“It’s going to be case to case until the Supreme Court gives a little more guidance,” he said.

Gun rights activists say that in the meantime they will continue taking their objections to the courts.

“A number of anti-gun mayors in major cities will likely be pushing this,” said Alan Gottlieb, of the Bellevue, Wash.-based Second Amendment Foundation. “As they try to do this, there will be suits filed.”