Political views are dictating where people decide to live or work alongside considerations such as cost of living and job opportunities, sparking talk of a “Great Decoupling” in which Americans sort themselves by ideology and create deeper shades of red and blue pockets across America.

Residents are fleeing high-cost liberal states such as California for Idaho, Texas and other places. Politics isn’t the leading cause, but signs show it is a clincher for conservatives who are fed up with the state’s one-party rule.

In other cases, economic opportunity upends the political makeup of a state or calcifies an ideology within a region. Those flocking to manufacturing jobs in Texas work hard but might not have lofty degrees, bringing with them conservative worldviews and defying oddsmakers who say the state is trending blue.

Conversely, an influx of college-educated voters is hitting states such as North Carolina and Georgia and giving their political DNA a more liberal bent over time.

The conservative Convention of States Action nonprofit recently released a survey that found people were increasingly basing their locations on political considerations.

In the poll, which was conducted by the Trafalgar Group, more than 4% of independents and Republicans reported moving in the previous three years to regions that more closely aligned with their beliefs. About 1% of Democrats reported doing the same. 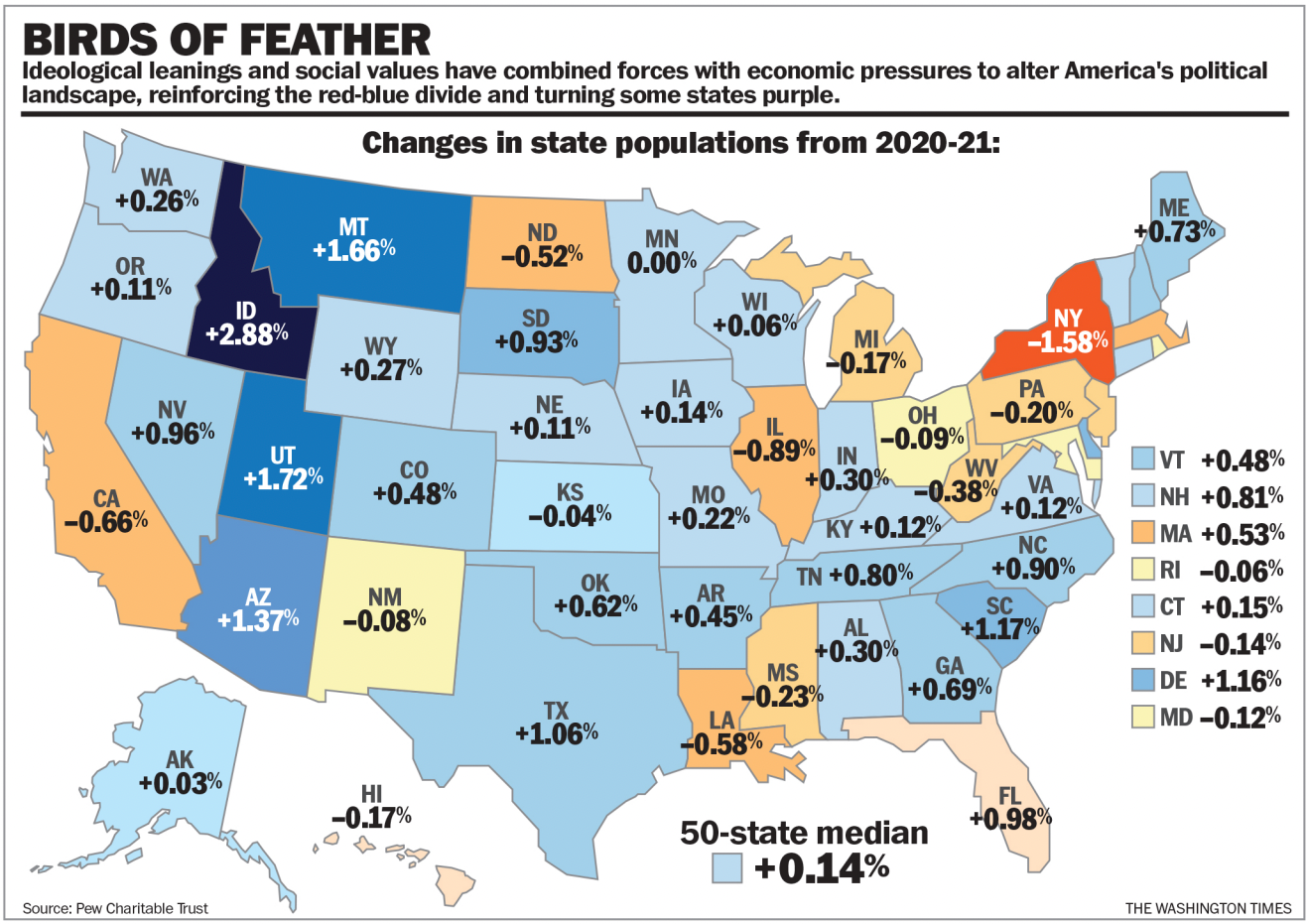 “It has been well documented that there has been a significant exodus of citizens from blue states since the start of COVID. But this incredible data reveals that it is Republicans and independents who have voted with their feet and moved to states more aligned with their values. One of the hidden insights of the 2022 election — the red states got redder, and the blue states got bluer,” said Mark Meckler, president of Convention of States Action.

He pointed to Florida, which gained nearly 330,000 residents during the height of the pandemic from April 2020 to April 2021 and morphed from a purple state into a Republican stronghold.

Around the same time, Republicans made big inroads in voter registration in Florida. They flipped a Democratic advantage in 2018 into a Republican edge of more than 350,000 registered voters as of Oct. 31, state data showed.

Gov. Ron DeSantis, a Republican who resisted stringent lockdown policies, romped to reelection in November. Republican candidates in the state outperformed party candidates elsewhere and made inroads in Democratic strongholds such as Miami-Dade County.

Other states are undergoing single-party takeovers. Thirty-seven states have “trifectas” — where the same party controls the governor’s office and both chambers of the statehouses. Republicans control 23 of these states and Democrats control 14, according to Ballotpedia.

California, which has single-party control, has been losing residents to other states for two decades.

About 7.5 million people have departed and only 5.8 million have moved into the state since 2010. Lower- and middle-income people said high housing costs were a big factor driving the migration, according to the Public Policy Institute of California.

“Even so, broader political differences about the role of government in society could still be a factor in some migration decisions,” the policy institute’s senior fellows Eric McGhee and Hans Johnson wrote in a recent blog post. “Conservatives feeling unrepresented in state government might be drawn to states that they see as a better ideological fit. For people already inclined to leave California for other reasons, politics might push them to finally pack their bags.”

Texas is one of their top destinations. Texas Gov. Greg Abbott, a Republican, easily won reelection this year despite a perception that the state is turning blue.

“Some of them are hardworking people who didn’t get a four-year degree. From a cultural perspective, that person is more likely to have a pickup truck and hunt and have a conservative worldview,” he said.

Gov. Brian Kemp is a Republican, but President Biden knocked Georgia into the blue column in 2020 two months before voters opted for two Democratic U.S. senators. One of them, Sen. Raphael Warnock, is locked in a tough runoff election battle with Republican Herschel Walker.

An Axios-Ipsos survey from August found that 30% of Americans considered moving during the prior six months. Although economic concerns were most prominent, social issues and values were factors, pollsters said.

“For the most part, people look to be going to a safe space for them, for their ideological identity,” Ipsos pollster and Senior Vice President Chris Jackson said at the time.

The Trafalgar results seemed to back up those findings. Mr. Meckler said America is in “the midst of the Great Decoupling,” while outside analysts see the trend accelerating.

“A quiet but important trend in American politics is the growing tendency of Americans to seek out and live near others who share their values, work at similar jobs, worship at the same churches — in short, for Americans increasingly to connect with those who live similar lives. That means blue-leaning individuals tend to seek other blue leaners, and for red-leaning people to search out other red leaners,” said Donald B. Kettl, a public policy professor at the University of Texas at Austin.

He said the trend isn’t always “super intentional.” Some people settle where they grew up or don’t move far, which can reinforce the trend, he said.

“But we’ve clearly seen a trend toward clusters of like-minded people, with the clusters at the community level. In fact, there can be blue-leaning clusters within red states — though rarely the reverse,” he said. “We spend a lot of time worrying about political polarization. A great deal of this polarization is the product of these subtle trends within communities.”

Some analysts aren’t convinced that Americans’ increasingly divisive politics will result in mass migration. Other factors, including the availability of remote work or family connections, could loom larger.

“I don’t think they’re the main driving force,” said G. Terry Madonna, a senior fellow for political affairs at Millersville University in Pennsylvania. “Some people just have family relatives, they move to be closer to relatives. They want what some have called ‘a better life’ in some of the surveys — that’s also important. I’m not ruling [politics] out completely.”

Some states are clamping down on abortion while others are considering ballot measures to preserve a broad right to the procedure after the Supreme Court overturned Roe v. Wade’s nationwide guarantee.

The Axios-Ipsos poll found “abortion issues” were driving concerns for 24% of Democrats and 16% of Republicans considering moves.

Some employers have expressed reservations about trying to get employees of childbearing age to relocate to places with new restrictions, but businesses don’t appear to be pulling up stakes and leaving conservative areas over the issue.

“There’s a lot of huffing and puffing by different corporations, but at the end of the day, it’s their fiduciary duty to shareholders to maximize profits. They’re not going to do that by moving their operations to California,” Mr. DeVore said.

He said some companies are offering to pay for female employees to go out of state for abortions.

“That’s what you’re seeing,” he said. “That’s how they’re navigating the question.”

• Seth McLaughlin contributed to this report.

• Tom Howell Jr. can be reached at thowell@washingtontimes.com.