A female employee of the Department of Youth Rehabilitation Services (DYRS) has accused her male supervisor of forcing her to perform oral sex in his office over a period of several months, prompting investigations by local police, D.C. officials and the U.S. Equal Employment Opportunity Commission (EEOC).

A Metropolitan Police Department incident report dated July 12, a copy of which was obtained by The Washington Times, states that the sexual abuse occurred from February through May. The alleged victim, a 28-year-old female corrections officer at the department’s Youth Services Center (YSC), told police “she performed the sexual acts because [the suspect] was her supervisor and she believed she would lose her job if she did not perform the acts,” the report states.

On Monday, D.C. Council member Jim Graham, who chairs the committee in charge of DYRS oversight, told The Times he asked DYRS Director Neil Stanley for more details after his staff first learned of the accusation Wednesday. The council member also said he urged the alleged victim and a person acting on her behalf to work with the police when they contacted him. 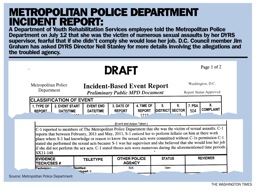 Two supervisory DYRS employees who work at YSC, and who are in the chain of command over the alleged victim, were escorted off the property last week, according to sources within the agency. They were placed on administrative leave pending the outcome of the investigation.

Christopher Shorter, chief of staff to Mr. Stanley, characterized theaccusation as “sexual harassment and behavioral misconduct” and said the agency, upon learning of the accusation July 12, immediately referred the matter to city police and an unidentified D.C. agency.

“We took appropriate personnel actions to ensure the health and safety of DYRS staff and youth,” he said, noting that no information has surfaced to suggest any youths were involved with the matter.

“We’ve reminded facility managers they should treat all reports of this nature seriously and report them to their immediate supervisors.”

Mr. Shorter also said Monday the matter has been referred to the EEOC. Sources familiar with the case said the EEOC has launched its own investigation.

Meanwhile, an email obtained by The Times shows that MPD Detective Lowell G. Grier has told Jeffrey McInnis, director of YSC, that he has “been assigned to investigate the alleged sexual abuse of unknown residents at your facility involving your employee.”

Though the employee is identified in the email, The Times is  withholding the name pending confirmation that MPD considers the employee a suspect. But numerous sources inside DYRS said the employee identified by Det. Grier is the supervisor recently accused of sexually abusing the female corrections officer at YSC.

“I will need to conduct separate interviews of all the residents at [YSC],” Mr. Grier says in his email. “I know it will take some time to facilitate this task, so if we could conduct the interviews next
week, I would greatly appreciate it.”

The sexual abuse accusations come at a sensitive time for Mr. Stanley and the agency, which has struggled with youth escapes, guard beatings and employee morale. Mr. Stanley, the fourth person to lead DYRS in the past two years, recently emerged from a bruising confirmation process during which labor unions representing DYRS employees unanimously disapproved of his nomination as director, based on a perceived lack of pertinent experience and policy differences within the agency.

But after months of hearings and disclosures, including an allegation still under investigation that Mr. Stanley altered a job description to hire a friend at the District’s youth rehabilitation facility, he was confirmed last week without a vote of the D.C. Council, when council member Tommy Wells objected to how the final confirmation hearing was scheduled.

The Times learned of the female officer’s sexual-abuse accusation Thursday and made repeated attempts to obtain the police report.

Officials at the 5th District station, which took the report at YSC, a juvenile detention center on Mount Olivet Road in Northeast, refused to disclose the report.

Instead, The Times was referred to the D.C. police’s central information desk, where a “draft” incident report was disclosed as a traffic report for a $3 fee.

• Jeffrey Anderson can be reached at jmanderson@washingtontimes.com.