Politicians use naming of legislation as part of greater strategy

Feds should keep their noses out of running elections

Should the US boycott the 2022 Winter Olympics in Beijing?

Virginia Republican and Democratic luminaries crisscrossed the commonwealth over the weekend in last-ditch pushes to get their voters to the polls Tuesday for General Assembly elections that history shows likely will have a low turnout.

“The Democratic Senate is the balance in the state government right now,” said Mr. Kaine, calling the Senate “the adults in the room.” 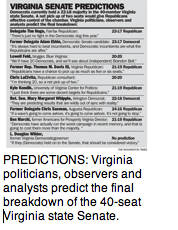 Mr Jesionowski has since resigned for what Mr. Webb called “one of the most disgusting things I’ve seen” in politics.

“If that doesn’t make you [motivated] to try to go out and convince people that this party’s in the wrong direction, I don’t know what will,” he said.

Mr. Cuccinelli, dressed in a leather jacket and jeans Saturday, pointed to his razor-thin, 2007 victory over Democrat Janet Oleszek as an example of how important each vote is.

“You know what they call you when you win by 101 votes?” he asked a crowd in Fredericksburg outside the campaign office of Republican candidate Bryce Reeves, who is challenging seven-term state Sen. R. Edward Houck.

But with no candidate for president, governor on Congress at the top of the ticket, voter turnout is likely to be well below 50 percent — illustrating the importance of each party getting their respective bases to the polls.

“I don’t think there’s that much interest in those races at the grass-roots level,” said former Virginia Gov. L. Douglas Wilder. “You see a lot of signs, but you don’t see a lot of people saying, ‘Boy, we got to get out here.’ Part of the reason is because there is so much emphasis being placed on 2012.”

Still, some local registrars have already reported an uptick in absentee-ballot applications compared with 2007.

In Fairfax County, 10,875 people voted absentee in 2007. And there have been more than 12,500 such applications this year, said General Registrar Cameron Quinn.

The deadline to apply to vote by absentee ballot by mail was Nov. 1, and the deadline for in-person absentee voting was Nov. 5.

“There are isolated spots where … we consider hot races,” he said. “But by and large, there doesn’t seem to be a lot of interest.”

‘Amazing’: ‘Performance of ‘a trillion cicadas’ 17 years in the making

Medical examiner releases cause of death for four at Capitol riot, but not Brian Sicknick