Direction of Virginia legislature likely to hinge on N.Va.

Several races come down to the wire in 'different' year

Republican Party and corporate America embark on a long divorce

Biden, the marshmallow in chief, has learned nothing about Iran and Afghanistan

All 140 seats in Virginia’s General Assembly are up for election Tuesday, but the focus has narrowed to a handful of races, including several in Northern Virginia, that will determine the trajectory of state government for the next several years.

Seven-term incumbent Sen. R. Edward Houck, Spotsylvania Democrat, is in the fight of his political career against Republican Bryce Reeves in District 17.

“This year is much different,” Mr. Houck said. “I’ve never had to take on a Christian political action committee before.”

Mr. Reeves, an insurance company president and a former detective and Army Ranger, hoped his message, based on his experience as a businessman, will take him to Richmond. 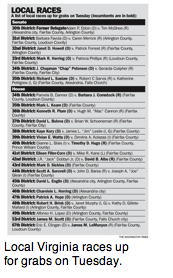 Republican Caren Merrick is a long shot to win the state Senate seat in the 31st District, considering 57 percent of the newly drawn district is in deep-blue Arlington with the rest snaking through Fairfax County and into Loudoun County. But the campaign has taken an odd, rancorous turn toward the issues of gun rights and abortion.

“The fact of the matter is we’re going to see a slew of legislation that will attempt to roll back gun-control measures,” said Democratic candidate Barbara A. Favola, an Arlington County Board member. “How will [Ms. Merrick] vote on these? That’s a real issue. My opponent has not been upfront.”

Ms. Merrick, the founder of the software company webMethods, says such issues rarely pop up when she is talking with voters.

“Those questions are not representative at all of what I’ve heard knocking on doors,” she said. “I’m disappointed that she hasn’t been talking about the issue — jobs and the economy.”

In the 36th District, Jeffrey M. Frederick, a former state delegate who was ousted as chairman of the Republican Party of Virginia in early 2009, is taking on longtime incumbent Linda “Toddy” Puller.

Ms. Puller has made the revitalization of the Route 1 corridor a key plank of her campaign. Last week, she received welcome news when the federal government agreed to provide $180 million for road improvements near Fort Belvoir.

Mr. Frederick estimates that his campaign has knocked on 40,000 doors.

“The campaign’s going well,” he said. “We’re working hard. It’s going to be a close election, so we’re working on turning out votes, and that’s it.”

Mr. Baker, who has taken heat in recent days for calling the federal health care overhaul the “domestic equivalent of the Iraq War,” has been a sharp critic of Senate Democrats’ redistricting plan, which Mr. Barker in large part helped craft.

Still, Mr. Barker says his party split fewer precincts than the Virginia General Assembly did 10 years ago when Republicans controlled the contentious process.

“Every outcome is consistent with where the district is,” he said.

Any of the four races — as well as several others — could help determine whether Democrats retain their 22-18 Senate majority.

Republicans are solidly in control in the House of Delegates, holding 59 seats while two independents caucus with them. But the outcome of several races Tuesday could have significant consequences.

Democrat Pamela Danner is taking on Republican Barbara Comstock, who some see as a potential successor to Rep. Frank R. Wolf, in the 34th District, which Ms. Comstock won by 422 votes over Democrat Margaret G. Vanderhye in 2009.

In Southside, House Minority Leader Ward L. Armstrong, who was redistricted out of his Henry County seat, moved to his nearby mother-in-law’s home to take on Delegate Charles D. Poindexter in the new 9th District.

In what has become one of the most heated — and expensive — delegate races, Mr. Armstrong, who has expressed interest in running for statewide office, has raised more than $1 million with Mr. Poindexter nearly matching that amount.