Biden will be the most sheltered, least seen president since FDR

How to save the Democratic Party

The Bureau of Alcohol, Tobacco, Firearms and Explosives is in the crosshairs for a recent memo prohibiting gun merchants from selling firearms to anyone who uses marijuana, including those with state-issued medical-marijuana cards.

An open letter dated Sept. 21 from Arthur Herbert, ATF assistant director for Enforcement Programs and Services, said that, “any person who uses or is addicted to marijuana, regardless of whether his or her State has passed legislation authorizing marijuana use for medicinal purposes, is an unlawful user of or addicted to a controlled substance, and is prohibited by Federal law from possessing firearms or ammunition.”

That didn’t sit well with Montana Attorney General Steve Bullock, who fired off a letter this week to Attorney General Eric H. Holder Jr. saying that the policy raises “serious legal issues under the Second Amendment, and the Equal Protection and Due Process clauses of the Fifth Amendment.”

The conflict illustrates the contradictory state of affairs between the states and federal government on the subject of medical marijuana. Sixteen states and the District of Columbia have passed medical-marijuana laws, a situation the Justice Department has agreed to tolerate despite continuing to enforce federal laws banning marijuana use. 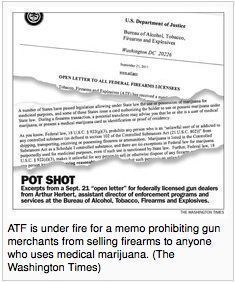 Where the agency draws the line is often a source of confusion. The Sept. 21 letter was issued in response to gun sellers who asked the agency for guidance because buyers were showing them medical-marijuana cards as identification.

Mr. Bullock blasted the ATF for failing to consult with state officials before issuing the directive, saying a cooperative approach “would be much better than the type of unilateral proclamation represented by the ATF letter.”

Critics contend that the law unfairly discriminates against marijuana users because patients who take other controlled substances, such as OxyContin, have no such restrictions. In his letter, Mr. Bullock pointed out federal law allows those who are prescribed controlled substances by a physician to possess or buy firearms and ammunition.

“The ATF letter does not take this into account,” said Mr. Bullock, who called on the department to work with the states in “exploring a reasonable solution to the problems created by the Bureau of Alcohol, Tobacco, Firearms and Explosives letter.”

Mr. Herbert states in his letter that marijuana, as a Schedule 1 controlled substance, cannot be prescribed under federal law, “even if such use is sanctioned by state law.”

Potential gun buyers must state on an ATF form whether they use marijuana at the time of sale. If they answer “yes,” they are denied the purchase, but even if they answer “no,” the seller cannot complete the sale if there is “‘reasonable cause to believe’ that the person is an unlawful user of or addicted to a controlled substance,” according to the directive.

“The dealers have no way of knowing whether someone smokes pot unless they come in toking,” said Gun Owners of America executive director Larry Pratt. “It’s just one more way to aggravate the dealers and play ‘gotcha’ with the dealers. They [the ATF] are totally out of control.”

In an editorial this week, the Denver Post blasted the directive, calling it an “assault on constitutional rights.” Colorado voters legalized medical marijuana in 2000.

“[U]sers of medical marijuana are faced with two choices: pass on gun ownership or illegally lie about their use of marijuana,” the Post said. “Unbelievable.”

Morgan Fox, spokesman for the Marijuana Policy Project, said his organization is drafting a letter asking the ATF to use its discretion “to be more compassionate toward medical-marijuana patients.”

“The ATF said their hands were tied, but that’s not the case,” Mr. Fox said. “This is just another way to single out and harass medical-marijuana patients.”

Montana voters legalized medical marijuana in 2004, but its use exploded after the Justice Department’s 2009 memorandum saying federal authorities would not target marijuana users as long as they comply with state law, Montana Justice Department spokesman John Doran said.

“We went from 3,000 to 30,000 medical-marijuana cardholders in the space of about a year,” he said. “We also saw an increase in the number of types of businesses.”

Those included so-called “cannibis caravans,” which traveled throughout the state signing up people for medical-marijuana cards. Often there was no doctor on site, but rather a doctor from another state who spoke with patients via computer, Mr. Doran said.

The Montana legislature cracked down on the industry earlier this year with a bill that repealed the voter-passed initiative and replaced it with tighter restrictions. In response, advocates gathered enough signatures to place the more liberal version on the November 2012 ballot.

“States, including Montana, have acted to address problems and explore workable solutions,” Mr. Bullock said. “In doing so, however, we also face issues that are, candidly, created or exacerbated by federal actions and policies that do not always reflect the kind of careful approach and appropriate accommodation that should be accorded the states.”