LISTEN: Why do our kids embrace communism? The Rebellion Podcast with Everett Piper

Carrie Underwood graced the cover of her last album, “Play On,” with a daisy in her hair and casual clothes on her back. The same person makes an appearance on the “Blown Away” cover, but this time she’s wearing a designer dress and gazing fiercely into the distance, looking like a cross between Wonder Woman and a runway model. It’s a pretty silly photograph, to be honest, but it does drive home one crucial point: Miss Underwood is not built like other country stars.

In a genre that’s become increasingly populated by girls who write their own tunes, Miss Underwood has risen to the top on the strength of her voice alone. It’s a solid instrument, as flawless as her airbrushed skin on the “Blown Away” cover, and it can wring raw emotion out of the driest of songs. On her newest release, though, Miss Underwood attempts to prove herself as a powerhouse songwriter, too, co-writing more than half of the album’s fourteen tracks.

On “Good Girl,” she writes a melody line that caters to every last inch of her voice, paying attention to the high, show-stopping glory notes that’ve been her bread and butter for years. “Two Black Cadillacs,” an original country-rock anthem filled with power chords and vocal acrobatics, does the same thing. Clearly, this is a musician who knows how to showcase her singing chops.

As a lyricist, though, Miss Underwood tends to limit herself to the same subjects that fill country-pop songs, meaning there’s a lot of scorned women, rural hometowns and former flames lurking around these tunes. “One Way Ticket,” her biggest attempt at thinking outside the box, finds her comparing life to county fair food (“Life is so good, it’s sticky sweet / It’s a carnival cotton candy treat”) while some poor studio band kicks up a tired reggae beat in the background. Really, is this stuff worth singing about?

Whenever another songwriter takes the helm, though, “Blown Away” shows what Miss Underwood can do with material that’s as good as her voice. The title track may be the catchiest thing she’s ever done, not to mention the best evidence that she can sing about darker subjects — child abuse, homicide and the kind of revenge that goes far beyond the torn-up car seats in “Before He Cheats” — with as much conviction as her family-friendly love songs. She tones things down without losing her mojo on “Do You Think About Me,” where her soft, understated voice matches the song’s stripped-down arrangement.

Those sturdy vocals sound great on everything, of course, but Miss Underwood only hits her stride when she sings something worthy of her voice. “Blown Away” hits the mark about half of the time. 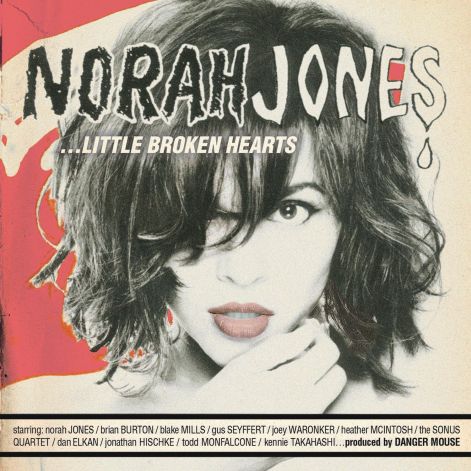 It’s been a decade since Norah Jones released “Come Away With Me,” a collection of mellow torch songs and jazzy folk tunes. She’s branched out significantly since then, collaborating with alt-country stars such as Ryan Adams one minute and joining projects such as Rome, an indie rock supergroup with an appreciation for spaghetti western music, the next. On “Little Broken Hearts,” a breakup album recorded with producer Danger Mouse, she explores even more territory.

“Say Goodbye,” with its electro-pop arrangements and cooing vocals, is more reminiscent of 1980s New Wave than the coffeehouse fare Miss Jones served up with her debut. The rest of the album takes its cues from other sources. Songs such as “Out on the Road” and the moody title track sound like something from a Quentin Tarantino soundtrack, while “Happy Pills” is modern-day indie pop at its finest, all keyboard trills and robotic percussion.

Breakup albums can be slow-moving, but “Little Broken Hearts” barrels along at a swift pace. Even songs like the sad-eyed “She’s 22” manage to make heartbreak sound like something charming, and Danger Mouse decorates every song with a heavy hand, piling reverb onto her voice like a 21st-century Phil Spector and drenching the ballads with smoky, atmospheric arrangements.