Catholics, other faiths to push back

President Obama has elicited an election-year backlash from Catholics and voters of other faiths with his administration’s decision to require religious hospitals, universities and other organizations to provide birth control coverage despite their moral opposition.

“President Obama has declared open season on pro-life health care providers,” said Douglas Johnson, vice president of the National Right to Life Committee in Washington. “If he’ll do this when he’s facing a difficult re-election, imagine what he’s going to do when he’s re-elected and the gloves come off. That’s the message we’re taking to our people.”

Bishops across the country have been urging their congregants to oppose the new rule, announced Jan. 20 by Health and Human Services Secretary Kathleen Sebelius. In at least 125 dioceses in the country, letters of protest have been read from the pulpit at Mass. Some bishops warned of civil disobedience.

“We cannot — we will not comply with this unjust law,” said the letter from Bishop Thomas Olmsted of Phoenix. “People of faith cannot be made second-class citizens.”

Days after the decision, the NRLC formed a super PAC to raise money to focus primarily on defeating Mr. Obama and electing a pro-life president. 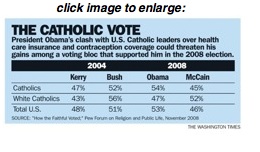 The nonprofit Catholic Advocate in Washington, a national grass-roots organization aimed at supporting policies and candidates consistent with church teachings, organized a letter-writing campaign protesting the decision. By Friday morning, the effort had attracted members from at least one parish in 160 congressional districts in 45 states, said Matt Smith, president of the group.

“People are standing up and paying attention,” Mr. Smith said.

But heading into this election, Mr. Obama was already on shakier ground with Catholics against Republican front-runner Mitt Romney. A Pew poll taken in early January, before the administration announced its decision on birth control, found that white Catholics favored the former Massachusetts governor, a member of the Mormon faith, by 53 percent to 40 percent. Mr. Obama held a slight lead among all Catholics, including Hispanics, a group that voted for him nearly 2 to 1 four years ago.

Republicans criticized the rule, with Mr. Romney saying, “President Obama orders religious organizations to violate their conscience,” and Newt Gingrich calling the action “a radical new rule that uses the health care law to require all health insurance providers to cover abortion-inducing drugs and sterilization as well as contraception, all free of charge.”

Catholics play an important role in battleground states. National Journal reported that Catholics in 2008 made up 32 percent of the vote in Nevada, 30 percent in Wisconsin, 28 percent in Pennsylvania, 25 percent in New Mexico, 18 percent in Ohio, 17 percent in Iowa and 13 percent in Florida and Missouri. All are states that the Obama campaign is targeting again this year.

In Florida, Mr. Obama has found an outspoken opponent in Republican Sen. Marco Rubio, who introduced a bill last week to override the new rule.

“This is a common-sense bill that simply says the government can’t force religious organizations to abandon the fundamental tenets of their faith because the government says so,” said Mr. Rubio, the only senator this year endorsed by Catholic Advocate.

The president had been lobbied hard by pro-choice supporters to implement the new rule on contraception. And Mr. Obama had already angered that important part of his base with his administration’s decision in December not to allow anyone under age 17 to purchase the emergency contraceptive Plan B without a prescription.

Planned Parenthood President Cecile Richards said: “Full birth control coverage matters to women from all corners of this country — and when it mattered most, President Obama stood strong against efforts to take it away.”

Although administration officials wouldn’t discuss the political ramifications, a senior White House official implied that Catholics by and large would accept the decision.

“Ninety-eight percent of Catholic women have used contraception,” the official said, speaking on the condition of anonymity. “We think it is a balanced approach that tries to respect religious beliefs.”

White House press secretary Jay Carney said the administration balanced its approach by exempting churches from the rule, and allowing affected institutions up to a year to implement the change.

• Dave Boyer can be reached at dboyer@washingtontimes.com.