Quiz: Do you remember these grumpy TV characters?

Quiz: Can you pass a U.S. Constitution test?

Executive orders are not unifying

A prayer for the Biden administration and the nation

Should extreme pro-abortionist Xavier Becerra be in charge of America’s health care?

Should D.C. become a state?

If you’ve ever wondered whether America’s near-tribal political polarization extends to romance — whether an Ann Coulter-Keith Olbermann wedding would, in fact, be weirder than a Herman Cain campaign advertisement — social science at long last has provided a tentative answer.

Conservative Republicans are more likely to be uncomfortable with public displays of affection. Liberal Democrats are less likely to disapprove of one-night stands. When it comes to amorous relationships — from dating etiquette to what people desire in mates — singles at opposite ends of the political spectrum are as different in the bedroom as they are at the ballot box.

Also, conservative Republicans are more likely to experience orgasms. But more on that shortly.

Such are the results of “Singles in America,” a wide-ranging new survey of more than 5,000 single adults designed by the University of Binghamton’s Institute for Evolutionary Studies and conducted in conjunction with the dating website Match.com. 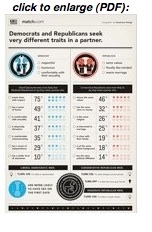 “Liberals and conservatives are looking for entirely different things,” said Helen Fisher, a biological anthropologist at Rutgers University who specializes in love and sexuality and consulted on the survey. “Their attitudes toward romance and how they court are really dramatically different. There’s almost no overlap.

“Like everyone else, I’ve always sort of assumed that the values in the voting booth would bleed into social and personal life. But now I have the data to prove it.”

In the survey, singles of various ethnic, geographic and socioeconomic backgrounds were asked 135 questions about their romantic lives and attitudes. They also were asked to self-identify as conservative Republican, liberal Democrat, a moderate of either party, independent or Libertarian.

According to Ms. Fisher, the greatest differences were found between the first two groups — particularly when asked about the qualities they “must have” in a romantic partner.

Conservative Republicans were more likely to say they must have someone of the same political, religious and ethnic background who shares the same values and attitudes about money and wants to marry.

By contrast, liberal Democrats were more likely to say they must have a partner with a sense of humor and independence who can articulate his or her needs, respects them, is physically attractive and comfortable with his or her sexuality, and has the same educational level.

Why the sharp differences? Ms. Fisher, author of “Why We Love: The Nature and Chemistry of Romantic Love,” said the answer might lie as much in brain chemistry as in professed political and cultural values.

For example, while a majority of men and 90 percent of women checked the “must have” survey box for “sense of humor” — a quality that itself is both a longtime online dating and Playboy centerfold questionnaire cliche — conservative Republicans were the least likely to select it.

According to Ms. Fisher, adult humor generally plays on the unexpected, something conservative Republicans may dislike because of biology.

“There is more and more data indicating that there is a biological basis to your political views,” Ms. Fisher said. “I’ve found in other studies that Republicans are more likely than other political types to be expressive of traits linked with the serotonin system.”

Serotonin is a chemical neurotransmitter produced by the body that is believed to influence social behavior and feelings of well-being and happiness.

“Among those traits, Republicans are less comfortable with the unexpected,” Ms. Fisher said. “They like order, predictability and the familiar.

“Moreover, Republicans are quite concerned with values, following the rules and being respected, more traits that are founded in the serotonin system. So when faced with a ‘must have’ question, they may think only in terms of values and regard sense of humor as less essential.”

The contrasts extend to courtship and cohabitation. Conservative Republicans — particularly women — were less likely to engage in office romance, less likely to approve of kissing in public and more likely to want to take a man’s name in marriage and expect a man to pay for a date regardless of who initiated it.

Liberal Democrats, on the other hand, were significantly more likely to maintain a separate bank account from a romantic partner, have regular nights out with friends and value separate interests and personal space.

Liberal Democratic men also were far more likely to date someone from a very different family structure and commit to a partner who was a decade older.

“Independents were the least likely to tell a date how they vote,” Ms. Fisher said with a laugh. “That’s why they’re independents!”

In the bedroom, conservative Republicans were much as you’d expect, less likely to approve of sex before marriage, friends-with-benefits arrangements and one-night stands. They also were less likely to have participated in the latter.

That said, the gap between the two groups was hardly enormous: 49 percent of conservative Republicans said they have had a one-night stand, compared to 65 percent of liberal Democrats.

“The main difference is that liberal Democrats don’t feel as guilty about it,” Ms. Fisher said.

While conservative Republicans were less likely to have had sex in the past 12 months — one-fifth had had no sex at all — they also were more likely to experience orgasms.

According to Ms. Fisher, that number dovetails with both groups reporting the greatest sexual satisfaction within a committed relationship, either marriage or cohabitation.

“The one requirement for achieving orgasm is being relaxed,” Ms. Fisher said. “My hypothesis is that conservative Republicans have very clear values, and when you have that, you’re simply more relaxed. That plays out in the bedroom. Conservative Republicans also are more likely to not have sex on the first date. They get to know the other person, and as you do that, you’ll be more relaxed.

“Moving from courtship to committed relationships, people are more likely to be in love and not just sexually attracted to each other. A couple has a whole support system. They have a dog at home. Good sex is linked with those kind of relationships.”

Perhaps the most striking point of red-blue romantic division came when those surveyed were asked about dating someone with strong opinions: Conservative Republicans were more likely to consider that a turnoff, while liberal Democrats were more likely to label the same quality a turn-on.

“Liberals like ideas,” Ms. Fisher said. “They’re more likely to want to play with them, more excited by theory and nuance, more interested in people who can challenge their opinion. They don’t live as much in black and white.

“To be honest, though, I wonder how meaningful that answer is for conservatives. They may be very turned on by strong opinions as long as they’re shared opinions. We didn’t designate what kind of strong opinions.”

Though conservative Republicans and liberal Democrats often seem to hail from different solar systems, there’s one surprising area of political and romantic convergence on which both sides agree: They’re more forgiving of personal infidelity than cheating by a politician.

“That flipped me out,” Ms. Fisher said. “Totally. I can’t conceive of caring more about my president than my own partner. My best guess is that we see ourselves in a world community and that our president represents us — our friends, our families, our region and our values. So we’re sticklers about his or her behavior more than we are about our own.

“It also may be a little bit of a backlash against all of these [cheating] governors and senators and presidential hopefuls, the disgust that Americans have right now.”

“I think the problem [Mr. Gingrich] has had with female voters will continue,” she said. “Watching the debates, I thought to myself, ‘You know, conservative Republicans as a group do not really approve of this. Had he run as a Democrat, this may not have been as much of a problem.’”

Given their seemingly deep-seated differences, can liberals and conservatives find romantic bliss with each other? Or are high-profile, married political consultants James Carville and Mary Matalin the red-blue exception that proves the rule?

Translation? Don’t expect to debate your way into compatibility. Instead, Ms. Fisher said, aim for lasting, mutual respect — agreeing to disagree in a way that the American political system currently can’t seem to accomplish.

Of course, that’s easier said than done: Recently, Ms. Fisher, a self-described Democrat, dated a conservative Republican man. The two agreed not to discuss politics or religion. All was well.

At first, that is.

“I ended the relationship when he told me, quite formally, that he didn’t believe in evolution,” she said. “My Ph.D. is in human evolution, and I’ve written five books and many papers on aspects of human evolution.

“These values are very different. So at some point, you’re going to have to make peace with it or break up.”

No love lost as Trump prepares to leave capital city

Democrats say case against Trump is solid even if U.S. Capitol attack was pre-planned

FBI, Justice Department knew there was no Russia collusion by spring of 2017

Forged by the sea: US Navy surface ships

Chuck Todd blasts Republicans for not appearing on his show

NRA files for bankruptcy protection, will seek to reorganize in Texas

Quiz: Name the states that these historical events took place