Everett Piper: In America, the goverment is us Listen to The Rebellion Podcast

NEW: The Unregulated Podcast With Mike McKenna and Tom Pyle

‘Show me an elitist, and I’ll show you a loser’

The honeymoon is over. In the first presidential race since a 2010 Supreme Court ruling gave rise to independent political groups that can spend millions of dollars, an early flirtation with using “super-PACs” for positive ads has devolved into their clear role as weapons of mass destruction.

Two Republican presidential candidates’ super-PACs, among the largest, stayed entirely positive and declined to escalate the arms race. And, as of last week, those candidates, former Utah Gov. Jon Huntsman Jr. and Texas Gov. Rick Perry, are both out of the race for the GOP nomination.

Still standing are those whose super-PACs had no such reservations about going blisteringly negative and saturating the airwaves. Ninety percent of the independent spending in Florida, with its Jan. 31 primary, has been negative. In November, only 7 percent of $3 million in expenditures were negative.

As the Citizens United vs. Federal Election Commission court ruling turned two years old on Saturday, this is its legacy.

Negativity has begotten negativity — driven chiefly by the war chest of the super-PAC linked to former Massachusetts Gov. Mitt Romney, Restore Our Future, which has spent more than $10 million on former House Speaker Newt Gingrich alone. 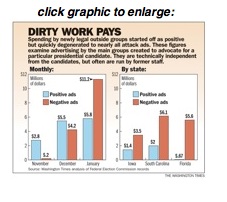 Though the political action committees must be independent from campaigns by law, they quickly sprouted up specifically to support each of the major presidential candidates, staffed by former top aides who did not need to be told what the candidates wanted and financed by a few of the candidates’ wealthiest supporters. In some cases, they have made more of a public impression than the official campaigns.

Even as they test the limits of technical independence, the groups have every incentive to do dirty work while candidates present a positive image.

“There’s less accountability for going negative, because not everyone knows one particular super-PAC is affiliated with a candidate,” said John Wonderlich, a campaign-finance policy expert at the Sunlight Foundation.

A group financed in part by Mr. Huntsman’s father spent $2.3 million promoting a candidate who lacked campaign donors and a poll presence, but the candidate bowed out of the race before his father, one of the wealthiest men in Utah, dug any further into his pockets.

Make Us Great Again, which advocated for Mr. Perry, ran $4 million in ads. Mr. Perry and the super-PAC mounted a strong financial showing in mid-2011 only to see his popularity fizzle. But the super-PAC never tapped that reservoir to claw back at his competition with attacks.

Another candidate who emerged early in the race only to be left for dead was not so willing to stay positive at all costs — even if it meant breaking promises. That candidate, Mr. Gingrich, has risen from the ashes to become a top contender.

Mr. Gingrich pledged to “disown” Winning Our Future, a super-PAC formed by a former aide, if it “runs a single negative ad” — before both made a dramatic about-face, one followed by a victory by Mr. Gingrich in the South Carolina primary on Saturday. Winning Our Future spent nearly a million dollars on positive ads until Jan. 10. Since that date, it has spent $3.3 million savaging Mr. Romney.

Even former Sen. Rick Santorum of Pennsylvania, a lower-tier candidate running on family values, caved to the pressure Friday after 15 positive buys, attacking Mr. Gingrich in phone calls to South Carolina voters. The Romney group had shifted its sights to Mr. Santorum for the first time in a weeklong spurt of ads ending Thursday.

And as the public employees union AFSCME dropped $1 million against Mr. Romney on Friday on an ad tying him to Medicare fraud, the specter was raised of a point at which liberal groups will be persuaded that Mr. Romney will be the party’s eventual nominee and will attempt to get a head start on the general election, unloading on Mr. Romney and courting independent voters.

A sleeping beast lies in Priorities USA Action, which a top political operative of President Obama, Bill Burton, left the White House to take charge of.

Mr. Obama, too, it would seem, has joined the race in the two years since Citizens United, with the super-PAC of his own — funded in part by lobbyists — even as he decries the court ruling and vilifies opponents for their campaign-finance practices.

‘Disgusted’: Biden’s support from police has disintegrated in just under nine months

Top 10 six shooters of all time

Quiz: How much do you know about the Vietnam War?