LISTEN: Talking to the Taliban An American peace negotiator on the future of Afghanistan

Quiz: Can you name the actors who played these 1980s TV characters?

‘It ain’t easy’: California pastor stands up against state power for right to religious freedom

Weighing the theatrics around the Chauvin verdict

Have you gotten a COVID-19 vaccination?

A D.C. man who faced criminal charges for using an unregistered gun to kill a pit bull as it mauled a neighborhood boy is now raising funds for the 11-year-old victim to help him cope in the aftermath of the vicious attack.

The effort comes amid an outpouring of support from gun-rights activists offering to raise money for Benjamin Srigley, 39, who was ordered to pay a $1,000 fine as part of an agreement he would not be charged with a crime.

“People asked ‘Is there a hero fund or something we can do?’ I looked around and didn’t find anything,” said Peter Upton, who runs the Second Amendment Check website and decided to start a fund for Mr. Srigley.

But as Mr. Srigley learned about the campaign that was registered on the fundraising website Pledgie.com in his honor, he urged those who wanted to support him to instead donate money to his neighbor, 11-year-old Jayeon Simon. 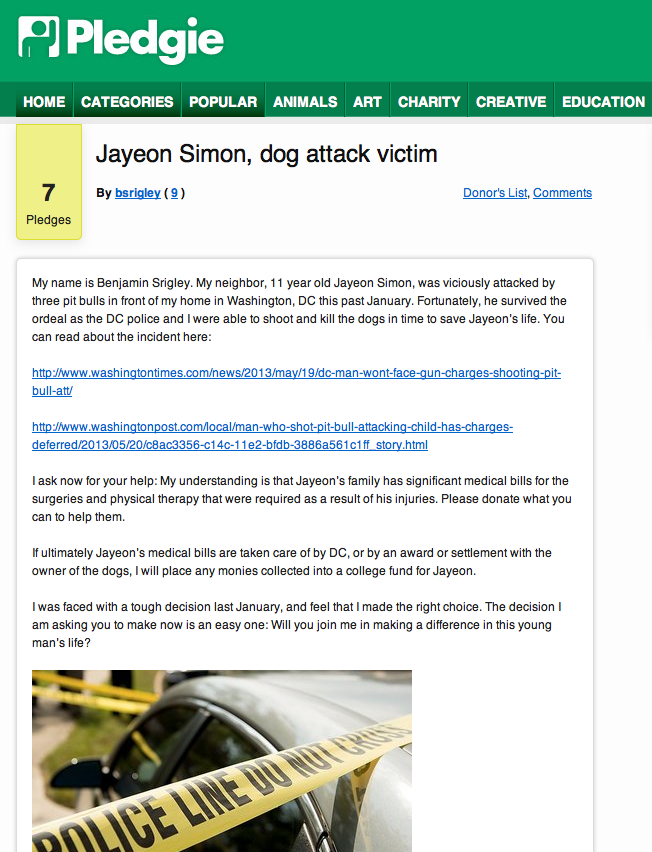 “I am truly touched and very grateful for all the public support that I have received.” Mr. Srigley wrote on the campaign website. “If you can only afford to make one donation, I would prefer that you give the money to Jayeon.”

As Mr. Srigley’s case is still active in court, he has declined to talk publicly about the incident but did verify the authenticity of the fundraising campaign for Jayeon.

Three pit bulls attacked Jayeon as he and a friend rode bicycles in their Brightwood neighborhood on a Sunday afternoon in January. Witnessing the attack on his neighbor, Mr. Srigley went inside his home to retrieve his Ruger 9 mm pistol. He came out and began firing at the dogs as they mauled Jayeon in the alleyway behind his Northwest D.C. home. Mr. Srigley’s gunfire struck and killed one of the dogs and attracted the attention of a nearby Metropolitan Police Department officer, who responded to the scene and shot the other two dogs.

Jayeon’s family and authorities credit Mr. Srigley with saving Jayeon’s life. But because Mr. Srigley’s handgun, and two others he owned, were not legally registered in the District, he potentially faced criminal charges.

Prosecutors struck a deal this month, agreeing not to go forward with criminal charges as long as Mr. Srigley, who has no prior criminal record, paid the $1,000 fine and avoids getting into any trouble for the next two months.

Though Jayeon’s wounds from the attack have healed, leaving deep scars on his elbow, torso and leg, his family said he hasn’t been the same since then.

“He’s coming around, but he’s still not himself,” said Chris Speight, 45, a cousin who helps care for Jayeon.

The boy who Mr. Speight said was once eager to play with his siblings or other children in the neighborhood, sat on his front stoop passively watching the others on a recent afternoon. Quietly responding to a reporter’s questions about the incident with timid “yes” and “no” answers, Jayeon said he no longer rides his bike in the neighborhood. It’s not because of the dogs, he insists. Rather his bicycle chain is broken, he said.

The family is investigating whether the dogs’ owner had any form of insurance that would help pay for counseling.

“If the guy wanted to start a fund for Jayeon, that wouldn’t hurt. It would only help,” said Mr. Speight, who was unaware of the fundraising effort that began Friday.

As of Tuesday, the fund for Jayeon had raised $350.

“If ultimately Jayeon’s medical bills are taken care of by DC, or by an award or settlement with the owner of the dogs, I will place any monies collected into a college fund for Jayeon,” Mr. Srigley wrote on the Pledgie.com website.

‘Desperate and unpredictable’: Rats turn to household trash when restaurants shut down

Cop fired over Kyle Rittenhouse support: ‘Thank you for your courage … you’ve done nothing wrong’

A toke with that shot? Vaccine incentivized in D.C.