Politicians use naming of legislation as part of greater strategy

Feds should keep their noses out of running elections

Should the US boycott the 2022 Winter Olympics in Beijing?

Escorted by a half-dozen handlers armed with nets, waterproof cameras and pink and blue plush terry-cloth towels, twin Sumatran tiger cubs took their swimming test Tuesday, proving they could fend for themselves — at least within the walls of the National Zoo.

The precautions might seem excessive, but with more zoos embracing the concept of “naturalistic” exhibits, animal keepers have found themselves working to help orient captive-born animals to a habitat they will never know. And that’s why Tuesday’s swim was not just a test for the 3-month-old animals.

“We want to be responsible, but also responsible caregivers,” said Craig Saffoe, Great Cats and Bears curator at the National Zoo. “They are really cute, but we have to respect them and let them be tigers.”

To the delight of the crowd of zoo members and media, male cub Bandar, named for the southern port city of Bandar Lampung in Sumatra, and his sister, Sukacita, which means “joy” in Indonesian, passed their test in the chilly water and returned safely to their mother, Damai. 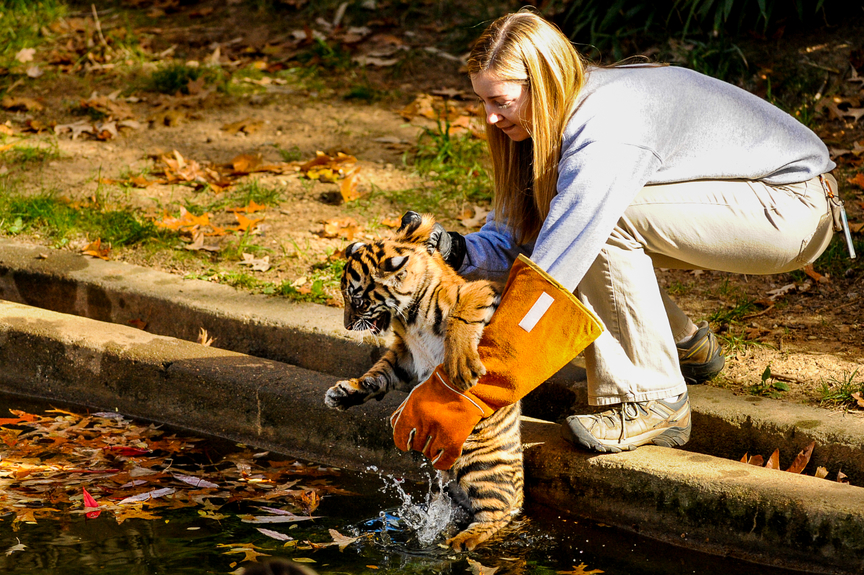 Dell Guglielmo, an animal keeper for the Great Cats Exhibit, was in the moat wearing a wetsuit and was on hand for an emergency.

She said Tuesday’s dunk was the cub’s official introduction to the water.

“This was a survival instinct,” Ms. Guglielmo said. “We’re completely hands-off with the cubs at this point.” 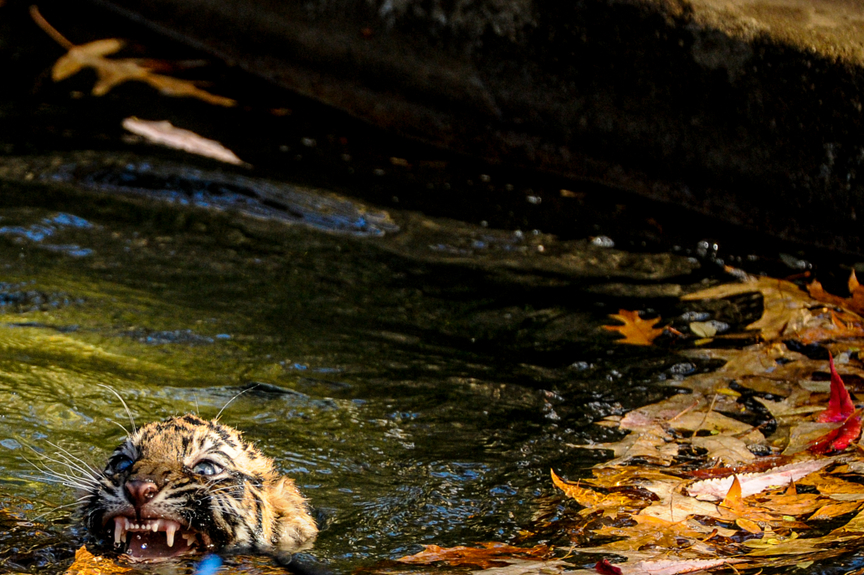 Knowing when to take a step back is the balance that Associate Director of Animal Care Sciences Donald E. Moore III said he and his staff work to achieve every day at the zoo.

Mr. Moore said the “renaissance” of exhibits began in the 1980s and 1990s, when animal enclosures became more than just a large concrete block. Zoos began to emphasize a more “naturalistic” setting for their animals, he said, but with that change in design, keepers had to consider any possible dangers that could present themselves in a more natural habitat. 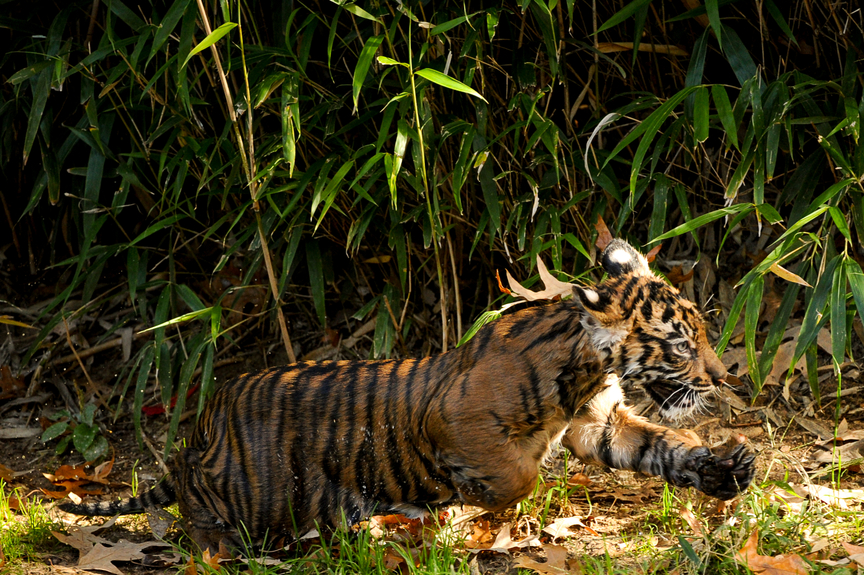 In late June, the zoo’s male red panda disappeared from its outdoor enclosure, only to be found about a mile away near Adams Morgan. Keepers said a low-hanging branch in his natural exhibit likely aided his breakout.

Also in the back of the minds of the zoo’s cat keepers is the news about the 3-week-old Sumatran tiger cub at the London Zoo in England, which drowned in its exhibit pool last month.

Tuesday’s swim test was held two weeks before the cubs are scheduled to make their public debut.

The Great Cats Exhibit is surrounded by a moat where the water depth ranges from 3 feet to 12 feet. The National Zoo conducted a swim test for its seven lion cubs in 2007 and the three Sumatran tiger cubs born in 2006.

Echoing Mr. Moore’s comparison of science and art within animal behavior, Mr. Saffoe said while it was important to ensure the tigers could learn to swim on their own, had one started to sink or drown keepers would have intervened, just as a parent assists a child at a pool.

“Science tells us they are mammals, art tells us they might sink,” Mr. Saffoe said. “We can’t afford to lose one, and that was the point of what we did today.”

‘Amazing’: ‘Performance of ‘a trillion cicadas’ 17 years in the making

Medical examiner releases cause of death for four at Capitol riot, but not Brian Sicknick