NEW: Slavery and the Constitution An interview with Heritage Foundation president Kevin Roberts

Reporters in Gaza have never been free

Why Biden’s inflation is seemingly uncontrollable

America’s aging tactical Air Force — the jets that protect ground troops and strike hard-to-reach targets — is shrinking just as the Pentagon is cutting even more planes to achieve nearly a half-trillion dollars in spending cuts.

The trend has set off alarms among retired fighter pilots, some of whom wrote to Congress last month warning that U.S. “TacAir” is in trouble.

They fear the political pressure to drive down the deficit will mean there will never be enough money to replace 1970s jets with advanced aircraft to operate against rising militaries such as China’s, which last year unveiled its own stealth fighter, the J-20.

“With the exception of our airlift fleet, we have a geriatric Air Force,” said retired Lt. Gen. David A. Deptula, a former F-15 Eagle pilot and Operation Desert Storm war planner. “We’re flying fighters that are 30 years old. What people seem to miss is, a fighter is not like an airliner, where you take off from Point A and go to Point B. Our pilots put six to nine [gravitational forces] on these things every day.”

Gen. Deptula, who now heads the Mav6 LLC aerospace company, pointed to a 2007 event that has come to symbolize the collection of elderly fighter jets: An Air National Guard F-15C, the premier air superiority jet, broke apart in the sky during combat training. The pilot ejected safely. 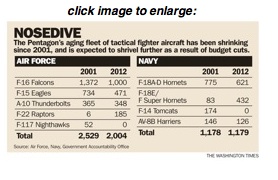 The Air Force grounded the entire F-15 fleet and later attributed the breakup to a manufacturing flaw in some aircraft dating back to the 1970s.

The average age of an Air Force fighter is now 22 years, nearly double what it was in 1999, and an age at which fighter jets usually are retired. The service faces a shortfall of 100 to as many as 800 fighter jets by 2024. As a result, it is being forced to invest millions of dollars in older F-16s to extend their life spans.

“We’ve got to recapitalize our force if, in fact, we’re going to be able to provide the nation what it needs, what it’s come to expect, in terms of aerospace capability,” said Gen. Deptula, who took part in several Pentagon studies on the military’s future. “We’ve known about this for 20-plus years.”

By the numbers, the Navy, which flies a fighter fleet about half the size of the Air Force’s, seems to be doing better.

After 10 years of frequent carrier deployments during two long wars in Afghanistan and Iraq, the Navy has almost the exact same number of fighters — 1,179 — as in 2001. It has retired older F-18 Hornets in favor of newer F-18E/F Super Hornets.

Yet it too faces a projected fighter gap of required missions compared with available aircraft. The Navy plans to do life-stretching work on 150 older F-18s, from 8,600 flight hours to 10,000 to ensure the gap does not exceed 50 planes.

John E. Pike, a longtime military analyst who directs the GlobalSecurity.org research website, said President Obama’s military strategy, which ditches the demand that the armed forces be able to fight two big land wars at once, means the Air Force and Navy have a sufficient number of fighters.

This is the point Mr. Panetta and the top brass are making to justify smaller armed forces overall.

Their strategic guidance paper calls for increased spending on unmanned aircraft, such as the missile-carrying MQ-1 Predator and the larger MQ-9 Reaper. The Pentagon has spent the past 10 years perfecting precision-guided bombs that allow one pilot to hit multiple targets.

“The Air Force has made the hard choices to closely align with the new strategic guidance in our [fiscal 2013] budget submission by trading size for quality,” the Air Force leadership said. “We will be a smaller but superb force that maintains the agility, flexibility, and readiness to engage a full range of contingencies and threats.”

The Pentagon is juggling the retirements of some old planes and the refurbishments of others as its newest fighter keeps hitting turbulence.

The F-35 joint strike fighter is a multirole stealth aircraft that was supposed to be entering the fleet in large numbers two years ago. But it remains dogged by huge cost overruns and technical failures.

At $382 billion for 2,443 planes, the F-35 Lightning is the most expensive weapons system ever, and perhaps the most important, given it is the long-term replacement for three venerable aircraft: the F-18 Hornet, F-16 Falcon and AV-8B Harrier.

Each F-35 has doubled in cost to more than $130 million, and the aircraft will not reach full production until 2018 as the current fighter fleet keeps aging.

“In so many different respects, the F-35 program truly represents a tragedy,” Sen. John McCain, Arizona Republican, said in a December floor speech. “The Air Force, Navy and Marine Corps desperately need new aircraft to take the place of the current strike and fighter jets that have been at war for most of the last 10 years. These well-worn legacy aircraft are coming to the end of their service lives.”

“It is critical to recognize that the capabilities afforded by the Air Force require investment,” the group wrote. “Major recapitalization was deferred for the past 20 years, yielding a fleet that averages a quarter of a century in age.”

They added: “While other branches within the Department of Defense experienced significant growth in the post-9/11 environment, the Air Force’s share of the budget declined below 20 percent — a record low. Key modernization efforts were canceled, often derided as Cold War relics, and major portions of the fleet were filled with aircraft optimized for the permissive environments of Afghanistan and Iraq. In truth, this approach emphasized short-term operational demands over long-term global realities.”

Gen. Deptula, one of the signers, said the only remedy is to make the F-35 work and buy it.

“You don’t want to go out and buy new old stuff because F-16s and F-15s and F-18s are not survivable against modern threats,” he said. “You need fifth-generation capabilities that are resident on F-35 and F-22. They are much more capable than their predecessors in a variety of different functions and roles.”

“The larger problem is that the world that we have inherited is one in which bad people need to be dissuaded or disabled with the least cost in American blood and treasure,” Gen. Link said. “And air and space power provide the best means to do that.

Mr. Gates’ final decision to terminate the F-22 Raptor at 187 aircraft, less than half the original plan, still rankles the fighter community.

“It was a heinous mistake and grossly uneconomical,” said Gen. Deptula. “It just boggles the mind that Gates terminated the F-22 at less than one-half of the military requirement, when in fact all the research and development money had already been spent and we had come down on the learning curve to the point where we were producing the airplane at $130 million to $140 million a copy. And you terminate the production line when you finally got to optimal economic production?”

• Rowan Scarborough can be reached at rscarborough@washingtontimes.com.