Economic freedom versus the negative effects of Democratic socialism

When brilliance and ignorance collide

Are you amazed about what your fellow humans conceive and create when it comes to technology — the iPhone, 5G, the Tesla, rockets that land upright after being fired, artificial hearts, etc., etc.? Are you also amazed by the willful ignorance of history and economics shown every day by the political and media class?

Engineers who ignore the laws of physics find themselves unemployed. Politicians who ignore basic historical and economic truths often go on to leadership roles with the aid of corrupt and/or ignorant members of the media.

When it comes to economic policy and political organization, it should be obvious to any sentient human that Switzerland has a far better model than Venezuela.  Many in the left-leaning media and certain politicians (such as Bernie Sanders) spent years praising the Chavez revolution in Venezuela, even though the economic and human rights disaster the country has become was easily foreseen by anyone with a basic knowledge of history.

There was some good news from this past week’s election that the U.K. will now almost certainly get its independence back, and that most of the British voters rejected socialism. However, millions of British still voted for the socialists, despite the fact that socialism has been an unmitigated disaster wherever and whenever it has been tried.

It results in death and despair, poverty and oppression — yet all too many buy the fraud rather than the reality. It now has been four decades since Margaret Thatcher was elected and saved Britain from its earlier socialist experiment.  Those voting socialist this time were probably either too young or stupid to remember the misery socialism wrought.

For the past three decades, the Fraser Institute in Canada (along with many economic policy organizations from around the world) and the Heritage Foundation have each produced an annual report on the state of economic freedom by country.  Economic freedom has been growing despite many ups and downs and, as the world becomes more economically free, it also becomes more prosperous. Economic freedom is highly correlated with economic well-being, and increased life spans and happiness.

In both indices, Hong Kong has had the top spot for economic freedom. Unfortunately, that laudable distinction is probably about to end because the Chinese communists, like their socialist brethren almost everywhere, fear freedom. 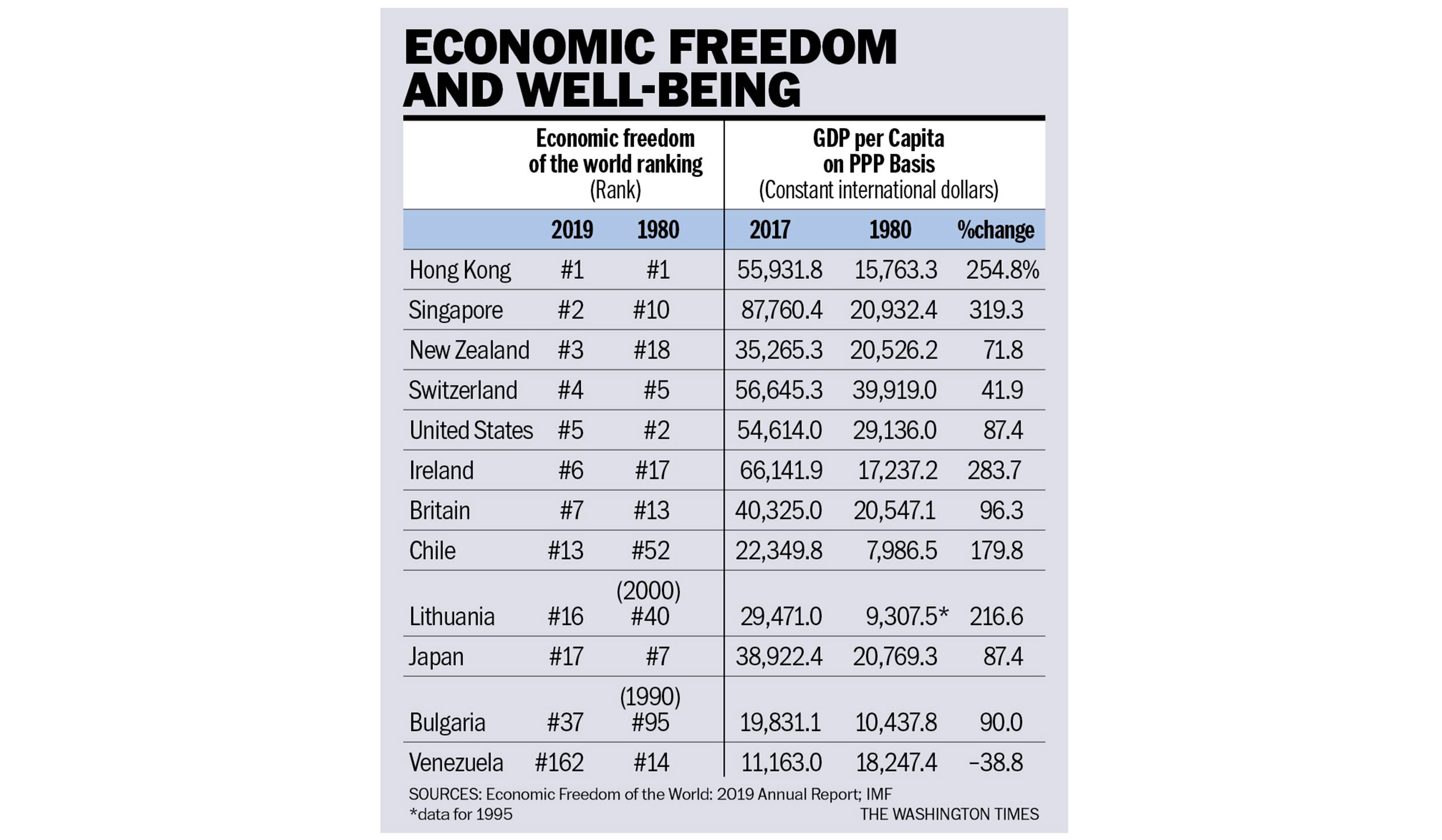 Socialism elevates the “collective” over the individual, which by definition requires destroying individual liberty. Under socialism, the individual is usually required to hand over (by force if necessary) an ever-increasing share of his or her work product to the state or its agents. Individual action, including speech and belief, is restricted anyplace it runs afoul of the state-sanctioned collectives.

“Democratic” socialism implies that the socialists can be voted out, as happened in Britain with election of Mrs. Thatcher in 1979, and in a number of the Scandinavian countries at the end of the last century. But that only happens where the existing institution of an independent judiciary is strong enough to resist the socialists’ attempts to monopolize everything and stop future free elections, as they have done in many places.

Outside of Western Europe, the institutions of a civil society often have not been strong enough to remain independent of socialist movements and leaders, and thus change has only come about through violence or economic collapse, as occurred in the communist block and many places in Latin America and Africa.

In the United States, the left has been working to undermine the necessary civil institutions for a successful society — including the courts, schools, churches and the free press. The current effort to impeach the president is another example of an attempt to undermine the Constitution.

Two articles of impeachment have been reported to the House. One is abuse of power. But without listing specific illegal activities, it is meaningless other than an expression that one does not like the president (being crude, crass and unlikeable is not an impeachable offense).

The Democrats were going to include bribery, but their definition was so expansive they had to drop it because congressional “horse trading” and “log rolling” would be included, as would most conditional foreign aid and other normal activities of those in government and elsewhere.

The United States has a “mutual legal assistance” treaty with Ukraine, so asking for information about apparent influence peddling was totally appropriate — political opponent or not. The other charge is obstructing Congress. Disputes between Congress and Executive are supposed to be settled by the courts as they have been for two centuries, not by impeachment. The Supreme Court (which is the appropriate institution, not the Congress) has just announced that it will decide how many tax and other records the president has to turn over — so the “obstruction” charge is now moot.

Technological progress tends to grind to a halt without the rule of law, due process, and other features and institutions of a free society. After the Constitutional Convention in 1787, Ben Franklin’s response to a question regarding what sort of government they created was “A Republic, if you can keep it.” Will we continue to pass the test?

• Richard W. Rahn is chairman of the Institute for Global Economic Growth and Improbable Success Production.