U.S. economy better than ever

In the United States, there are more jobs than workers

State Department lifts all restrictions on government contacts with Taiwan

Comrade. We hear you've been bad mouthing the party.

Should Trump pardon protesters arrested at the U.S. Capitol?

Economists call a general decline in prices, deflation and a general rise in prices, inflation. At any given time, some prices are falling and others are rising, depending on supply, demand and efficiency of production. Innovations come along, enabling people to get a better product or service for the same or lower price. Some innovations eliminate the need for some products, freeing up money to buy other things. Few people now buy typewriters or fax machines.

Medical advances are accelerating, with people not only surviving from many ailments that would have killed them a few years ago, but living relatively normal lives after serious cancers, heart operations and accidents. Recovering quicker and better after a medical problem is a cost reduction in the price of being ill. Serious medical scientists at leading schools now believe that we are likely to be able to reverse aging in as little as the next two decades — so hang on if you can.

Do an experiment. Pull out your iPhone/smartphone and look at all of the apps you use. Twenty years ago, if you had to buy each of the items or services represented by the apps, how much would you have had to spend? Now, most of them are free or very low cost. Yes, you had to buy the phone and the monthly carrier fees, but these costs are tiny compared to the amount of money you save every day by virtue of having the phone. How much would you have had to spend to get a camera as good as the ones in the new smartphones? The answer is that even the most expensive cameras of two decades ago did not have many of the capabilities of your phone camera. The same is true with most of the other apps. For a thousand dollars, you have a machine that would have cost hundreds of thousands, if not millions, to buy the capabilities in the recent past.

One of my colleagues is from Ukraine. She tells me when she first came to the United States 25 years ago, it cost her $2.50 a minute to call her family back in Ukraine. Now she can make that call for almost nothing.

Progress is in part measured by the number of hours a person needs to work to acquire a good or service. At the time of the American Revolution, most (85 percent or so) of the people worked on farms, which was necessary to feed themselves and the others. For the last several decades, the world has grown more food on less land each year, and mass starvations — unlike obesity — have ceased to be a real threat. There has been a miracle in agricultural productivity coming from farm machinery, seeds, fertilizers and better knowledge of how to grow things. So today approximately 1 percent of all workers grow enough food to feed everyone in the United States on less land than they used a century ago. (There are also many part-time hobby farmers who produce relatively little other than an attractive landscape — which is nice.)

The table below shows how little time you need to work, in contrast to 50 years ago, to buy the same stuff or much greater varieties of the same stuff. (In 1970, the average wage was $3.22/hour; today it is about $25/hour.) 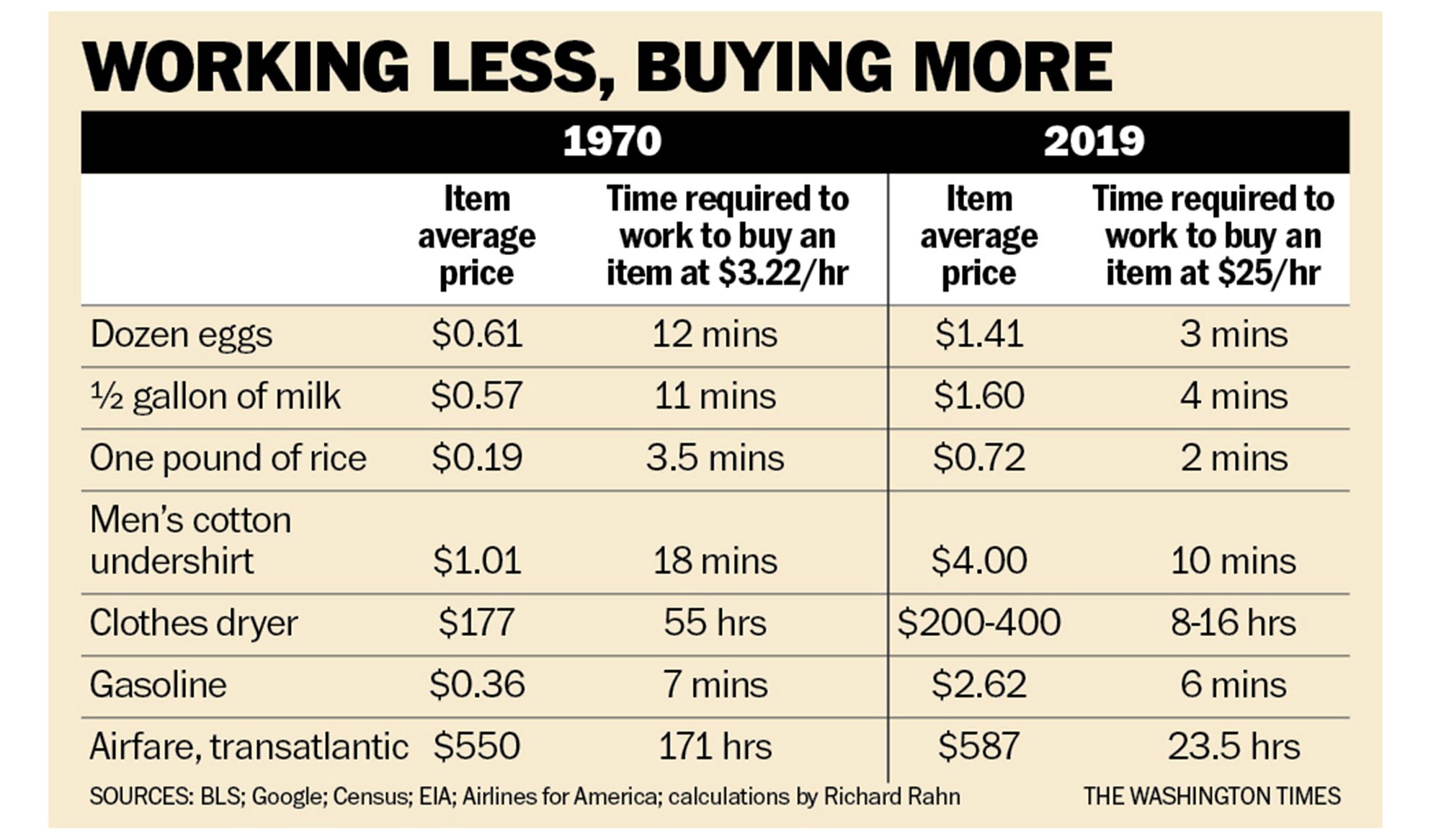 As the world becomes more efficient, it needs less physical stuff to do the same things. Irrigation and fertilizers are applied with more precision because of information technology, producing larger and better crops with less water and fertilizer. The computers in cellphones are far more powerful than computers that would fill an entire room a generation ago. Cars use less steel but are stronger and safer than they were 30 years ago. The real price of gasoline has not fallen by very much, but a much better car today can go more than twice as far on a gallon than it could decades ago — which is a transportation price decline.

The real wealth and well-being of the vast majority of Americans have risen faster for the past three years than almost any time in history. The grumpy old nay-sayers are obviously wrong — pay them no attention and count your blessings.

Shutting down Parler won’t stop domestic terrorism. But it could make it worse

Who does Chuck Schumer mean by ‘we?’

Why fake news is here to stay

What America faces with Biden and his Congress

How Democrats incite violence and insurrection by impeaching President Trump

Did Trump commit a crime by exhorting the crowds on Jan. 6?

Democrats’ vindictiveness against Trump will further divide the country