Post and liberal media again get it wrong about Trump economy

First, a full admission about this article. I originally sent a version of it to The Washington Post for publication, but for reasons that will become obvious as you read on, they rejected it.

Here’s the back story. Several weeks ago, I reported on the very large increase in median household incomes under Donald Trump. Based on Census Bureau monthly data, from January 2017, when President Trump entered office, through August 2019 middle-class household incomes had risen from $61,000 to an all-time high $66,000. These numbers are in 2019 dollars — that is, they are adjusted for inflation. Mr. Trump has repeatedly cited these numbers.

The left freaked out for understandable reasons. They are especially agitated because median household incomes have risen by $5,000 under Mr. Trump, compared to $1,100 in seven years under President Obama. (See chart.) The data also undermines the case against Mr. Trump — which as Elizabeth Warren likes to say in every speech: “the middle class has been left behind by Trump’s policies.” That’s flat out wrong.

The self-proclaimed “fact checkers” on the left went to work to try to discredit the numbers. This includes The Washington Post, PolitiFact and others. As an aside, we have a big problem in America when the “fact checkers” are all playing for the liberal team. A case in point is the liberal PolitiFact, which declared in a screaming headline: “Trump’s Shaky $5,000 Boast.” The Washington Post gave Mr. Trump two Pinochhio for claiming these income gains and said “Trump Inflates His Economic Record.”

A standard complaint is that these numbers are assembled by a private organization called Sentier Research. But the two Sentier statisticians who analyzed this monthly Census Current Population Survey data — the gold mine of economic information — are probably the most knowledgeable people in the country on this survey data.

The two of them worked on the income division of Census Bureau for a combined 40 years. They are scrupulously nonpartisan and no one has ever challenged their integrity. “We just report the data,” says Gordon Green of Sentier.

The Washington Post challenged the reliability of this data even though on numerous occasions The Post (and The New York Times) have cited Sentier’s research. So apparently, Sentier is reliable when it tells the Trump haters what they want to hear, and wholly unreliable when the data supports Mr. Trump. 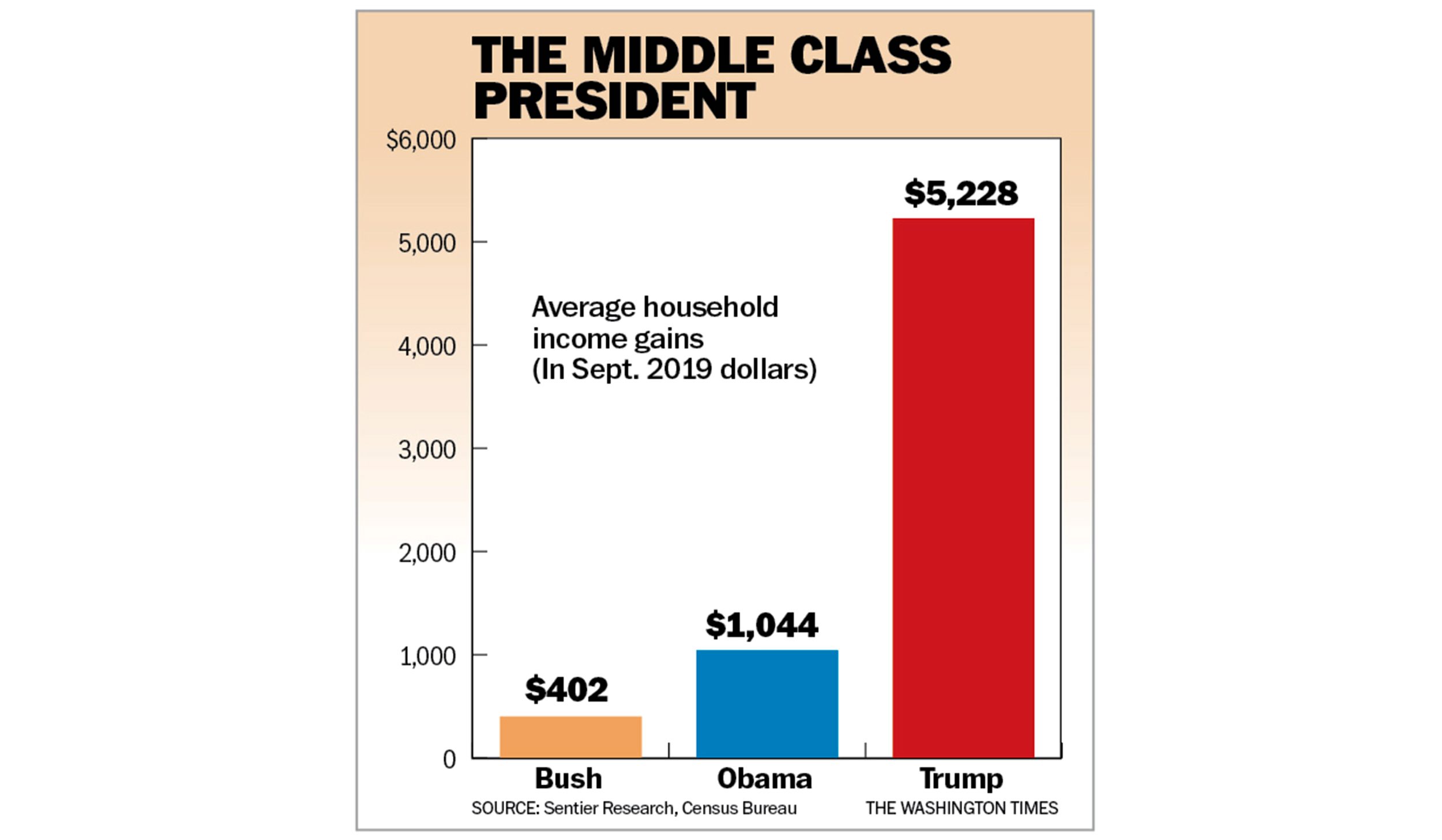 Admittedly, these monthly numbers are a first estimate of what is happening with incomes over time and up to the moment. They catch the trends over time. In the absence of this data, the latest income data is far lagged by at least a year and so this tells us with about 90 percent accuracy what is going on in real time.

Next, The Post complained that the income data needs to be adjusted for inflation. Actually, all the Sentier data is inflation-adjusted.

Next, they quoted Lou Jacobson of PolitiFact, who claimed that “even taking the expected 2019 statistics into account, the increase under Trump in the official data … should be smaller than the increase Sentier’s data shows.” Sorry, Lou, we already know this was a fumble in your own end zone. The latest data that has come out just last week shows the income numbers rising to $5,200, not falling.

Then, the skeptics whine that we shouldn’t compare Mr. Trump’s record with Mr. Obama’s because Mr. Obama inherited a deep recession. That’s true, of course, but incomes continued to plummet for two years after the Bush recession ended. Moreover, it was The Washington Post which editorialized before the 2016 election that a Trump presidency risked ruining the U.S. economy and causing a “global financial calamity.”

So it is more than a little hypocritical for The Post to now claim the Trump boom that they never saw coming is simply a continuation of the Obama recovery. Every fair-minded person knows that if the economy were in recession now, liberals would be shouting, “aha, Trump’s policies failed.”

Here’s one of my favorite ridiculous claims by The Post. In attacking Mr. Trump’s “rumbling distortions” on income gains, the reporter noted that the middle class isn’t doing that well because: “On an inflation-adjusted basis, Americans families are earning just 2.7% more (in 2016) than they did in 1999.”

But the flat family income between 1999 and 2016 is exactly what makes the Trump surge in incomes so impressive. Yes, it is true, incomes barely budged during the Bush and Obama years — up less than $1,200. Does Mr. Trump get the blame for that lousy record too?

If The Post and others in the liberal media really cared about middle-class families, they would be cheering these gains for scores of millions of households. But the left hates Mr. Trump, and so they feverishly root against the economy. It’s not that these facts aren’t true. It is that the left doesn’t want the good news to be true.

This is why The Post refused to allow me to correct the record. The grand irony of all of this is these are the people who assign Trump Pinochhio noses. But he isn’t the one guilty of rambling distortions.

• Stephen Moore, a columnist for The Washington Times, is a senior fellow at The Heritage Foundation and an economic consultant with Freedom Works.