LISTEN: An interview with Peter Bergen On the life and death of Osama bin Laden

What the presidential candidates are missing: economic growth

The 'progressive' message is grounded more in envy and give-aways

Quiz: Who are these movie villains?

While running for president in 1960, John F. Kennedy campaigned against the moderate growth economy (2.5 percent annual GDP rise) in the last years of the Eisenhower administration. He appealed to Americans’ highest aspirations by saying in his typical Boston drawl: “We can do bettah.” JFK promised 4 percent and 5 percent rates of annual economic progress for the nation — and he delivered.

Those were the days.

What a contrast to the proposals and rhetoric from today’s presidential candidates. I’ve watched many hours of Democratic presidential debates and have yet to hear an impassioned plea for faster growth. Many of the candidates — including Sens. Elizabeth Warren, Kamala Harris and Bernie Sanders — seem far more designed to reduce “inequality” or hand out free things to voters rather than expanding the economy.

The policy ideas would divide the pie differently, rather than expand the size of the pie for everyone. So much for the JFK idea of a “rising tide lifting all boats.”

The new economic message of progressivism is grounded more in envy and give-aways than prosperity and opportunity. Sometimes liberals seem so obsessed with income inequality they seem contemptuous of growth because it makes the rich, richer.

The Democratic national platform failed to even mention of the term “economic growth,” and don’t be surprised if that goal is absent from the 2020 party platform. Economic growth should be a universal and undisputed goal, regardless of political party or ideology.

This call for socking it to the rich may hold some political sway. Polls show higher taxes on the millionaires and billionaires is popular with voters. But is this any way to make Americans more prosperous?

It rarely works. Milton Friedman once famously warned that “any society that puts equality over freedom gets neither.” 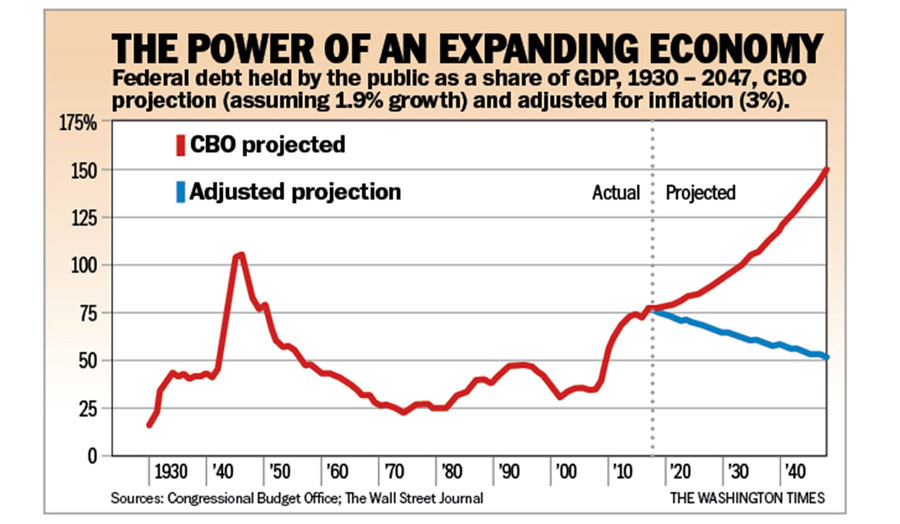 The green movement only reinforces the left’s retreat from growth because higher living standards are seen as an obstacle to environmental salvation. The latest darling of the left, 16-year-old climate change activist Greta Thunberg, gained worldwide applause when she told the United Nations that our obsession with growth is “destroying the planet” and leading to “mass extinction.” Evidently the cure to what ails the planet is fewer people, less consumption and an end to capitalism.

All of this is disturbingly misguided. In almost every way growth is critical to a better future for America. Faster growth of 3 percent to 4 percent makes solving so many other social and economic ills much easier — whether it is homelessness, lousy schools, unemployment, pollution, hunger, health care coverage, climate change or the national debt.

The attached figure shows, for example, how the U.S. national debt is expected to explode in the next three decades to 150 percent or even 200 percent of our annual economy. But with growth above 3 percent and not the 1.9 percent federal officials are forecasting, the debt not only stabilizes, it falls as a burden each year. With spending discipline, we can and will grow our way out of the debt crisis.

We see in the United States in recent years that higher growth rates are now leading to higher wages for middle class workers, very low unemployment, low interest rates for Americans who want to take out a mortgage to buy a home. The benefits of growth are widely distributed. High growth has corresponded with gains in middle-income household incomes and a 50 percent rise in the stock market — benefiting not just the rich, but the tens of millions of American families with retirement accounts and stock ownership.

Most surprisingly, is that economic growth is highly correlated with environmental improvement. My Heritage Foundation colleagues have found that citizens of nations that are rich and economically free have nearly 25-year-longer life expectancies than those living in nations that are poor with strict economic controls. The Heritage freedom index also shows that wealthy nations have much cleaner air and cleaner water than poor nations. Socialism is no way to stop pollution.

The Beatles sang that “money can’t buy me love,” and they were right. But it buys a lot of human improvement and makes life on Earth for the poorest people better. History proves it time and again. Someone please tell this to aspiring income-redistributor in chief, Elizabeth Warren.

• Stephen Moore, a columnist for The Washington Times, is an economic consultant with FreedomWorks and co-author of “Trumponomics: Inside the America First Plan to Revive Our Economy.”

Time for U.S. to unfriend Pakistan

Public pensions must divest from China

Biden vacations, while the world is on fire