LISTEN: An interview with Peter Bergen On the life and death of Osama bin Laden

Can the United States avoid a global recession?

Quiz: Who are these movie villains?

Is the world going into a recession? And if so, can the United States avoid being dragged in? Even though there are many who speak with great certainty as if they did know, the short and correct answer to both questions is no one knows.

The United States is still growing at more than 2 percent, which is not bad, but a reduction from its earlier growth rate after the Trump economic policies were first implemented. Despite Chinese claims that the world’s second-largest economy is still growing at approximately 6 percent, many outside experts believe it is hardly growing at all. Japan is nearly stagnant at 1 percent growth, and Britain and the Euro-zone economies are not growing much more. Only parts of South Asia, such as India, Malaysia and the Philippines, are showing much vigor.

The reasons for the slowdown in most countries is not difficult to understand. Too much government spending, coupled with destructive levels of taxation and regulation. The spending, in part, is being driven by very unfavorable demographics — in Japan, China and much of Europe, where the populations are already shrinking or soon will be. The people are living longer and longer, all of which results in fewer and fewer workers being taxed to support an ever-increasing elderly population. The more the workers are taxed to support the growing dependent population, the less likely they are to continue working (at least in the taxable economy).

Greece is the poster child for the future of Europe (as well as Japan and China), where the ability to borrow or tax has reached its limit, resulting in falling real incomes. Greece seems to have stabilized at the moment, but it will have to be very lucky to meet its new fiscal targets — and if it doesn’t, real incomes will continue to drop.

Artificial intelligence and robots may eventually come to the rescue, but probably not soon enough for most countries.

The Trump tariffs are being blamed for part of the global slowdown, and, to a limited extent, that is true. His argument that the tariffs are needed in the short run to obtain more “fairness” between countries has yet to be proved. The United States exports far less to China than it imports, so Chinese tariffs on U.S. goods are likely to be far less painful than U.S. tariffs on Chinese goods (which is a tax on U.S. consumers to the extent the Chinese refuse to absorb the tax). Trade with Mexico and Canada is more important, and so weak growth in those countries does have a measurable negative effect in the United States. The U.S. and Canadian economies are already highly integrated (look at the investment numbers), which makes Canada highly sensitive to what happens in the United States, but Canadian actions have a lesser effect in the United States.

There are several reasons why the United States should be able to avoid being dragged down into a global recession. The first is that the world operates on a U.S. dollar standard, which means that prices of most traded international commodities and many other products are quoted in dollars. A weakness in a foreign country most often results in the fall in the value of their currency relative to the dollar, benefiting U.S. consumers with lower-priced goods, and U.S. manufacturers with lower prices on imported components and materials. These lower prices offset the decline in demand among foreign buyers who are located in a country in or near a recession. 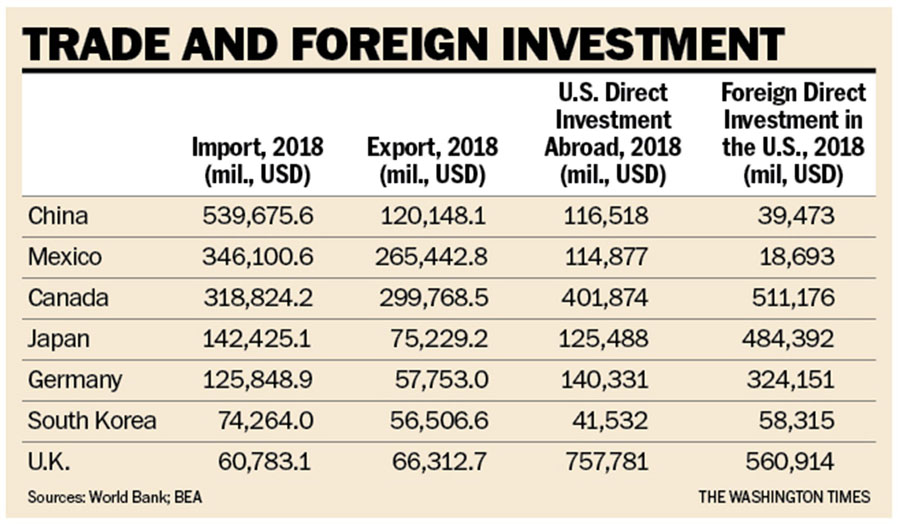 Finally, broad measures of the U.S. money supply show it growing at a slightly faster rate than last year, which would indicate a recession in the United States is highly unlikely in the next year or so.

The big surprise over the next year is likely to be China. The Hong Kong situation is very serious for which there is no obvious easy way out. The Chinese have tried to keep a free-market economy in production of goods, while at the same time have a very controlled economy in financial services and investment. In my judgment, that model is not sustainable. If they move toward a broader socialist economy, which they seem to be doing at the moment, they will end up with socialist stagnation. The only way out is a freer economy, which will increase the pressure for broader liberties.

And the last wild card is that if it looks as though Mr. Trump is going to lose to a socialist, U.S. investors will look for safe havens around the world, which could drive the economy into a serious recession.

Time for U.S. to unfriend Pakistan

Public pensions must divest from China

Biden vacations, while the world is on fire