One of Venice’s most majestic properties, the Ca’ Sagredo Hotel sits on the bend of the Grand Canal that divides Venice’s main islands, and offers the perfect place to begin a historical and culinary tour of the famed “City of Water.”

Located in the Cannaregio Sestiere, one of Venice’s seven neighborhoods and one of the city’s oldest inhabited centers, the hotel perfectly mixes Old World elegance and 21st century luxury within its neighborly confines.

Before becoming a hotel in 2016, the Ca’ Sagredo was a residence for 15th century nobles. The first owners, the Morosini family, sold the residence in 1661 to Nicolò Sagredo. It is said that Galileo went to the palace to visit with his friend, mathematician Giovanni Francesco Sagredo.

Walking into the enormous lobby, guests are greeted by friendly staff and two marble cherubs by sculptor Francesco Bertos. The youthful angels welcome visitors to climb the grand staircase to view the “Fall of the Giants.” Completed in 1734, the Rococo painting is the only existing fresco by Venetian artist Pietro Longhi (1701-1785).

The hotel’s other objets d’art and antiquities are equally eye-opening. Highlights include the music room featuring frescoes by Gaspare Diziani, the Murano glass chandeliers and the terrazzo floors adorned with the Sagredo family’s coat of arms. 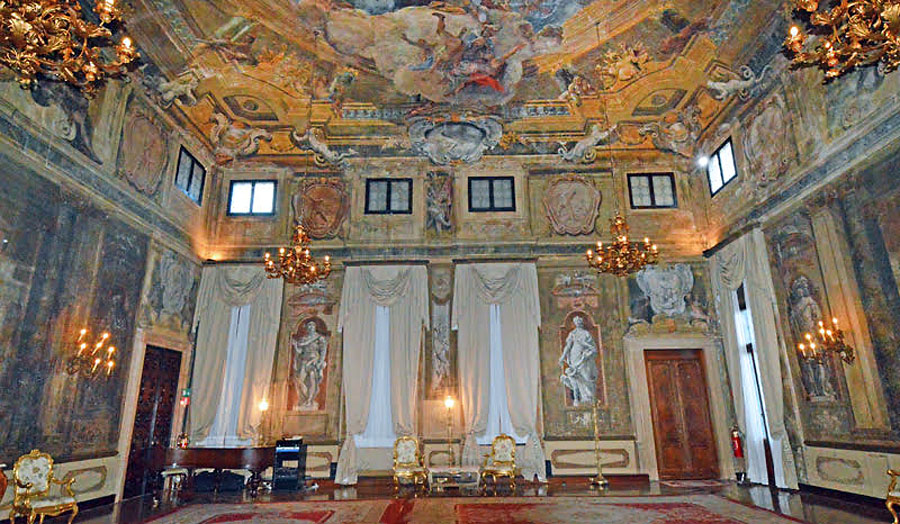 Visitors have many dining options along the Grand Canal while at the Ca’ Sagredo, which offers its own al fresco experience at its Zac Patio in Santa Sofia square. (It is open April through October.)

Chef Damiano Bassano, born in the southern Italian port town of Puglia, has returned to Italy after having worked in Paris, Strasbourg, the United States and Spain, where he spent time at Chef Ferran Adria’s erstwhile three-star Michelin restaurant in Catalonia.

The Grand Canal boasts a dinner menu rooted in traditional Venetian dishes with fresh fare from land and sea — and exceptional service, as expected.

Meanwhile, il risotto asparagi features carnaroli risotto with scallops and lemon — familiar but surprising in its creaminess, with the tart burst of lemon and sweet scallops shining through.

Meat courses include a rosemary beef fillet with cinnamon potatoes and green pepper hummus. The sweet fillet is perfectly accented with the tart green peppers and savory cinnamon.

Ca’ Sagredo not only has the Grand Canal at its front door but also sits across from the world-famous Rialto Fish Market and northwest of the Rialto Bridge.

Time your visit to catch the fishermen returning from Venice Laguna with their cries of “fresh fish!” to locals and restaurants. The neo-Gothic market is full of live eels, crabs, swordfish and brilliant pink-red tuna. 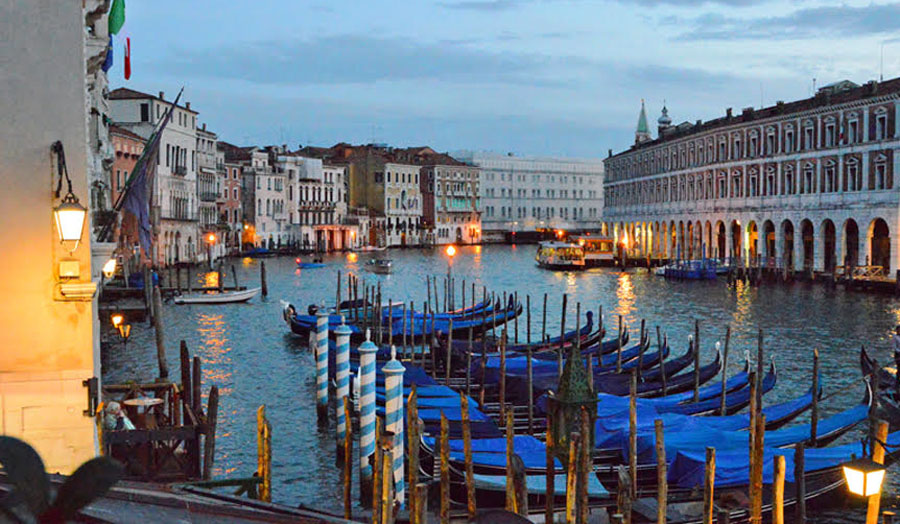 The Rialto is a perfect example of commerce in Venice, as it has been since its earliest days (1097). In Shakespeare’s “The Merchant of Venice,” Shylock opens the play with the questions “What news on the Rialto?” In her “Sonnets from the Portuguese,” Elizabeth Barrett Browning writes “the soul’s Rialto hath its merchandise.”

While browsing the stalls, look for glass beads — some from Murano, others in the Murano style. Venetian marbled papers, lace and linens are on display, waiting to go home as gifts and souvenirs.

The buildings in the area, however, date back only to the 16th century. A 1514 fire burned the Rialto down. Still, locals say that nothing has changed at this iconic marketplace, except for the awnings … and the addition of technology.

Call in advance to visit the Scuola Grande di San Giovanni Evangelista (1261), a building for charity work by lay brethren where visitors will find Gothic, Renaissance and Venetian baroque art and architecture. An 90-minute tour moves quickly through the building and includes the Campiello San Giovanni Evangelista, which consists of the remodeled 10th-century church and the Scuola Grande (or “great school”).

In 1454 the building was enriched with a lateral facade in Flamboyant, or late-Gothic, style.

Visiting any of Venice’s 139, primarily Catholic, churches is a treat, as they are repositories of Venetian Renaissance art, sculpture and architecture. Today only 88 of these structures still operate as churches. Some have become meeting places or repositories of the arts, providing venues for museums and concert-style performances.

Located in the heart of the San Polo district, the church is dedicated to the Assumption of Mary and is one of the largest basilicas in Venice. The Frari is one of Venice’s most sacred destinations.

Franciscans started building the Italian Gothic-style church in 1250 and took more than a century to complete the construction. The campanile, or bell tower, is the second tallest in the city, after San Marco’s.

Some items not to miss reside in the Dettagli Dell’opera chapel. On the altar one will find a triptych signed by Bartolomeo Vivarini of Mirena (1474). The center image is of St. Mark, offering a blessing while surrounded by angels. On the left side are St. John the Baptist and St. Jerome. On the right are Saint Nicholas and Saint Peter.

In the Frari sacristy of the Pesaro chapel stands a Giovanni Bellini painting in three, hinged parts with a center image that is grander than its wings. The colors of this piece are remarkable, from the deep blue of the Madonna’s robes to the alabaster skin of the Christ child, all beneath a golden barrel vault.

The artist has given this piece remarkable depth and clarity through details such as the marble veining and the angels that serenade the mother and child. The figures in the side panels are given depth through the use of slivers of a landscape that place the imagery in a dimensional place.

The San Polo sestiere is full of great churches, art and history, all just steps away from the Ca’ Sagredo Hotel — itself a destination for grandeur.

⦁ Visit Venipedia. orgto review a list of churches and their locations.
⦁ Take change. Many churches ask for a donation, if not an admission fee. Cash on hand helps.
⦁ Be respectful in tone and tenor. Dress modestly. Bare shoulders (men or women), short shorts (men or women) or revealing clothing is not allowed. If you must wear that shoulderless sundress, carry a large scarf that you can wrap around your shoulders or cover any décolletage.