NEW TODAY: From Mussolini to Meloni Explaining the return of right-wing populism in Italy

GOP candidates need to focus on the economy, inflation and the border crisis

Who is going to support you in your old age?  Most Americans rely heavily on Social Security benefits – but will the benefits be available when you retire?  Before the pandemic, the outlook was already bleak, but the policy responses to the pandemic have made things much worse for current and future retirees.

Politicians love to talk about the Social Security “trust fund” and assure us that it will not be raided.  But the unfortunate fact is the “trust fund” is an accounting fiction without any real assets. In actuality, Social Security is a giant Ponzi scheme operated by the government. Benefits that are paid to existing retirees come from the current taxes from those working today and borrowing. There is no reserve pool.

The country would have to breed rapidly (lots of kids) for it to work, and the retirees would need to die early.  But now, Americans have fewer children, and life expectancies are growing rapidly.

Social Security Act was signed into law in 1935, and the first payments were made in 1940.  At that time, there were 160 workers for each person receiving social security payments.  In 1950, the number of workers was down to 16.5 for each recipient – which was very manageable.  The ratio continued to fall so that by 1980, there were only 3.2 workers for each recipient – an unsustainable situation.

President Ronald Reagan appointed Alan Greenspan to head a commission to look into and advise on the situation. That commission, along with the previously Congressionally mandated 1982 quadrennial Social Security Advisory Council (on which I served as a Reagan appointee), made a series of recommendations for improving the fiscal soundness of both the old-age pension and Medicare portions of Social Security. Some, but not all, of our recommendations were adopted by Congress and the Administration, which stabilized the situation until the Great Recession in 2008-2009.

In addition to the program policy changes — the Reagan boom, due to the tax rate cuts and deregulation, lasted for two decades with only one small interruption by a mild and short recession in 1990.  The other major positive force was the rise in the female labor force participation rate from roughly 1970 to 2000.  Women added tens of millions of new workers and social security taxpayers to the labor force. That one-time labor force demographic shift is now over, and as a result, the ratio of workers to beneficiaries is falling once again.

There is no easy way out.  Future Social Security benefits will be cut (probably by not fully indexing for inflation), and/or taxes will be greatly and continuously increased until the system collapses. 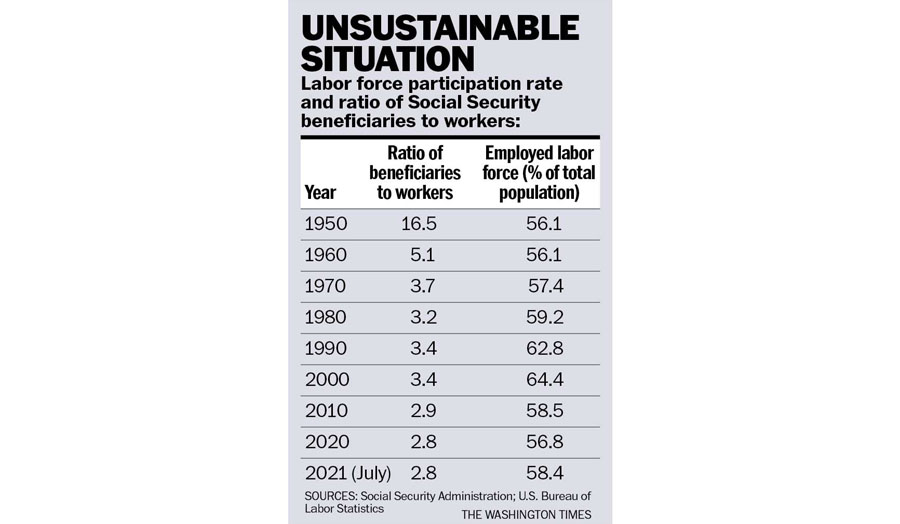 Despite an excellent July employment report, Congress and the Biden Administration have made the situation much worse by providing too much in the way of unemployment benefits.  If the government is willing to pay you as much money – after taxes – by not working as working, what are you going to do?

There are now nine million unclaimed jobs.  This past month, I was on a road trip through the mountain states, and in every town, hotels, restaurants, and other service establishments were begging for workers.  Because of the government-induced labor shortage, these enterprises were unable to operate at full capacity – which was inconvenient for potential customers and a real hardship for the merchants.

Even when the excess unemployment benefits are reduced, it now appears that many will choose not to re-enter the workforce, resulting in a lower future GDP, less economic well-being, and lower real retirement and welfare benefits.  Over the long run, this is national economic suicide.

The world has seen this play before.  In 1906, Argentina on a per-capita income basis was one of the richest countries in the world, rivaling the United States.  It has bountiful agricultural and mineral resources and had a relatively well-educated population of mainly European origin.  But after a century of fascist/socialist/welfare-state governments, it is now a poor country.

Venezuela went from a rich country with civil liberties to a poor oppressed country in only two decades.  As Margaret Thatcher famously said, “the problem with socialism is that eventually, you run out of other peoples’ money.”  The Greeks built a nice welfare state, largely using German taxpayers’ money – the Euro – until the Germans said, “no more.”  As a result, the Greeks have seen a drop in real incomes of more than 30 percent in seven or so years.

It gets worse. American socialists and environmental extremists have become anti-child. Like AOC and her allies, some argue it is morally wrong to have children in a “racist and environmentally unsustainable world.”  (Note – you do not see them offering to die early – that is for others.)  Families with children are the bedrock of the future.  Who will pay all of the old-age pensions and create the innovations to make the environment cleaner – whining, self-absorbed and self-pitying, unmarried, childless individuals in Manhattan and San Francisco or the kids with loving supportive parents in most of America?