NEW: The problem with prohibitions What the temperance crusade tells us about post-Roe America

Time to dissolve the FBI

Al-Zawahiri’s death should be celebrated, but big questions remain

The semi-autobiographical film, built from Mr. Crowe‘s Academy Award-winning screenplay and set in the 1970s, offers a coming-of-age tale about the tenacious William Miller (Patrick Fugit), a 15-year-old aspiring rock journalist given the chance to go on the road with the band Stillwater for “Rolling Stone” magazine and fulfill his dream life.

Over the course of his wild adventures, the young and naïve William grows up quickly while learning about the hard and excessive life of musicians while befriending members of the band such as lead guitarist Russell Hammond (Billy Crudup), singer Jefe Bebe (Jason Lee) and the famed band-aids, i.e., groupies led by Penny Lane (Kate Hudson).

The lead performances by Mr. Fugit and Miss Hudson are especially poignant and amply supported by Francis McDormand as William’s strict mother Elaine, Philip Seymour Hoffman as his mentor and editor of “Creem” magazine Lester Banks and Anna Paquin as band-aid Polexia Aphrodesia.

Equally important is the film’s soundtrack that features tunes from legendary bands and artists such as Led Zeppelin, The Who, Deep Purple, The Stooges, Black Sabbath, The Allman Brothers Band, Cat Stevens and Elton John.

Suffice it to report, this love letter to one of the greatest decades of rock music comes loaded with heart. It will capture the imagination of those that remember a time period when music meant everything to its listeners.

Paramount offers viewers both cuts of the film, the theatrical version and the extended cut of the film, dubbed the Bootleg Cut, that offers an additional 40 minutes of depth.

4K in action: Both cuts of the film are given the 2160p upgrade with high dynamic range enhancements remastered from a new 4K transfer and supervised by Mr. Crowe to deliver easily the best-looking presentations of “Almost Famous” ever released to home theaters.

Fans will, of course, show off to newbies that extended cut and appreciate moments such as a hazy red sunrise as the band enters Topeka; the New York City skyline; the beat-up worn leather on the tour bus seats; the intricate designs and earthy tones of those paisley-powered, long-sleeved shirts; and the crisp reality of Penny’s pure, immaculate facial skin tones and golden curly locks.

The presentation pays homage to John Toll’s vintage cinematographic style and is respectful of the original source while offering just a hint of film grain and a glint of occasional golden haze acting like viewers are watching memories of the participants. 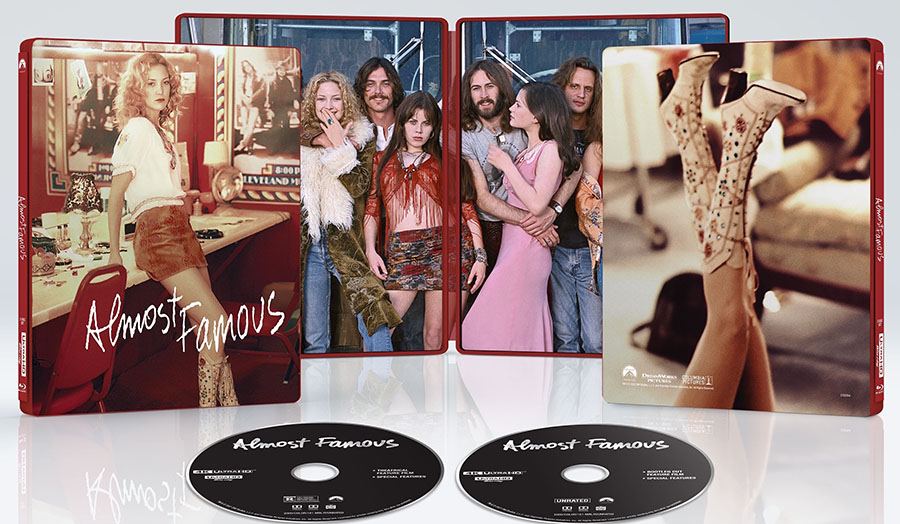 Best extras: Paramount, with help from Mr. Crowe, offers a bountiful digital backstage pass of bonus content on the two-disc set, both new and culled from the 2011 Blu-ray release.

First, look to the Bootleg 4K disc for a previously released optional commentary track that is as entertaining as informative.

That’s right, mom is available and not afraid to talk about the Crowe family, richly adding to the director discussing growing up and his real life as a teenage “Rolling Stone” correspondent. Yes, we also learn about the production of the film, but mom and son have plenty of nostalgia to offer.

Now pop in the theatrical cut, 4K disc to first find a brand new, eight-minute Filmmaker Focus with Mr. Crowe as he offers reflections on the classic, the importance of shooting the movie in chronological order, critical camera location on the bus, and plenty of raw footage and still imagery to enjoy as well.

Add another 11 minutes of raw footage of the actors practicing to become a band with help from Peter Frampton and Nancy Wilson, both offering extra commentary along with the band of actors.

The vintage extras include a 24-minute featurette on the production, the full Stillwater concert, the famous “Stairway to Heaven” deleted scene and a collection of interactives.

Viewers can click on a section title and further click on various hotspots to learn about the directors’ top 10 albums in 1973 including The Who’s “Odds and Sods” and Led Zeppelin’s “Houses of the Holy,” read the actual film script and even read seven of his articles that were published in “Rolling Stone.”

Mr. Crowe also offers commentary on many of these vintage extras, just click on the microphone next to the feature’s title.

The discs arrive in a photo-illustrated steelbook case with the cover featuring a sepia tone, matte image of Penny leaning against a table with the film’s title on the lower half, and the back cover displays a shot of her booted legs. The inside has a full-color cast photo.