LISTEN: Paging General Washington Opposition to vaccination is as old as vaccines

Taxpayers to foot bill for amnesty under House proposal

What’s legal, what’s not under the new Texas abortion law

Quiz: Can you name the actors who played these 1980s TV characters?

Still going after the bad guys: 20 years after 9/11, U.S. tallies wins, losses in war on terror

Broken down on memory lane

Do you believe that students and others should be taught to judge people on the basis of their skin color? The “critical race theory” crowd argues that many of the ills affecting society come from the notion of White privilege, and that Whites — even small children — must be punished for the alleged sins of their ancestors, even if they never held slaves or treated Blacks poorly.

Discrimination on the basis of skin color, race or ethnicity has been illegal in the U.S. for more than a half century, and most Americans of all races are not bigots. Businesspeople who hire employees or serve customers on the basis of race or sex, rather than competency, put themselves at a competitive disadvantage and, ultimately, are forced to change their policies or go out of business — without being ordered to by government officials.

When engaged in policy debates, it is good to look at the facts and the data to the extent that it exists. Fortunately, the United States Census Bureau has compiled very detailed data on the incomes of Americans by race, ethnic origin, sex, marital status, religion, etc. The data in the accompanying chart comes from the Bureau’s 2018 “American Community Survey” (the latest available). (Note:  Because the data is so extensive, I have just taken a sample — which includes sub-sets of the White, Asian, and African American categories — for the purposes of this article. The entire data bank is available online for those who wish to have a more detailed look.) 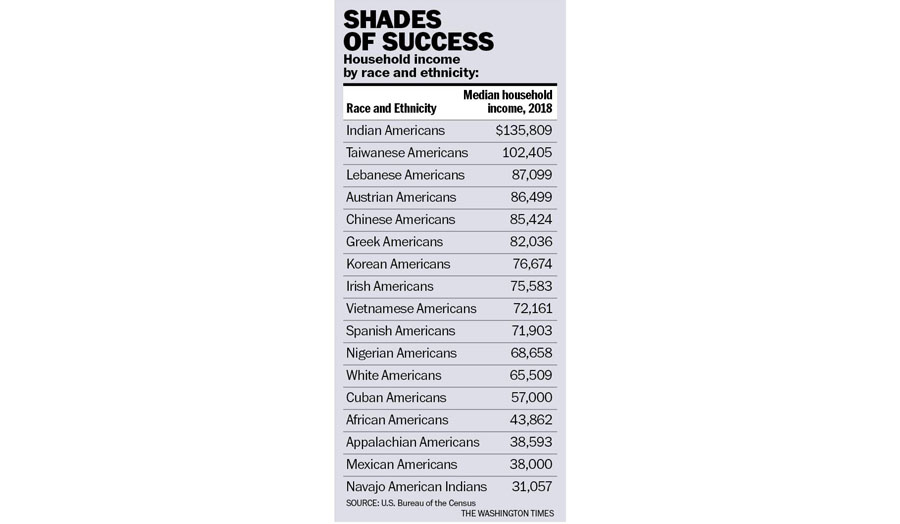 The term Hispanic covers those White Europeans of pure Spanish origin to the typical brown-skinned Central American whose ancestors were more often American Indian than Spanish. The term explains a language group, not a genetic or income group.

Most American Blacks were descended from West African tribes, including what is now Nigeria. The Census Bureau differentiates those of African American ancestry whose forbearers came as slaves in contrast to those who came of their own free will in recent decades and who now have a higher average income than White Americans. Why is that?

Before the Civil War, White Americans were able to obtain wealth by obtaining free land provided they “worked it” for a few years and from skills that they obtained through education. Slaves could neither acquire land or education (in some states it was illegal to teach them to read and write). Their big disadvantage was not in their skin color but in the fact that, unlike most other Americans, they had fewer ways of acquiring property and education.

If you really want to help those groups who are lagging, find ways (and there are many) of enabling them to obtain secure property rights to productive assets and provide them with marketable skill sets — math, science, information theory, etc. — but not counterproductive education in “grievance studies” (e.g., sociology, Black and women’s studies, etc.) that actually reduces their chances of obtaining well-paying jobs.

The Afghanistan failure should not deter a strong foreign policy

How sex trafficking funds the Taliban and terrorism

U.S. Constitution is not just words

Unborn child: A work of art with certain inalienable rights

Congress reinstalls a wall to keep out ‘the people’

Public schools are worse than you think

Biden has made the world’s deadliest terrorists great again