Quiz: Can you pass a basic planet Earth science test?

‘Must be fulfilled’: Xi Jinping calls for Taiwan annexation as tensions rise

No, Romans 13 does not say Americans must submit to Joe Biden

Would you support a mandatory COVID-19 vaccination for illegal immigrants and other non-citizens in the United States?

If a person goes to the hospital in great pain and if the admitting physician misdiagnoses the problem as a heart attack when, in fact, the person is suffering from an acute intestinal blockage, the doctor and hospital are guilty of malpractice if the patient suffers from the faulty diagnosis and improper treatment. Medical malpractice normally affects only one patient at a time. Economic malpractice occurs when policies are put in place that has been demonstrated, time and time again, to increase the stock of misery for millions rather than to make their lives better.

This past Friday, the government published the employment numbers for September. The number employed only grew by 194,000, less than half of what was expected, while the unemployment rate fell 0.4 percentage points to 4.8 percent, primarily due to people leaving the workforce. There are a total of 7.7 million unemployed persons, while there are 10.9 million unfilled job openings – that is, there are more jobs available than there are workers to fill them.

President Biden and most of the Congressional Democrats claim that the cure for the lack of job growth and the sluggish economy would be for the government to spend something in the order of another $ 3.5 to 5.5 trillion. This is nothing short of economic malpractice and will lead to stagflation at best.

During the Great Depression of the 1930s, a noted economist, John Maynard Keynes, argued that the high double-digit rate of unemployment at the time was caused by insufficient demand for goods and services, and his solution was for the government to give people money to spend, thus creating more employment. Many other economists disagreed with Keynes’ analysis and prescription. Still, it appealed to the political class because it gave them a rationale to increase government spending without raising taxes by an equal amount.

In the more than eighty years since Keynes presented his “General Theory,” politicians the world over have used his ideas as the excuse to engage in more deficit spending at the first sign of any “excess” unemployment. Keynes, who died in 1946, would probably be mortified at the corruption of his proposals. The point has now been reached where the Biden Administration is bragging about reaching near full employment while at the same time advocating record deficit spending.

For anyone who has gone to a supermarket, gas station, home improvement store, restaurant, etc., in the last few months, it should be evident that the problem is not a lack of demand (or the shelves would not be empty) but a lack of supply. Increasing demand through more government spending will only make the problem worse. More government spending will do nothing to grow more crops, increase port capacity, or create more manufactured products and services.

Think of an oil well that produces 100 barrels of oil a day. Increasing the amount of money you give to car owners from a government payment while at the same time restricting the ability of the oil production company to drill more and ship more (no pipelines) will only result in higher gasoline prices. Car owners will be no better off (but, in fact, worse off when the government bureaucrats and politicians take their cut). The only thing produced by such government actions is inflation.

If each year a family spends more than it receives in income and borrows to make up the difference, it will pay more and more in interest. If the increase in income it earns each year grows faster than the increase in interest payments, no problem, but if interest rises faster than income, eventually there will be a day of reckoning – bankruptcy. The same is true with governments. Suppose interest payments on the debt rise faster than the increase in tax revenues. In that case, the government debt holders will eventually find that the value of their bonds is destroyed by inflation or outright repudiation. As a rough rule of thumb, governments can handle debt burdens of less than 100% of GDP; but once debt burdens rise above that, the situation often spirals out of control. Several U.S. cities have gone bankrupt over the last couple of decades, leaving the bondholders with little. 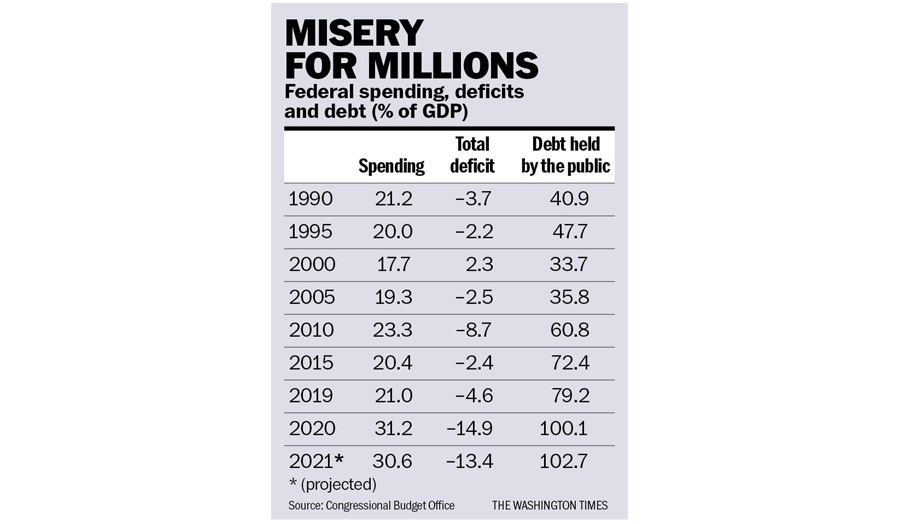 As can be seen in the accompanying table, the U.S. government is now approaching a point where the only way out will be much higher inflation. (Please note that it is unlikely the U.S. will engage in direct default on its bonds given that it is the world’s reserve currency and can print an almost unlimited amount of money – but with less and less value.)

Mr. Biden and his economic team, led by Treasury Secretary Janet Yellen, propose increasing the government’s size. Many studies indicate that the current size of the U.S. government is well above optimum, so increasing spending will only make things worse – mainly when the problem is one of insufficient supply, not demand. Mr. Biden has no background in economics and has shown little interest in it during his fifty years of public life. To avoid committing malpractice, he is duty-bound to staff his administration with knowledgeable and competent people. We are still waiting!

No, Romans 13 does not say Americans must submit to Joe Biden

Our children’s children will pay for Democrats’ fiscal irresponsibility

How I learned to stop worrying and love CO2

Could Biden have screwed more things up in just 10 months?