Get with The Times: Subscribe now and save up to 77%

Are you ready for the ‘tyranny of the minority?’ An interview with Sean Wilentz

Biden cancels oil while Americans suffer and the world laughs

How should the United States approach the 2022 Winter Olympics in Beijing?

The esteemed director had quickly left his mark in sci-fi cinema with “Alien” and “Blade Runner,” but his attempt to further capture an audience’s imagination with a lavish adult fairytale did not fare quite as well.

Panned by critics and twinned with an anemic box office, the film starred a young Tom Cruise as Jack, a powerful protector of the forest tasked with saving his beloved princess Lili (a pre “Ferris Bueller” Mia Sara in her first film) and stopping the Lord of Darkness (Tim Curry) and his goblins from killing unicorns and using their horns to unleash an eternal night upon the world.

Jack teams up with a team of elves, fairies, pixies and sprites to infiltrate the bowels of the wicked great tree of life for a final confrontation with the devilish Lord.

The lofty somewhat Tolkien, Shakespeare and Walt Disneyesque-influenced story plucks themes from “The Lord of the Rings,” “The Once and Future King,” “Peter Pan” and “A Midsummer Night’s Dream” as it weaves a plodding tale of magic and romance.

The movie certainly had the boyish Mr. Cruise looking out of place, especially when sparkling in glitter and dressed in some strange gold armor, as he was practically swallowed up by the extravagant set design and overshadowed by the Dark Crystal-looking evil minions.

However, Mr. Curry delivers a nearly career-topping performance, despite only minutes of actual acting, while covered in prosthetics to resemble a terrifying red-horned and hooved devil.

Moments as pretty as a Hildebrandt Brothers painting include a pair of unicorns playing in a stream covered with multicolored flowers on either side, Lili running through the forest during a snowstorm and Jack’s swampy encounter with the monstrous hag Meg Mucklebones (“Star Trek’s” Robert Picardo).

Viewers get two cuts of the film, each on a separate Blu-ray disc.

First the theatrical version clocks in at only 89 minutes but arrives in a new 2K restoration from a 4K scan of the original camera negative. The work pays off as the visual clarity and color depth pop from the screen. It also offers a score by the 1980s pop synth band Tangerine Dream.

Next, the preferred director’s cut offers a 114-minute version of the movie and was culled from the 2011, Ultimate Edition Blu-ray release that reconstructed the film from a less than perfect “answer cut.” It still looks sharp and colorful but not as strong as the new theatrical scan but adds an orchestral score by Jerry Goldsmith.

Ultimately some will find “Legend” a guilty pleasure, others a cult classic but no matter, all will appreciate the outrageous production design, the dreamy “Excalibur” cinematography and creepy creature effects. 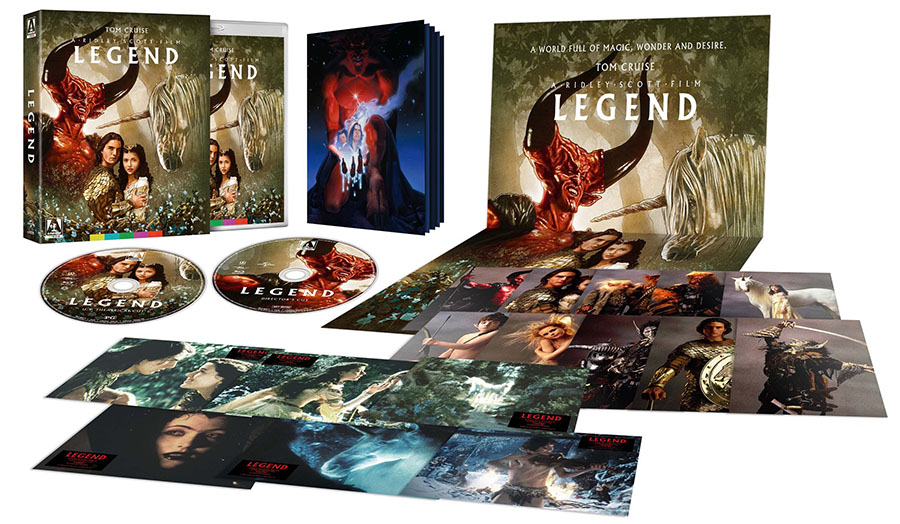 Best extras: The limited edition release completely pampers hardcore fans with an abundance of both digital and hard copy goodies.

First, viewers can listen to not only the director deconstruct his film but listen to a new optional commentary track from the author of “Ridley Scott: The Making of His Movies,” Paul M. Sammon.

Obviously, Mr. Scott’s takes precedence, and his no-nonsense optional track comes from the 2011 Blu-ray, over the director’s cut, and offers a thorough and candid dive into the minutiae of creating “Legend.”

Mr. Sammon also does not disappoint, appreciating a film that he believes mixes Judeo-Christian mythology and darker European fairytales. He talks near nonstop and delivers more of a critical tone of the creative decisions mixed with a guided, behind-the-scenes tour of the film’s production, its versions and origins.

Now strap in for some great featurettes.

Start with a new 30-minute retrospective that takes viewers down memory lane with crew and cast, including production supervisor Hugh Harlow; camera grip David Cadwalladr; costume designer Charles Knode; co-star Annabelle Lanyon (the fairy Oona); camera operator Peter MacDonald; set decorator Ann Mollo; and artist John Ralph as they reflect on how much they enjoyed working with Mr. Ridley and cover most aspects of the movie.

Next, and my favorite, is a 26-minute, two-part look at the creature effects. It starts with illustrator Martin A. Cline discussing the key fantasy character origins shown through initial sketches and illustrations in a segment packed with artwork.

Part two has the lead make-up artist of “Legend” Nick Dudman discussing the practical application of the Rob Bottin’s creature designs, realized by the facial and appendage prosthetics and costuming.

He focuses mainly on Mr. Curry as the Lord of Darkness (initially an eight-hour process to apply the make-up), but also touches on the dancing statue, the difficulty in putting horns on the horses and Mr. Picardo’s ordeal as Mucklebones.

The packaging arrives as a cardboard case with a wraparound cover featuring new artwork by Neil Davies.

The contents of the box offers a 60-page, full-color illustrated book with “Legend” essays by Nicholas Clement, Kat Ellinger and Simon Ward; a vintage piece on the movie’s story from the screenwriter William Hjortsberg; production notes; and a 2002 interview with Charles de Lauzirika about the restoration of the director’s cut.

Also, the reversible sleeve for the clamshell case holding the pair of Blu-ray discs features the artwork by Mr. Davies and Mr. Alvin.