The Rebellion Podcast Everett Piper: Thank God for the church

Inflation, coupled with Dems’ proposed tax increases are a recipe for disaster

If you thought President Joe Biden’s foreign policy and Afghan withdrawal were disasters, wait until you see the tax increase details of what the congressional Democrats and the Biden administration are now preparing.

Almost all banks now pay interest at one-half of 1% or less on savings accounts. Consumer prices are now rising at more than 4% annually, and producer prices are rising at more than 8% for the 12 months ended in August. Remember: Inflation is caused by government policy incompetence. If your savings account was worth $100,000 a year ago, it now only has the purchasing power of about $96,000, including the interest you received on it. If you were lucky, the interest you received might have been $500. In real terms, you had a $4,000 loss, but the government will claim you have a $500 gain upon which you owe income tax. If a private person pulled such a scam, they would likely go to jail for good reason.

Many countries, like Switzerland, do not have capital gains taxes because they understand that capital gains taxes destroy productive capital, tax gains are largely due to inflation, and the tax provides no long-term real revenue. Most countries do not tax gains on commodity or cryptocurrency trades because, unlike those in Washington, they understand it is a zero-sum gain (real gains and losses balance out over the long run). The enforcement required would not meet a cost-benefit test and impinges on the basic right to privacy. 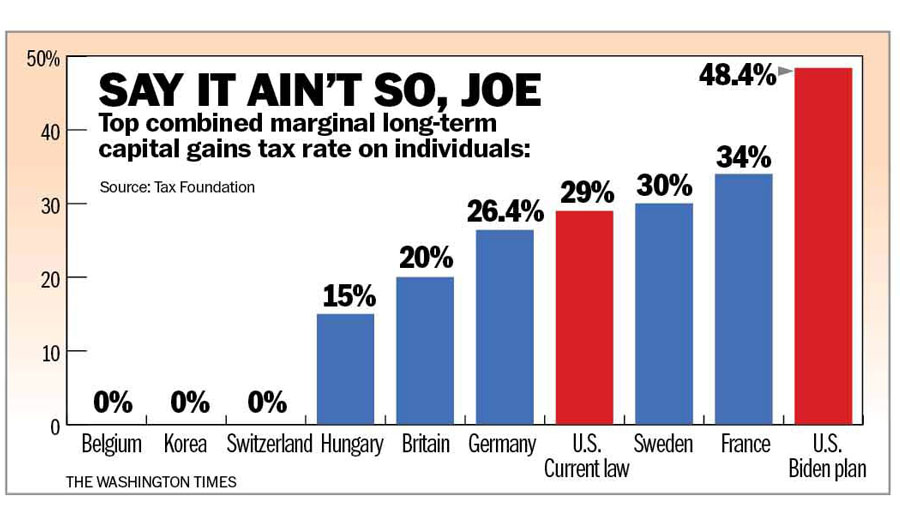 High inflation rates make the capital gains tax even more deadly and destructive. Many government bureaucrats and other parasites who inhabit Washington have little idea of what it takes to run a successful small business, including farms. Today, farming is very capital intensive. The massive and costly machines indispensable to running a profitable farm or small business with low margins require economies of scale (i.e., no one survives on 40 acres and a mule). The politicians tell us they will exempt the “small family farm” from the tax increases.  The fact is 78% of our food is produced by fewer than 500,000 farmers. Many of the other farms are part-time operations and hobby farms, like small wineries.  Farming and most small or medium-sized businesses are very risky – floods, droughts, conflicts between nations, irrational government regulations and taxes, and changes in technology are all tough to predict. To have a good income – a senator’s salary – from a business that only returns 5% on capital will require a four-million-dollar investment.

Thousands of people, particularly in the Southeast, own small timber operations. People who do not have jobs with big companies or government agencies that have generous pension programs frequently buy woodland with the idea of harvesting the timber (a 35 to 50-year crop) or selling the land when they retire.  All those years, they paid the taxes, protected the trees from insects and fire, thinned the forest, etc. The timber land may appreciate at an average of 2% per year over 35 years, doubling in nominal value; but if inflation averages 3% or 4% or more, the real value goes down, and then the government levies a big capital gains tax on the sale – because in the year of the sale, the owner appears to be rich, even though they may have had a modest income for each of the 35 years.

The folks in government have engaged in theft of property – little different from someone stealing your car. The U.S. does not have a wealth tax because it is unconstitutional, and such taxes are very destructive when applied elsewhere. Inflation (again caused by bad government policy) has the same effect as a wealth tax.  It discourages productive investment, misallocates capital, and thereby reduces real incomes and job creation. As the U.S. so well learned during the Carter administration, inflation coupled with high capital gains tax rates is a formula for stagnation or worse. The Biden folks seem to be hellbent on doubling down well–discredited policies out of ignorance of history or stupidity.

Youngkin is bringing the heat in VA gubernatorial race

The soft bigotry of liberal election litigators will backfire

The Minsk Group and the failure of multilateral mediation

Nancy Pelosi aligns herself with the Satanic Temple

Questions for Milley and Austin about Afghanistan