President Biden is on track to expand the size and authority of the federal government to levels unseen since the height of the Obama administration.

Mr. Biden entered office with more than 11 million people employed by the federal government in some capacity, according to the liberal Brookings Institution. At the time, there were 2.2 million full-time employees, 1.4 million military personnel, roughly 500,000 Postal Service workers, 5 million government contractors and 1.8 million people whose salaries were derived from federal grants.

“The total number of actual federal employees generally has stayed stable for decades, but the big additions usually happen outside the margins,” said David Ditch, a budget analyst at The Heritage Foundation. “When you’re pumping more money into the economy and giving out government contracts or grants, you’re essentially adding to the federal workforce.”

Mr. Biden’s Inflation Reduction Act alone set aside $80 billion for the IRS to bolster its technology and workforce over the next decade. An official in the Transportation Department told The Washington Times that the infrastructure measure was expected to add as many as 700,000 jobs per year — most of them in manufacturing and construction.

Outside of government contractors and grant recipients, the Congressional Research Service estimates that Mr. Biden has added 82,000 civilian employees to the executive branch between full-time and part-time workers. Meanwhile, the research agency estimates that the U.S. Postal Service has shed more than 6,200 employees and the U.S. military has lost more than 22,000 uniformed personnel. 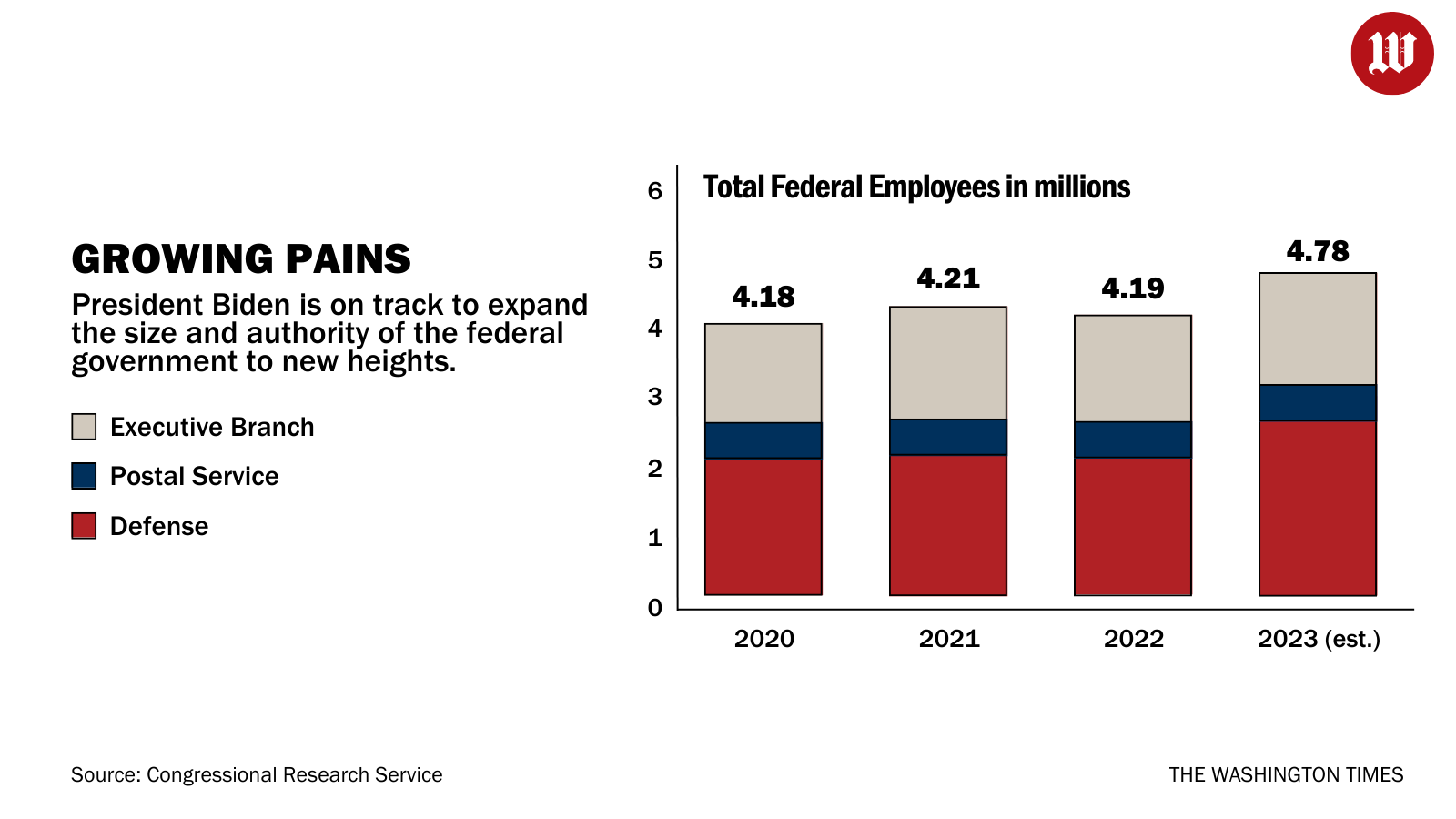 Some Republicans say the expansion of the federal government’s reach is part of a liberal push for greater influence over virtually all aspects of life.

“The Biden administration believes it should be able to control every decision you make,” said Rep. Gary Palmer, Alabama Republican.

Mr. Biden’s additions are expected to inflate the federal government’s size to levels unseen since Barack Obama occupied the Oval Office. In 2010, after the Great Recession, Mr. Obama’s stimulus spending employed nearly 12 million individuals in the federal government in some capacity. More than 7 million were contractors or people employed through government grants.

Apart from bolstering the number of federal bureaucrats, Mr. Biden has empowered government workers to play larger roles in pushing his agenda. On climate change alone, Mr. Biden has instructed every federal agency and department to make reducing carbon emissions a priority.

“The directive has ensured that every agency and department has to look for ways to combat climate change,” Mr. Ditch said. “All of a sudden, someone in charge of federal procurement has to take climate change into account when figuring out what to buy.”

Republicans, who won control of the House in the midterm elections, are pledging to use their majority to rein in Mr. Biden’s bureaucrats. They have already approved legislation to gut the $80 billion in additional funding for the IRS, although the bill is unlikely to pass in the Democratic-majority Senate.

House Republicans also promise to balance the federal budget over the next decade by keeping spending flat, even if it means bringing the U.S. to the brink of defaulting on its debt.

“I would never think that President Biden would ever default on the debt limit if we give him a bill that increases the debt limit but also reduces reckless spending,” said House Ways and Means Committee Chairman Jason Smith, Missouri Republican.

Despite the threat, Republican lawmakers have limited ability to force Mr. Biden to acquiesce to shrinking the size of government. Democrats expanded their hold on the Senate in the midterms, and some moderate Republicans in the chamber have balked at weaponizing the debt limit increase to gain concessions.

Treasury Secretary Janet Yellen notified congressional leaders on Friday that the U.S. is expected to reach its debt limit on Thursday and will take “extraordinary measures” to avoid default. She said her actions will hold off potential default until Congress can pass legislation to raise the nation’s $31.4 trillion borrowing authority or suspend it again.

The White House Office of Management and Budget said the administration is moving to adopt a wide range of regulations this year to “advance key national priorities.” Many of those regulations will come from requirements of the big spending measures.

“The administration will take action to help strengthen our economy by continuing to protect workers’ health and safety, delivering on the president’s commitment to promote competition and economic opportunity, and improving customer experience and access to critical government services and benefits,” OMB said. “Agencies across the administration are working to implement the landmark legislation passed in 2022, including the Inflation Reduction Act, the PACT Act, the CHIPS and Science Act, and the Bipartisan Safer Communities Act, as well as continuing to implement the Bipartisan Infrastructure Law. Together, these efforts will help ensure the president’s critical investments in infrastructure, clean energy, health care, gun violence reduction, and more will increase opportunity and progress for years to come.”

Apart from the nuance of divided government, House Republicans face a daunting challenge with history in trying to curb the scale of government.

In 2016, Donald Trump ran on “draining the swamp” in Washington. The populist Republican was forced to expand the federal workforce during his White House tenure, largely because of the COVID-19 pandemic.

Mr. Trump entered office with nearly 9 million people employed directly by the federal government or through government contracts and grants. By the time Mr. Trump left office in 2021, that figure was more than 11 million.

• Haris Alic can be reached at halic@washingtontimes.com.