The Drug Enforcement Administration closed out last year with a startling statistic: It seized more than 379 million deadly doses of fentanyl in 2022, enough to kill every American, and its haul included twice the number of counterfeit pills that agents seized in 2021.

Two decades ago, fewer than 1,000 people died from synthetic opioids in a given year. Now, tens of thousands of Americans die from the potent drugs annually as Mexican cartels churn out fentanyl-laced drugs with Chinese-made chemicals.

The staggering and steady rise in U.S. overdose deaths accelerated during the COVID-19 years as drug users were cut off from support networks and Washington focused much of its attention on the coronavirus as its most pressing health crisis.

Now, the Biden administration and Congress are under renewed pressure to attack fentanyl.

Signs show that the rate of U.S. overdose deaths is beginning to decrease as the U.S. emerges from the pandemic, yet the fentanyl crisis continues to evolve and is impacting a wide swath of Americans.

Although heroin users have been at risk for years, fentanyl is showing up in stimulants such as cocaine and counterfeit pills are being laced with the drug, killing unsuspecting Xanax and Adderall users.

“Fentanyl presents an enormous profit opportunity for drug traffickers relative to heroin, so that means they are going to push it no matter what policymakers do,” said Keith Humphreys, a Stanford University professor who tracks the opioid crisis. “You don’t need land, good weather, peasant labor, processing of crops, etc. Instead, you can whip it up in a small lab, and every gram is 50 times as strong as heroin.”

The Biden administration is deploying a two-pronged strategy of prevention and treatment for drug users with a parallel effort to disrupt international supply chains of fentanyl with DEA seizures and collaboration with international partners, such as India, where some precursor chemicals for fentanyl are made.

“The increasingly dynamic and complex nature of the international illicit drug trade demands enhanced cooperation with international partners that reflects the reality of a globalized supply chain for illicit drugs and their precursor chemicals,” the White House’s drug control strategy says. 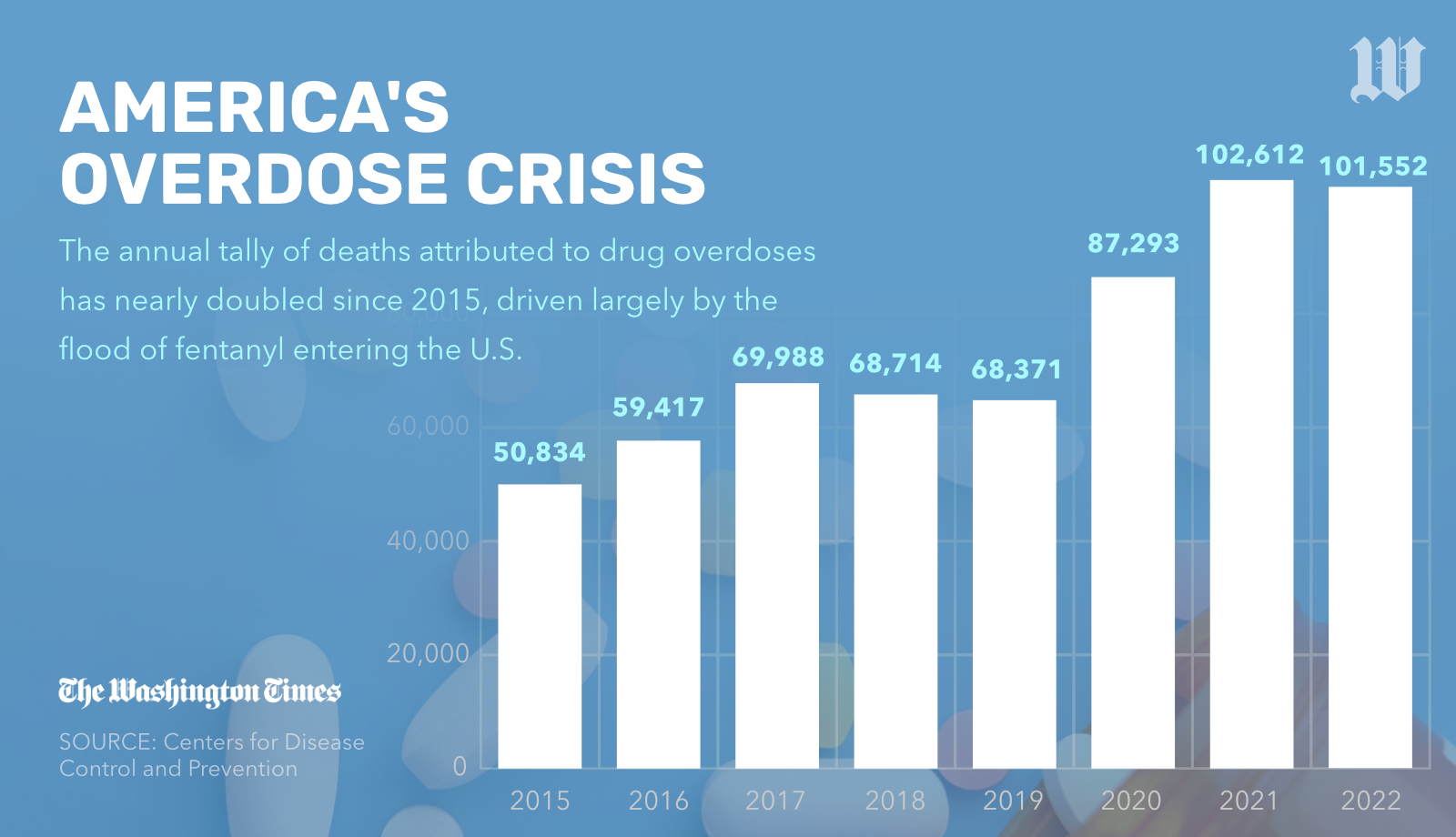 Mr. Biden hopes the massive year-end funding bill he signed will reduce barriers to addiction treatment. It includes more funding for the fight and removes the federal requirement that forced DEA-registered practitioners to obtain waivers before prescribing certain medications, such as buprenorphine, to treat opioid use disorder.

On Capitol Hill, House Republicans have pledged to take a harder line on the problem.

Rep. Morgan Griffith, Virginia Republican, said he will refile his Halt All Lethal Trafficking of (HALT) Fentanyl Act to permanently schedule fentanyl and its chemical cousins as Schedule 1 drugs with no medical purpose.

“We need to make all of these Schedule 1,” Mr. Griffith said at a Jan. 11 roundtable hosted by the Energy and Commerce Committee. “I’m very hopeful that sometime in the next few days we’ll get the newest version of the HALT Act out that would make it permanently scheduled, and I think that’s extremely important.”

Lawmakers also plan to scrutinize the role of Big Tech platforms in the proliferation of synthetic opioids.

Witnesses at the opioids roundtable said fake prescription pills, which may be laced with fentanyl, are available through social media and e-commerce platforms, making them accessible to minors with smartphones.

“We have read numerous reports and heard personal stories from parents who have tragically lost their children to fentanyl and fentanyl-related substances from pills purchased from drug dealers on TikTok,” lawmakers wrote in a September letter requesting information from the Chinese-owned platform. “The loss of these young lives shows not enough is being done to crack down on this illegal activity and prevent criminals from exploiting your platform to sell this deadly poison.”

Each month, the Centers for Disease Control and Prevention issues provisional overdose counts for the preceding 12-month period through its National Vital Statistics System, though data often lags by several months.

The overdose situation started to deteriorate in 2015. CDC data from January of that year shows that 47,500 people died from overdoses in the preceding 12 months.

The death toll steadily increased in the years that followed as powerful synthetics such as fentanyl flooded the street drug supply, though it plateaued at a rate of about 70,000 annual deaths from mid-2017 to 2019.

The numbers started to ramp up ahead of the COVID-19 crisis and steadily increased through the height of the pandemic. Officials believe the pandemic hurt the effort because people suffering from substance abuse were alienated from support networks.

At its peak, roughly 110,000 people died from drug overdoses in the 12 months ending in March 2022 before the rate plateaued and eased slightly over the next several months.

About 107,000 people died of drug overdoses in the 12 months ending in August. The easing allowed the White House to claim some progress.

“For the last two years, the Biden-Harris administration has taken historic steps to remove barriers to addiction treatment, go after drug traffickers and their profits, and get more naloxone into communities. As a result, today’s data continue to show a decrease in overdose deaths for the fifth month in a row,” Dr. Rahul Gupta, director of the White House Office of National Drug Control Policy, said in a Jan. 11 statement about the latest data.

The DEA’s seizure announcement in late December underscored the mix of good and bad news for the administration. The unrelenting flow of dangerous drugs is alarming, though agents were able to intercept a large amount before the pills reached U.S. communities and claimed more lives.

The DEA says fentanyl is being mass-produced in secret factories in Mexico with chemicals largely sourced from China. The drugs are then trafficked into the U.S.

“DEA’s top operational priority is to defeat the two Mexican drug cartels — the Sinaloa and Jalisco Cartels — that are primarily responsible for the fentanyl that is killing Americans today,” DEA Administrator Anne Milgram said in December.

“We’re trying to find out who is doing this and for what purpose. Everything about the importation of this looks very suspicious,” said Leo Lamas, the deputy special agent in charge of Homeland Security Investigations who worked on the case. “It’s drawing our attention because one of our suspicions is, ‘Can this be combined to produce a narcotic?’”

Investigators are testing a “couple hundred pounds” of seized chemicals from the home as part of an ongoing investigation, he said.

The idea that fentanyl or other drugs are being crafted in the U.S. runs counter to the typical pattern, in which drugs are trafficked from Mexico.

“I would not say that’s a common thing, but certainly it is something we have seen,” Mr. Lamas said. “Separate from this investigation, we have found local pill pressers and labs in the United States, not just for opioids but for methamphetamine.”

Although stimulants such as cocaine and methamphetamine are key drivers of overdose deaths, fentanyl is the top problem.

The CDC maintains detailed data on about 51,000 overdose deaths recorded in 32 jurisdictions in 2021. Illicit fentanyl was involved in nearly three-quarters, or about 37,000, of the deaths.

Heroin was involved in about 11% of the deaths, and prescription opioids were tied to about 16%. Cocaine and methamphetamine were found more frequently — in about 28% of deaths for each category — though still paled in comparison with fentanyl.

DEA labs found that 6 in 10 fentanyl-laced pills contained potentially lethal doses in 2022, an increase from 4 in 10 in 2021. The deadly counterfeit pills are made to look like OxyContin, Percocet, Xanax or other brands.

“Most people dying of fentanyl overdoses were using opioids intentionally, including some who were using fentanyl intentionally,” Mr. Humphreys said. “But we are seeing significant numbers of deaths among people who were exposed accidentally, for example in a purchase of cocaine, meth or a pill that is incorrectly labeled as Adderall or Ativan.”

Deb and Ray Cullen, who live in Pennsylvania, told the House Republican roundtable that their son Zachary, 22, died after using cocaine laced with fentanyl.

“This crisis should be attacked with the same priority and intensity that COVID was,” Mrs. Cullen told the committee. “You could not turn on the television without hearing about COVID, its statistics and what the government was doing to fight it. It should be the same for the illicit fentanyl crisis.”

• Tom Howell Jr. can be reached at thowell@washingtontimes.com.