Some Republicans looking for cuts in the massive U.S. military budget want to start at the top.

Key congressional leaders have floated the idea of trimming the number of generals and admirals in the armed forces. They say the ratio of high-ranking officers to enlisted personnel has ballooned out of control and might impede the readiness of the fighting force.

The roughly 900 generals and admirals on active duty today is far fewer than it was in past eras, but the percentage of those officers compared with the number of enlisted troops is near the highest level in modern military history, according to Congressional Research Service data.

Some analysts caution that merely pushing top officers into early retirement would have little impact on raw budget numbers. Cutting their staff or perhaps even the bases, commands or operations they lead could result in more savings, but that type of broad dismantling of military infrastructure would raise a new set of questions with significant national security implications.

Still, some Republicans say the issue deserves a fresh look. They say the Defense Department has proved itself ill-equipped to properly spend the roughly $847 billion allocated in the most recent defense budget bill.

The argument is playing into a clash on Capitol Hill. Conservative lawmakers say commanders in an increasingly woke Pentagon under President Biden are less focused on building an effective fighting force than they are on enforcing COVID-19 vaccinations and promoting diversity and inclusivity in the ranks.

“Frankly, maybe if we would focus our military spending on the soldiers and not having so many generals — the ratio of general officers to enlisted individuals now is so out of whack from where it used to be in our military,” Rep. Jim Jordan, Ohio Republican and chairman of the House Judiciary Committee, said in a recent interview on “Fox News Sunday.”

“Maybe if we focused on that — helping the troops who do so much of the work out there for our great country and maybe focus on getting rid of all the woke policies in our military — we’d have the money we need to make sure our troops get the pay raise they deserve, we have the weapons systems and the training that needs to be done, so we’re ready to deal with our adversaries around the planet,” he said. “That’s what we want to focus on.”

Mr. Jordan’s office did not respond to a request for comment seeking clarification on what such a move might look like or whether he and other House Republicans might float specific legislation to that effect.

Beyond the political minefield that comes with any discussion about military budget cuts is the notion that reducing the number of generals and admirals is divisive within conservative circles. Among Republican champions of the idea was Sen. John McCain of Arizona, but other Republican voices said it might be the wrong approach.

“Let’s say we wake up tomorrow and there’s zero [generals and admirals]. You’ve saved about $1 billion. That’s not nothing, but on the other hand, you can’t run an organization without the senior leaders,” said retired Army Gen. Tom Spoehr, director of the Center for National Defense at the conservative Heritage Foundation. “It would be like a corporation saying, ‘We’re cutting all of the C suite guys.’ It’s mostly symbolic.

“The actual count of generals or admirals hasn’t gone up that much. What has gone up is the ratio of these senior guys to the troops,” he said in an interview. “The reason that happened, by and large, is because we cut the forces, not because we grew a bunch of generals.”

Indeed, historical data shows that the percentage of generals and flag officers has gone up as the total U.S. military force has decreased.

In 1965, the U.S. military had 1,284 generals and flag officers in a total force of nearly 2.7 million, according to Congressional Research Service data. Those generals and officers constituted about 0.048% of the total force. 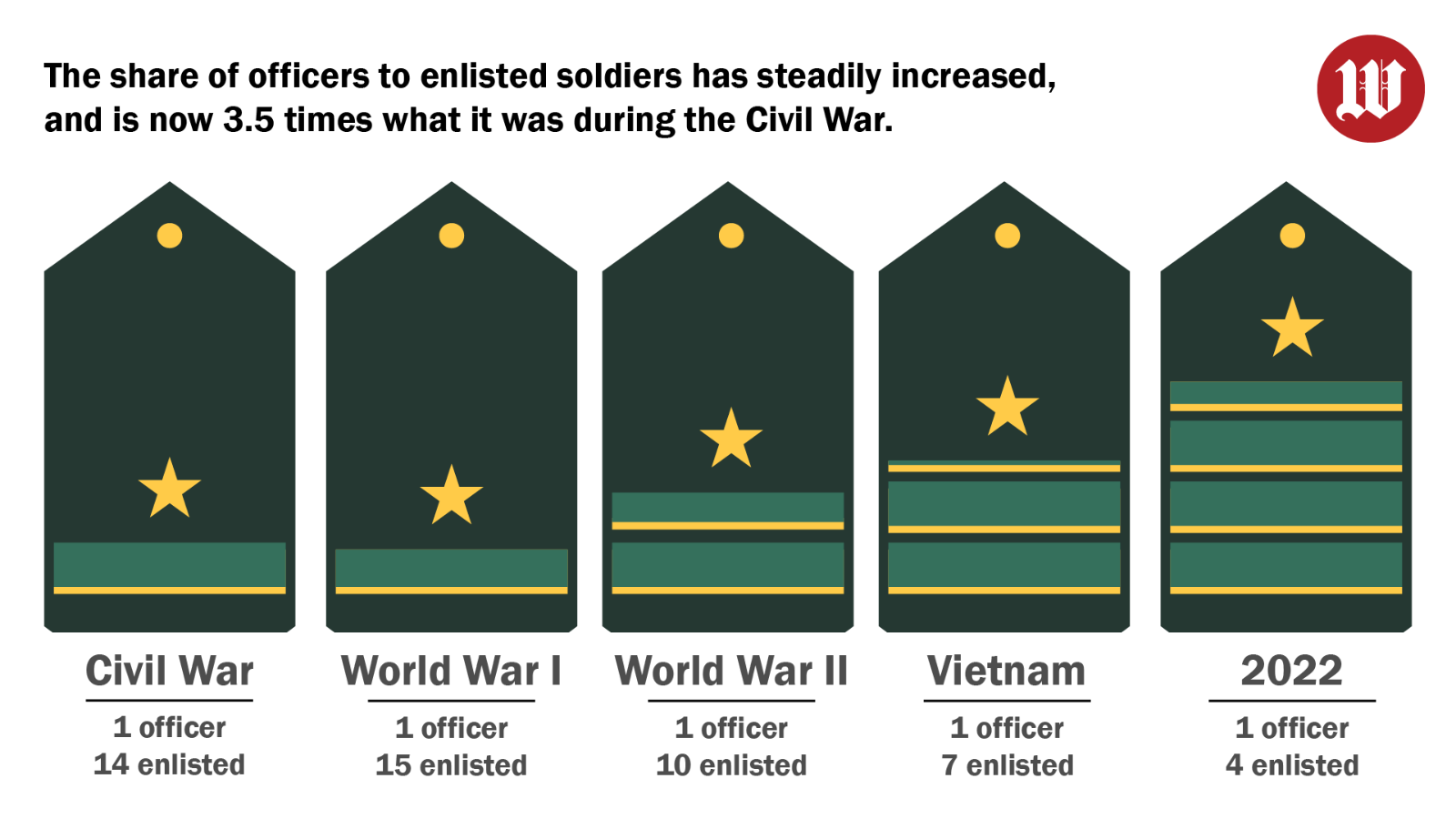 The ratio could grow even more “out of whack,” Mr. Jordan said, with individual military services struggling to meet annual recruiting goals.

By historical standards, the World War II era offers the starkest contrast with today’s figures. During the war, the military had about 2,000 generals and flag officers in a total force of roughly 12 million, a ratio of about 1 general or admiral for every 6,000 troops. Today’s figure is closer to 1 officer for every 1,400 troops, said Marine Corps Col. Gregory McCarthy, who penned a 2017 report for the National Defense University’s Joint Force Quarterly and described the transformation as “rank creep.”

“Although historical numbers are inexact guides and future threats could radically change circumstances, the case for reduction is strong,” he wrote.

In the years afterward, the idea went quiet. Mr. Jordan’s comments suggest that Republicans may once again be willing to put cuts in military brass on the table, but analysts say it’s difficult to determine exactly how effective the cost savings would be.

“There is not a lot of money to be saved by cutting generals unless you also do away with the organizations that they are in charge of. That raises a variety of additional questions,” Mark Cancian, a senior adviser with the International Security Program at the Center for Strategic and International Studies, told The Washington Times.

It’s difficult to imagine how the raw number of generals and flag officers could be reduced without significant changes to military operations. Simply getting rid of generals would likely require reductions in sizes — or wholesale eliminations — of the offices, commands and posts they lead.

Late last year, the Army announced a new post in Germany to coordinate the flood of U.S. military aid to Ukraine. That post is led by a three-star general. Removing that general would help balance the ratio of officers to enlisted troops but would result in little raw-dollar savings. It also would leave the Army’s new post without a leader.

Analysts say they could give hundreds of other examples.

“No one would argue we don’t need that guy,” Gen. Spoehr said of the general leading the Ukraine office in Germany. “The Army keeps a three-star in Israel to maintain a military connection with that country. That seems like good value to me.”

• Ben Wolfgang can be reached at bwolfgang@washingtontimes.com.