Fears of negative impact on U.S. GDP due to coronavirus overstated

Some have argued that the trade disruption caused by the coronavirus puts the U.S. economy in grave danger. These fears are overstated. Exports are about 11.7 percent of U.S. GDP, and imports are equal to about 14.5 percent of GDP, and much of this trade (goods and services) is likely to be little affected by the virus.

Trade statistics, even more so than most economic statistics, are notoriously weak. Most of the trillions of dollars of goods that go back and forth over the world’s borders are in containers that are typically lightly or not inspected. The sheer volume of trade makes detailed inspection almost impossible. There are sophisticated detection devices for drugs, nuclear materials and explosives, but most of the rest is done on an honor system, particularly when it comes to the proper value of a shipment.

Bulk commodities — like coal, iron ore, bauxite, and agricultural grains and fresh fruits and vegetables always have some loss in transit. (Back in the 1980s, I served on a bilateral U.S.-Canadian committee dealing with economic issues. At the time, I remember being astounded by the huge discrepancy between what U.S. and Canadian authorities were reporting in terms of exports and imports between the two countries. It was certainly worse with many other countries. The reporting — because it relies by necessity on many imperfect humans in the chain, and many incentives to misreport — is unlikely to get better.)

There is trade between countries both in physical goods and services. The trade in services has been and will continue to grow faster than the goods sector and, in many ways, is far less measurable. In the past, buildings were typically designed by local architects. Large projects are now often designed by teams of architects and teams of engineers located in many different countries, and the drawings are shared by electronic means in real time. The iPhone is largely designed in California, built from components from dozens of countries, and assembled in more than one country — and its software written who knows where. As a result, there are never-ending trade statistic and tax allocation fights among countries — because there are no commonly agreed upon answers. Google and Facebook and others are everywhere and nowhere.

Keeping in mind the above caveats, our biggest trading partners are Mexico and Canada, closely followed by China, with Japan, the U.K. and Germany in 4th, 5th and 6th places. These six countries account for more than 51 percent of total U.S. trade, and the top 15 countries account for almost 75 percent. Last year, the United States exported more to the U.K. than to Germany. If the proposed free trade agreement is concluded with the newly independent U.K., it is likely that it will uphold as the new 5th largest U.S. trading partner, replacing Germany in the long run. 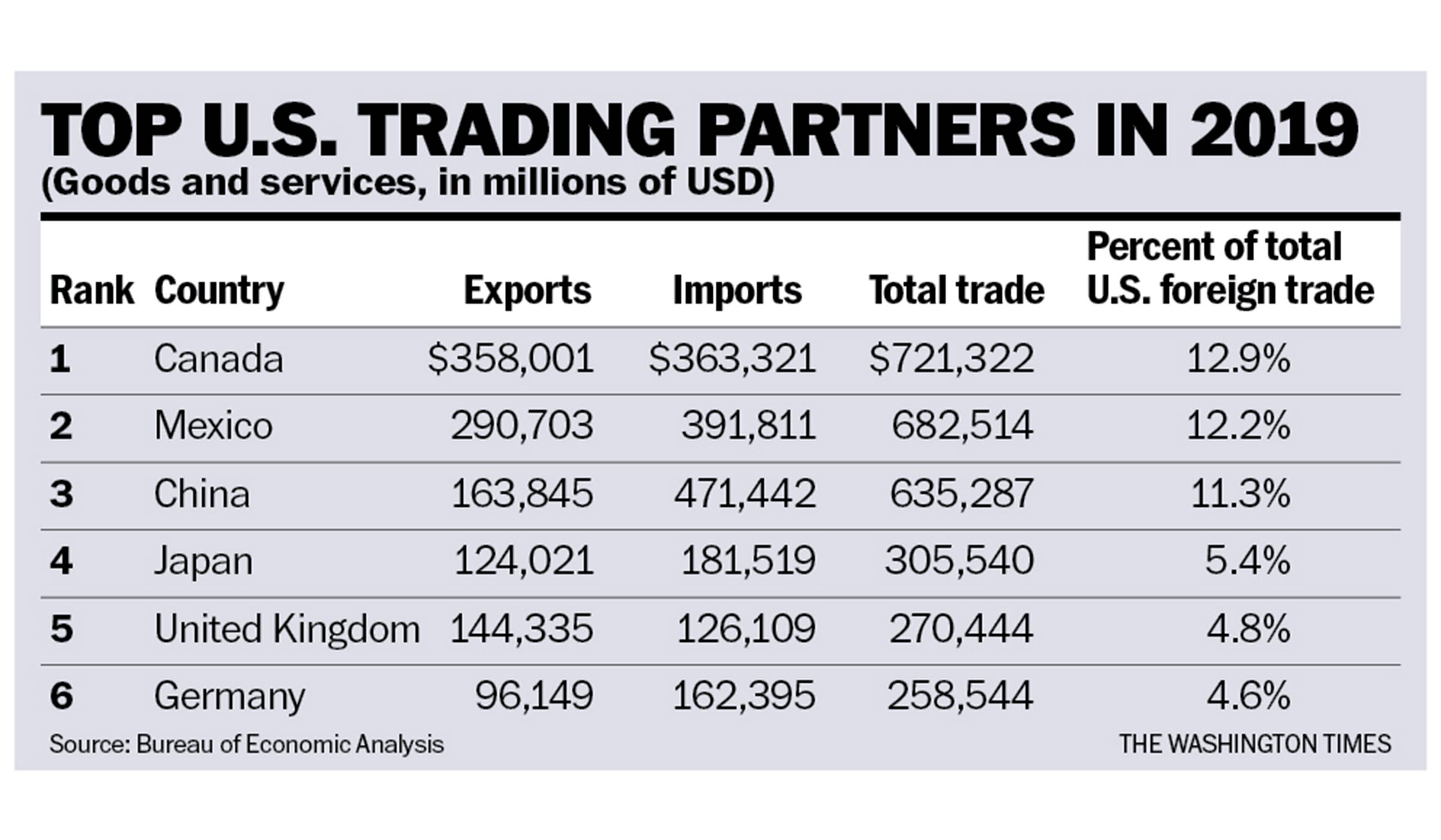 Mexico, once again, elected poor political and economic leadership, and the economy, as a result, was weakening even before the onset of the coronavirus. Thus, it likely that U.S. exports to Mexico will fall, despite the expected benefits from the new U.S.-Mexican-Canadian trade agreement (USMCA).

Canada also has been plagued by weak leadership and counterproductive economic policies under Prime Minister Justin Trudeau. A major rail dispute has greatly disrupted freight and commodity transportation, further weakening an already weak economy, which is again a downer for U.S. exports.

Most experts expect China to have negative economic growth this quarter, which will depress demand for U.S. exports, but the new trade agreement does obligate China to buy more agricultural products from the United States. U.S. imports from China will almost certainly fall, both because of supply chain problems within China due to the coronavirus, and Chinese companies’ credit problems, as well the scramble by U.S. companies to find alternative sources of supply.

The long-standing U.S. trade deficit in oil and gas has been eliminated due to the brilliant engineering and risk-taking by U.S. oilmen who gave us the fracking revolution. We still import some oil but export a lot of natural gas, so it is largely a wash in terms of the economy. If oil prices fall, U.S. consumers will benefit, and if they rise, U.S. producers will benefit.

As China, Germany and many other countries fall into recession, U.S. exports of both industrial goods and consumer goods will fall, hurting the U.S. economy. U.S. agricultural exports of soybeans, corn, wheat, cotton, etc. are likely to remain strong, in part because of the China trade agreement. U.S. imports of machinery, including computers and related equipment, may increase as the price of these items falls due to decreased world demand.

The United States has been a major importer of pharmaceuticals and medical supplies, and there are likely to be some shortages if companies cannot diversify production away from China fast enough, including building domestic plants. The irony is that this process has already been underway because of President Trump’s trade fight with the Chinese.

In sum, the negative impact on U.S. GDP, because of trade disruptions caused by the coronavirus, is likely to be very manageable. Some export markets will be lost, but these will be partially offset by lower prices of foreign-sourced raw materials and components, and finished products. The AI (artificial intelligence) revolution will reduce the comparative advantage of many foreign sellers to the United States, in turn, giving the U.S. economy a boost as more domestic production capability is created.