As part of its popular DC Multiverse collection, the lineup includes Harley Quinn, Bloodsport, Peacemaker, Polka-Dot Man and a “Build-a-Fig” of the cinematic version of the fierce, but not too bright, predator demigod of the land and sea known as the mighty King Shark.

Figure profile: Paraphrased from the McFarlane Toys’ website: “The enormous King Shark, aka Nanaue, is half-human and half-shark, with a childlike naivete that belies the teeth beneath. Add to that a bite that far outcries his bark in this genetic experiment gone way awry, who is far more brawn than brains and always in the mood for his next meal, no matter who is on the menu … nom nom.

Accessories: McFarlane Toys offers some well-needed competition against Hasbro’s Marvel Legends’ Build-A-Figure line by giving collectors a chance to go on a hunt for specific figures to assemble a key character from the DC Comics‘ sequential art and movie universes.

In this case, collectors will need to purchase all of the four Suicide Squad action figures to assemble a bulky and weighty villainous masterpiece.

Each figure’s package contains some of the seven pieces needed to assemble a 9-inch-tall, humanoid version of a Great White shark complete with webbed hands, arms, legs with webbed feet, a back fin and wearing a pair of textured but slightly tattered blue swimming trunks.

The figure can be put together in less than five minutes and features a body that is grey with a lighter chest and belly shade and a shark skin texture with a hint of gills and back ribs and spine. 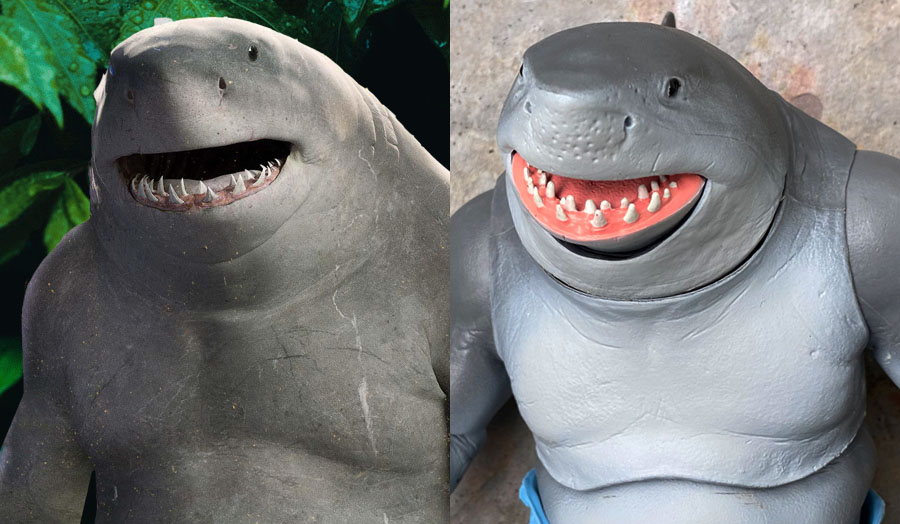 The head offers two beady black eyes, nostrils, and a mouth that opens to reveal a pink pallet and sharp teeth with two rows for the lower jaw.

King Shark is in-scale with the line’s other movie figures and has 22 points of articulation down to flexing its webbed toes and twisting the torso at two separate joints.

One note, is it was nearly impossible to keep its head on. The joint never snapped in place and any twisting would loosen the noggin to be easily pulled off.

Of course, to own this ferocious beast, collectors will need to buy that set of figures

Here is a concise breakdown of each of McFarlane Toys’ Suicide Squad team that offers at least 22 points of articulation, a display base and a full-color trading card.

He wears a silver helmet that covers all of his head and down to his cheeks but still reveals a nose and jawline that looks just enough like actor John Cena, who plays Peacemaker in the movie.

Although this Judge Dread-style, misunderstood villain is considered a world-class marksman, McFarlane only included a metallic broadsword for him to wield in battle.

An alternate version of the action figure is available as a Target exclusive and features a helmetless head sculpt that looks like a more cartoony version of Mr. Cena. 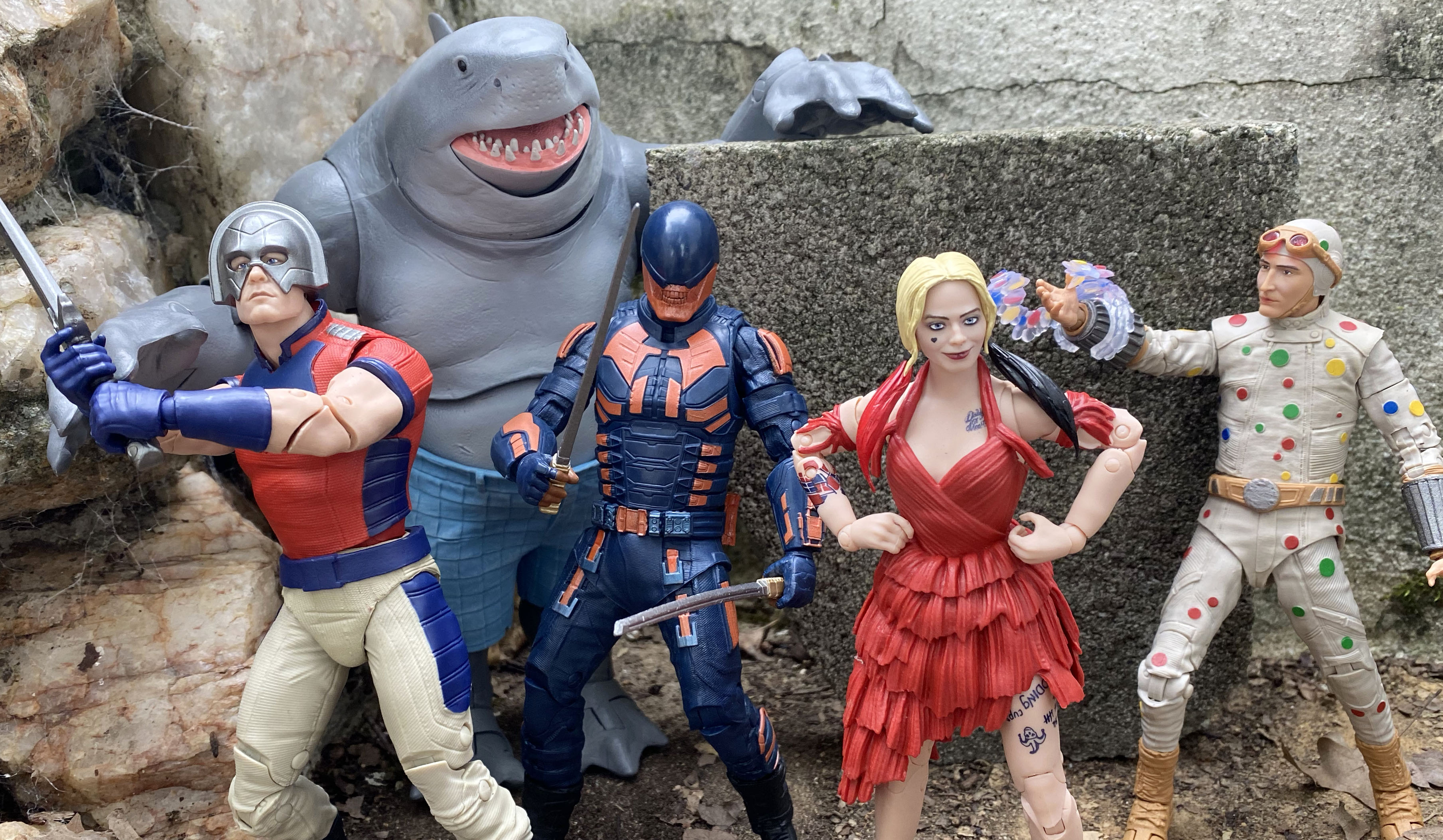 Bloodsport (two-part torso): The famed mercenary wears a film-specific, high-tech suit of blue body armor with orange highlights (in the movie, it’s more bronze), black boots and a full over the head helmet that has a very Xenomorph vibe to it (especially the orange-painted teeth).

Once again, despite being proficient with a variety of firearms, McFarlane decides to give him a pair of katanas to wield instead of some heavy-duty firepower.

I guess guns are politically incorrect these days, but I fondly remember when the action figure company was known for accessories overload especially noting a T-850 Terminator figure from 2003 that included a coffin full of high-caliber armaments.

Also, worth noting is when I tried to pose the figure in a more crouched position its left leg popped off but was easily reconnected with no loss of durability.

An alternate version of the action figure is available as a Walmart exclusive and features a helmetless head sculpt that looks nothing like actor Idris Alba who plays him in the movie.

Polka-Dot Man (head and waist): Perhaps one of the saddest and strangest villains in the DC Comics‘ universe (first appearing in Detective Comics back in 1962) makes for one cool action figure. Abner Krill has the power to use multicolored dots that form on his body as toxic projectiles against his opponents.

Dressed in a full beige jumpsuit covered in yellow, red, blue and green dots, yellow boots and silver gauntlets, he also wears an aviator-style helmet that does not cover a head sculpt that kind of sort of looks like actor David Dastmalchian who plays Abner.

He comes with a pair of removable goggles with translucent red lenses, an extra rubbery gauntlet and a stream of blue, red and yellow dots that can attach to a gauntlet and give the appearance of shooting from his hand.

Harley Quinn (legs): Easily the most recognizable and popular of The Suicide Squad members, the former romantic interest of The Joker comes to life in a 6-inch-tall figure wearing a red rubbery, frilly carnival dress and black boots.

Details include multiple tattoos on her bare leg, arms and upper chest and even a “property of the Joker” tat on her back along with stringy long yellow hair dyed red and black at the two ponytails.

The only miscue is the head sculpt that looks more like actress Emily Blunt than Margot Robbie who has defined the character in cinema since 2016.

Still, it’s much more accurate than Mattel’s 6-inch version of Miss Robbie as Harley released back in 2016.

It’s worth noting that each of the figure’s packaging is a veritable minefield of potential sorrow when extracting the characters. Be very careful of the plastic strapping. When pulling out Bloodsport, I almost snapped a wrist joint when I did not notice a binding holding the arm in place.

Read all about it: DC Comics offers The Suicide Squad: Case Files, Volume 1 ($12.99) that features some of the memorable appearances of the members in sequential art.

What’s it worth: Despite the “R” rating for the movie and although the action figure packaging is clearly marked for owners 12 years and older, King Shark does set up a quandary for any parent whose young offspring might see the collection and its pieces in a store.

Specifically, the assembled figure is just too darn cute to not want to bring home, build and play with. Good luck with that, mom and pop.

For the older collector, McFarlane delivers a faithful set to the film as promised that could have used better facial sculpting, but certainly offers a great way to pose and present The Suicide Squad core team in a display case or office cubicle (for those still working in an office).

I’m looking forward to potential second series of characters hopefully to include TDK, Weasel, the Thinker, Savant, Mongal and Captain Boomerang who would all look great in an action-figure format.