Gauging the return of inflation in a post-pandemic America

The Fed, the administration and Congress must extinguish excess pandemic money to avoid inflation

Quiz: Do you remember these grumpy TV characters?

Quiz: Can you pass a U.S. Constitution test?

Wake up: The fabric of our free society will ultimately collapse without basic decency

Should D.C. become a state?

Will inflation in the U.S. return in a big way? Inflation is a rise in the average price level, caused by an increase in the supply and/or velocity of money.

If a central bank like the Fed increases the money supply at a faster rate than the economy is producing additional goods and services, inflation results — unless the velocity of money declines. Money velocity is the rate of turnover of the money in a given time period.

In 2020, the U.S. money supply by some measures increased by as much as 25%. If velocity had remained constant, the additional money would have resulted in a big increase in inflation. When the economy was forcibly shut down in early spring, the U.S. Treasury at the behest of Congress opened the monetary spigots — in part, by sending checks to most Americans regardless of need in an attempt to preserve purchasing power — even though fewer goods and services were available.

The result was that most people increased their savings rate (reducing money velocity), and by saving rather than spending, inflation was avoided.

What will happen as the economy begins to return to normal as the pandemic subsides? As restrictions on shops, bars, restaurants, travel, etc. are lifted, there will be big surge in demand for the previously restricted goods and services. At least temporarily, demand will likely exceed supply as businesspeople struggle to respond. The velocity of money will increase and over time should approach the long-term trend.

In order to avoid inflation rising at a destructive rate, policymakers at the Fed, the administration and Congress will need to extinguish the excess money created during the pandemic at a rate to offset the rise in velocity. Normally, this would require an increase in interest rates and a reduction in government spending. But the folks at the Fed have said they do not plan on increasing interest rates, and it is difficult to imagine that Congress and the new administration will do anything even remotely serious about reducing spending.

The entire Washington establishment appears to have contracted a case of wishful thinking. The U.S. as a shrinking part of the world economy is increasingly constrained by outside forces. Most major commodities, including food, energy, non-food agriculturals (such as cotton) and metals, have a “one-world price.” That is, they are globally traded, and differences in prices from country to country for the most part are a function of transportation costs, along with taxes and regulatory compliance.

The Wall Street Journal Dollar Index, “which measures the dollar against 16 foreign currencies, lost more than 5% during 2020, its biggest yearly decline since 2017.” As can be seen in the enclosed table, major commodity prices other than energy have registered large price increases during the past year. These trends are likely to continue, as long as the Fed keeps near-zero interest rates. The result will be higher prices on imported goods — there is a limit to the extent that foreign sellers will absorb the price increases stemming from the falling dollar and the rise in basic commodity prices.

If inflation begins to exceed the Fed target of 2% to 3% and inflationary expectations rapidly grow, the Fed will have trouble getting the genie back in the bottle. If the Fed waits too long to raise interest rates – which will probably happen, given the political pressures to keep rates low – the rate increases will need to be large to stem the new inflation. Big interest rate increases will slow the economy or perhaps push it into a recession (those old enough may remember the recession of 1981-82, which was caused by the Fed to stop inflation).

President Reagan and then-Fed Chairman Paul Volcker had the courage to apply and stick with the necessary harsh economic medicine. Will the current crop of leaders have the knowledge and intestinal fortitude to do the same if necessary?

A rise in inflation will accelerate the movement toward the use of various cryptocurrencies and commodity-backed money-like instruments. As the U.S. dollar and other national currencies become increasingly dysfunctional, some will advocate a return to the gold standard — which gave the world a century of stable exchange rates and price stability. If it were only so simple. The problem is that governments collectively own more than 20% of the known stock of gold and can easily affect the price through relatively small sales and purchases of gold. 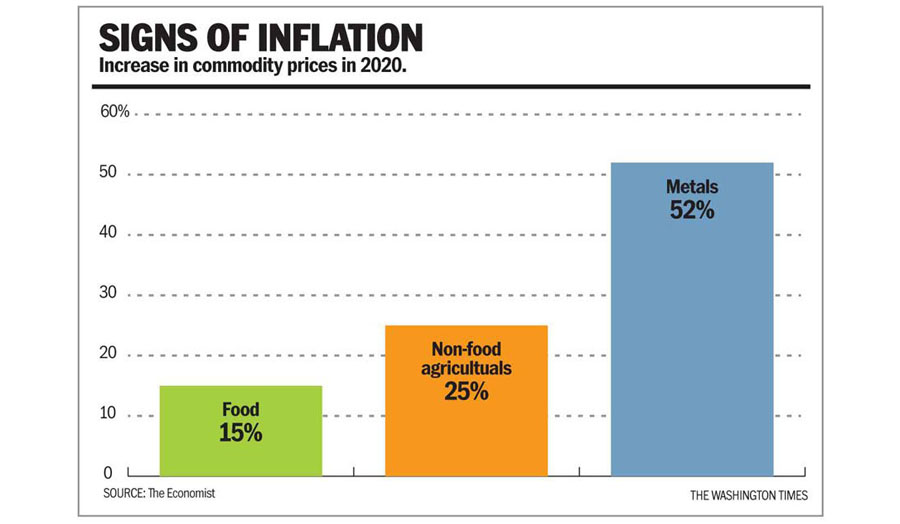 Furthermore, a great body of regulation has grown up around gold to prevent it from being used for illegal activities, e.g., terrorist finance, drug dealing, etc. Cryptocurrencies are also increasingly being regulated (or at least governments are attempting to regulate). Major and heavily internationally traded industrial commodities are likely for many reasons to remain relatively unregulated, despite increasingly being used as a hedge against inflation.

It is a fool’s errand, to give an inflation forecast, but nevertheless here goes: So, after a period of quiet in early 2021, expect increasing monetary turmoil and higher inflation over the next several years.

Wake up: The fabric of our free society will ultimately collapse without basic decency

The many reasons Biden should not enrich Iran’s rulers

What the French Revolution can teach us about ‘woke’ culture

Trump impeachment: The complexities of removing a president from office

Tired of winning, Biden opts for failure in the Middle East

Impeachment charade hurts all of America

Offsetting the misery of the U.S. government’s spending disaster