Who caused the gas price increase, Putin or Biden?

Roe haunts from its grave: Dobbs opinion failed to overrule its core rationale

Things finally come to a head ...

President Biden and his team have been saying it is not this fault for the gasoline price increase; it is Russian President Vladimir Putin’s fault. Is that true?

What do the facts show? The last full month former President Donald Trump was in office, December 2020, the average retail price of gasoline in the U.S. was $2.20 per gallon. Mr. Biden, upon taking office in January, immediately declared war on the fossil fuel industry — as he said he would. He shut down construction on the infamous Keystone pipeline during his first week. His administration took away drilling permits and leases on federal land, denied permits for other pipelines, discouraged banks from lending to the petroleum industry, and held up permits for new or expanded LNG terminals to make exporting LNG more difficult and expensive, among other things.

The predictable result of Mr. Biden’s reversal was a large decline in oil and gas production and increased prices (some of this effect was also due to the pandemic). Retail gasoline prices rose each month, and by December 2021, a year after Mr. Biden took office, the average price had risen to $3.31 per gallon — up $1.11 in one year. The U.S. went from being self-sufficient in gas and oil and from being a major exporter to net importer — including oil from Russia. From the time of the buildup to and the actual Russian war on Ukraine, gasoline prices have risen an additional 95 cents per gallon (as of March 19) to an average retail price of $4.26 per gallon.

Mr. Biden blames Mr. Putin for this price rise, yet most of it started before the war. So, how did Mr. Putin become responsible for the earlier price increases? 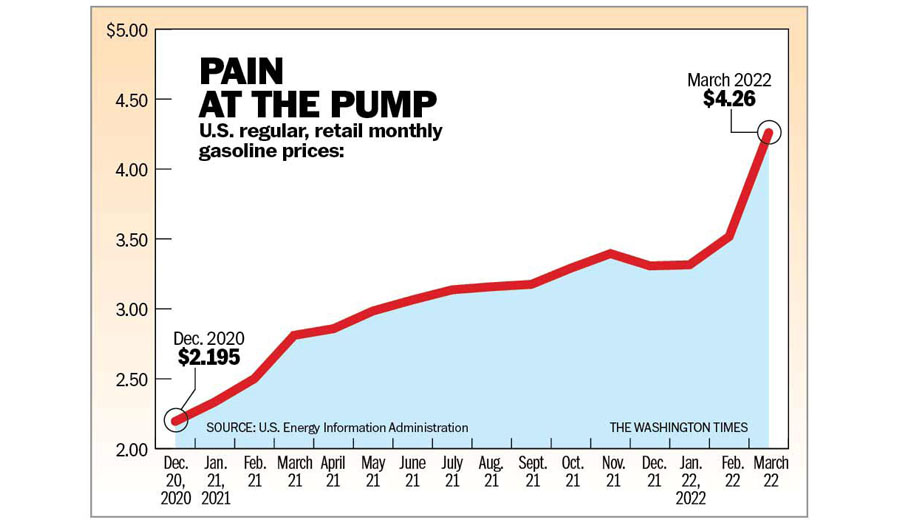 The Russians need high oil prices in that the country is one of the top three oil and gas producers and exports approximately half of its production. The Russians have a higher cost structure than U.S. producers, which is another reason they favor high prices. Oil and gas sales account for the bulk of Russia’s export income, and the country is highly dependent on export sales of natural resources because it produces little else (unlike China) that the world wants to buy.

Countries have a vested interest in discouraging production by their competitors. To that end, bribing foreign government officials to engage in policies and actions that undermine their national interest has been used for hundreds of years.

There is considerable evidence that the Russians have bribed foreign officials and laundered funds to support groups that lobby against oil and gas production and distribution in many countries. That the Russians are doing this is not the least bit surprising – what would be surprising is if they were not doing it — because it is clearly in their national interest.

Mr. Biden is openly allied with “green groups” opposed to the fossil fuel industry. They are major funders for the Democratic party and have been remarkably successful in getting the Biden administration to adopt their policies. The question is, who funds the “green groups”?

If most of the increase in oil prices occurred before the start of the war, and if Mr. Biden is saying Mr. Putin is responsible for the oil price increases — is he in effect saying that without Mr. Putin’s money, the “green lobby” would not have sufficient funds to succeed as they have with their agenda?

For years many journalists, investigative reporters and others, including yours truly, have looked at the evidence of Russian manipulation of Western governments, including the U.S., through both legal and illegal funding of politicians and their allies. The evidence is overwhelming — from many different credible sources, much of which has been published in the world’s press — that the Russians succeeded in derailing fracking and other new production in many places.

It is curious, both by topic and timing, that a writer for The Washington Post, Glenn Kessler, who claims to be a fact-checker, published an article on March 17 asserting that the allegation that Mr. Putin had indirectly funded a particular California environmental group is not true. His evidence is that they and their off-shore law firm have denied it — the Jussie Smollett defense — despite considerable reason to believe otherwise. And, what about all of the other environmental groups? And what about Mikhail Lesin, the former Gazprom senior official and founder of the propagandist RT TV network for Mr. Putin, who was the victim of an unsolved murder in his Washington hotel room in November 2015? Lesin almost certainly knew both the sources and ultimate recipients of the Russian money. He was rumored to be in Washington to meet with the FBI.

The rise in energy prices is clearly due to production restrictions by the Biden administration. Did Russian money motivate the adoption of such bad policies, or were they merely the product of second-rate brains unable to think through the consequences of their actions?

• Richard W. Rahn is chair of the Institute for Global Economic Growth and MCon LLC.