LISTEN: Who is at greatest risk from omicron? CDC stats may surprise you 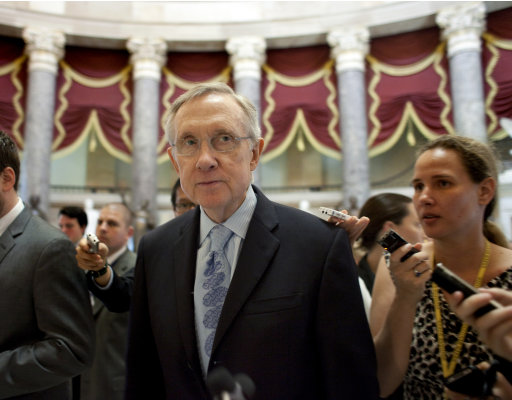 The U.S. House of Representatives passed the debt ceiling bill otherwise known as Budget Control Act of 2011 early Monday evening. The final vote tally was 269 to 161. The legislation had bipartisan support, bringing in 174 Republican and 95 Democratic “yes” votes. Though, there remains bi-patisan opposition in the Senate, the bill is expected to pass as of Tuesday morning.

A bi-partisan twelve member joint committee or a “super congress” as some are calling it, included in the debt ceiling bill, will be set up following the legislation’s passage. Member of the joint committee will be appointed by the four leaders in both parties from the upper and lower chambers. The committee has until Thanksgiving to produce a proposal to cut $1.5 trillion in future deficits. Congress has a deadline of December 23 to vote on the joint committee’s recommendations.

Senate Majority Leader Harry Reid touted the joint committee on Monday afternoon and told reporters, “Everyone knows that a joint committee was my proposal. I’m glad that Senator McConnell has put his arms around this. I hope that we can get something done. I was just told as I was walking out of this, ‘I hope this doesn’t affect the vote over there today.’ I was told that Representative Cantor said that he…someone just told me that Cantor said that revenue could very well be part of what we do with the joint committee.”

House Majority Leader Eric Cantor’s office sent out a statement refuting Mr. Reid’s claim saying, “Nothing could be further from the truth. As Leader Cantor has said since the beginning of this debate, House Republicans will not agree to tax increases. Period. Senator Reid’s claim is absolutely FALSE.”

Unlike most pieces of legislation, though, the reform package kicked out by the joint committee would only require a simple majority in the Senate not 60 votes to crack a potential filibuster on that chamber’s floor. The fact the committee’s proposals can bypass the Senate filibuster and can put forth any kind of reform to the federal budget hardly sits well with some members of Congress.

Senator Jeff Sessions, Alabama Republican, expressed in his remarks on the floor last week he does not favor the joint committee:

I am also concerned about the dubious special committee. It is a plan that allows Congressional leaders to dictate critical national issues without being subject to full committee process and without amendment. Such actions are a serious evasion of historical Senate procedure. I strongly believe with encouragement from the Leaders that our regular process could produce a better result. If the White House or the Democrat leadership in the Senate had taken the legally required budget process seriously at any point in the last year—if they had presented a single credible plan to cut spending—we wouldn’t be here right now in the 11th hour.

Mr. Sessions has already expressed he will not vote for the House passed budget control act on Tuesday afternoon.

Leaders are giving few clues regarding who they plan on appointing and most lawmakers are either not interested in the job or keep their interests in the committee low key. Who would want to serve on the joint committee, though?

There are two Senators who have expressed interest in being appointed on the Super Congress.

I asked Senator Scott Brown, Massachusetts Republican, if he would be interested in serving on the joint committee, if Senate Minority Leader Mitch McConnell, Kentucky Republican, appointed him and Mr. Brown answered quickly, “Yeah sure…of course.”

Senator Mark Warner, Virginia Democrat, told Fox News on Tuesday morning he is also interested in serving on the joint committee. “This is a step forward towards deficit reduction.” Mr. Warner will vote yes on the debt deal on Tuesday afternoon.

“Senator McConnell and I have talked very briefly about this. I’ll be interested to see what ideas he has for his own people. The decision is totally his, but I’m going to make that decision in subsequent time. Two weeks after this bill is passed and it’s extremely important that I pick people who are willing to make hard choices but aren’t locked in,” said Senator Reid when I asked him  on Monday who he would be looking at for the joint committee.

“One of my friends asked in here here asked me and he said he wanted to be on the joint committee, and I think it doesn’t bode well for me to choose someone that the world  knows how they feel about before they go into it. I think we better look at other avenues. I best pick three people, including the co-chair, that will work toward a solution for the  long term debt of our country.”

A spokesman for Senator McConnell reportedly said the Kentucky Republican would also not look at whether or not a Republican Senator voted for the bill as a criteria for an appointment on the joint committee.

“I was referring to people who said the committee was a waste of time—nothing will happen there. I just think we have to go into this with people who have eyes wide open willing to make difficult choices but yet understand the political reality of the world we are in,” he said.

Senator Ben Nelson, Nebraska Democrat, could probably count himself out. Mr. Nelson has been a vocal critic of the joint committee and told me on Monday that while he would like to see those who can make “balanced decisions” on the joint committee, “I have reservations about a committee, in any event. I’m not anxious to cede any of my responsibility to a group of others.” Mr. Nelson later added, “. I wasn’t a fan of the base realignment closing commission. I always voted against their proposals.”

Senator Lamar Alexander, Tennessee Republican, likes the idea of a joint committee that will deal with the debt ceiling, but Mr. Alexander did not say one way or another if he was interested in actually being a member of the committee.

“Well I think it’s a good idea. It’s like the base closing commission that we have or the Harry Byrd committee on spending that was appointed around the time of World War Two. It’s appropriate for Congress to select a committee of it’s own members—no outside experts nobody from the administration to deal with an especially difficult issue. I think it’s a good idea and it’s likely to work,” the Tennessee Senator said.

COVID-19 shots are not vaccines

Just say no to Biden and Fauci's universal vaccination nation