Adventure in the Cemetery

Hanna-Barbera’s classic cartoon series returns in a buildable format to send the Mystery Inc. gang on some tactile interactive adventures in which they visit the old West, ancient Egypt and, much more fitting, a haunted mansion, a witch’s forested den and a graveyard.

Set profile: Based on the episode “The Legend of Alice May,” from the 2010 first season of “Scooby-Doo: Mystery Incorporated,” the tale takes place in the town of Crystal Cover. It finds Fred Jones smitten with high schooler Alice May while the gang investigates an evil entity named Ghost Girl, appearing during prom night and stealing male dates.

The gang’s search for answers, and the missing teenagers, leads them to a cemetery and the crypt of Deacon Carlswell, the alter ego of one of Mystery Inc.’s early villains, the Creeper.

Accessories: Owners embellish a hard plastic, smooth, mossy green patch of the cemetery base — 14 inches long by 9 inches wide — that contains an empty grave and requires assembling a mausoleum with a roof, open door but no rear wall.

The completed, cartoony diorama features a yellow mushroom patch, a leafless tree, five bats to hang on the branches, a removeable mound of dirt to cover the open grave, a bouquet of flowers to attach to the grave cover, path stones, a pair of tombstones and a coffin, with the name Carlswell on its sides to lay in the crypt.

Yeah, that’s some level of detail, especially for the mausoleum that boasts a purple roof insert with slate shingles, crumbling stonework, a gargoyle perched at its top and two white columns.

Heck, even positioning the bats offers a pretty slick simulation. Owners use milky white, soft plastic strands and brown connectors to attach three bats, wings fully extended, to branches to simulate flight. The two sleeping bats also easily attach to branches between their claws. Those bats will remind nostalgia buffs of the opening of the 1960s original show.

However, the most important part of the set is the 3-inch-tall, mildly articulated, stylized Playmobile versions of Fred Jones, Daphne Blake, Scooby-Doo, Ghost Girl and a glow-in-the-dark skeleton.

Blond-haired Fred wears his white-and-blue outfit with orange kerchief and blue collar. Daphne has bright orange hair and wears her purple miniskirt and top, purple shoes, a green scarf and comes with a purse.

Playmobil again offers a spot version of the Great Dane with a blue dog collar and yellow tag and a translucent base to help him stand on his hind legs. The pooch also gets a black top hat for no reason that I could think of, other than each new playset offers Scooby with themed headgear such as the Western Adventure has him in a cowboy hat.

The best of the bunch is Ghost Girl, dressed in a long green-and-purple skirt with a webbed top. She has pulled back, purple hair, sullen glowing green eyes and red lips. It’s the best version one could hope for while constrained by the kid friendly Playmobile mini-figure design.

Owners can also remove her hair and twist the head around to show the face of a near featureless Alice May (almost as scary as her alter ego).

Conspicuously absent, and sure to be demanded by younger role players, is Velma Dinkley and Shaggy Rogers. Of course, parents will need to buy other sets to get the figures. More on that later. 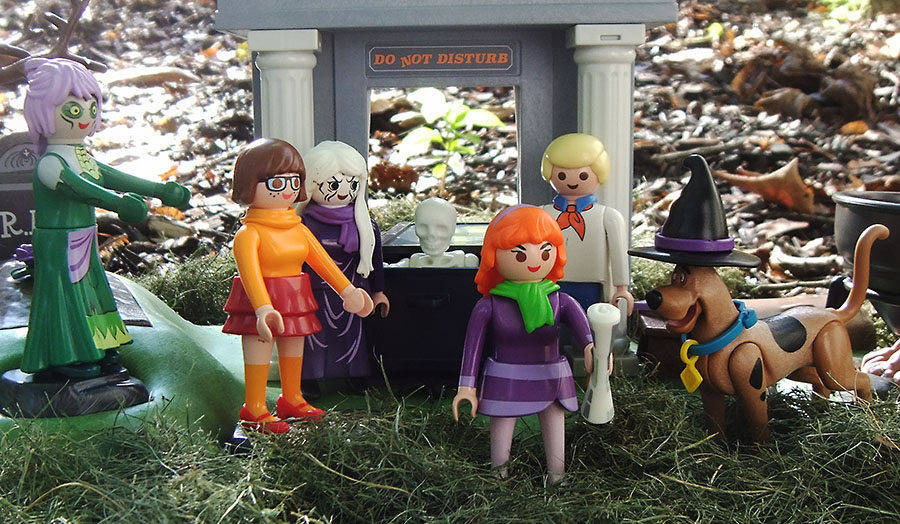 Once assembled and with figures ready to go, the diorama offers some clever activities to bring it to life.

First, the skeleton attaches to a shredded piece of plastic wood planking in the grave and with the press of a red button on the base, it pops up, pushing the covered dirt piece in the air and revealing the boney figure.

Next, as a figure walks through the mausoleum entrance, pushing the gargoyle back, it causes two white pieces of plastic (faux granite) to fall toward the potential victim.

Finally, and by far the best of all, the coffin offers a slick trick that one might find in a magic set hawked by Marshall Brodien in the 1970s (aka the wacky wizard Wizzo on Chicago’s “Bozo’s Circus”).

Specifically, slide out a tray, place the skeleton on the slab, close the coffin, perform the magic, open the tray and skeleton is gone. Close the tray, more magic, and open the coffin again, and the Skelton is back. I can see giddy children dazzling parents with this bit of classic prestidigitation.

If all of that stuff was not enough to play with the cemetery, Playmobile also offers a shovel, a rubbery net to capture the villain, three doughnuts for Scooby, a rolled-up newspaper, a flashlight and translucent card of Ghost Girl, used to project in the Mystery Inc. van or the Haunted Mansion playset (sold separately).

Now, the easiest way to add Velma to the action is with the purchase of the new playset, Adventure in the Witch’s Cauldron (38 Pieces, $19.99).

Perfectly complementing the graveyard motif, the set contains a full witch’s cauldron diorama on a moss green base with a translucent fire that has an actual twinkling lights embedded underneath (2 AA batteries required) to offer the simulation of a crackling flame underneath a pile of sticks.

Owners also get a brown-haired Velma, with painted-on glasses and freckles, wearing her classic orange sweater and red skirt and a Scooby-Doo with a removeable black-and-purple pointed sorcerer’s hat.

Equally exciting, the set’s villain figure is Zeb Perkins (from the classic 1969 episode “Which Witch is Which”) dressed up as a ghoulish witch in a flowing purple garb and a white soft rubber wig that is easy to remove to twist the head around and reveal Jeb’s face.

The cheapest way to acquire Shaggy is with the Scooby and Shaggy with Ghost set (22 pieces, $12.99). Yeah, you get another dog figure but also a ghost figure and Shaggy.

He wears a green T-shirt, brown pants, black shoes and that famed shaggy blond hair. He comes with a flashlight and hamburger (that must be assembled). 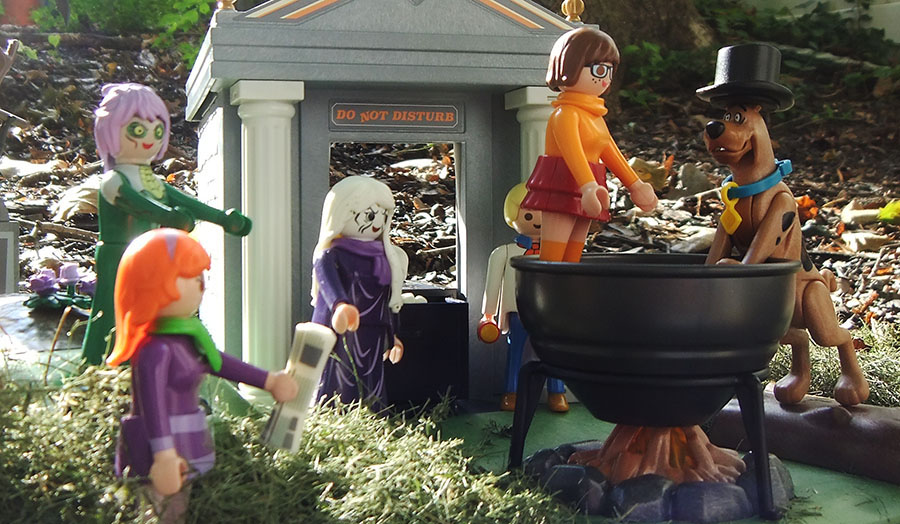 Builder’s advice: Geared for youngsters 5 years and older, the set requires the assembly of 70 pieces and attaching 12 stickers to assemble the cemetery landscape, crypt, the figures and extras.

An adult can build all in less than 30 minutes as long as they carefully scour the 17-page, full-color instruction manual that also includes bios on all of the characters in the set for the kiddies. One adult, who will remain nameless, had no clue how to attach the bats even though he stared at the manual over and over again.

Some may have trouble putting yellow pegs in the mausoleum columns, which already have pegs, and attaching the completed work to the cemetery grounds. The pegs could have easily already been attached, and this is just busy work as well as requiring adding two stickers per headstone.

Although the figures are almost completely assembled right out of the bag, once again as seen in previous sets, attaching two plastic skirt pieces for Daphne leads to a problem. The skirt pieces tend to pop off with the figure in use.

Thankfully, the sticker duty is fairly simply with only a large piece to lay on the floor of the mausoleum, requiring careful placement.

Watch it: In 2013, Warner Bros. Home Entertainment released on DVD “Scooby-Doo! Mystery Incorporated: The Complete Season 1” ($19.99) that compiled all 26 episodes including “The Legend of Alice May” originally seen on the Cartoon Network. Both seasons of the show are also available to stream via YouTube ($39.99 for high definition versions).

What’s it worth: The Cemetery Adventure as well as other playsets from the entire line reveal the depth, passion and respect paid to the Scooby-Doo franchise by the Playmobil toy makers.

For collectors, it’s a nostalgia-winning formula and nearly impossible to resist, thanks to those tiny, unnecessary extras such as the awesome bats, a pop-up skeleton and offering villains from the actual shows.

One hopes older Scooby fans with children will expose them to this well-designed collection, rich with role-playing potential.

Fans should also be highly interested in, following Playmobil’s release of the Mystery Van last year, one of the icons from the original show opening, the Haunted Mansion playset (177 pieces, $99.99). The purple-and-green dwelling features a trapdoor, a falling chandelier, a staircase that turns into a slide, a revolving door, a coffin with spooky sounds and minifigures including Dracula.