German toymaker Playmobil exposes children to another legendary pop culture universe with its collection of Scooby-Doo playsets and figures.

Hanna-Barbera’s beloved cartoon series, which has existed in various iterations for more than 50 years, comes to life with a line-up that includes a set featuring Scooby, Shaggy and a Ghost ($12.99); blind bags containing some the classic 1970s villains ($3.99 each); and the signature vehicle used by the Mystery Inc. gang to travel to their greatest cases.

Figure profile: As the mobile headquarters of the investigative team, this colorful, 1960s-style panel van offers plenty of room for Norville “Shaggy” Rogers, Fred Jones, Daphne Blake, Velma Dinkley and the male Great Dane Scooby-Doo to travel to and plot out their next adventure.

Accessories: The 10-inch-long, 5-inch-tall vehicle arrives with an iconic color scheme of robin egg blue with a greenish-yellow striping adorned with orange flowers around the van, and each side of the vehicle has a greenish-yellow area with “THE MYSTERY MACHINE” logo in orange.

The vehicle features a windshield attached to a removable cab exposing the driver and front passenger seat, a turning driver’s wheel, a sliding side door, rear doors that open, a removable roof, rubber tires that roll, and two green seats and an orange bench chair that folds down in the rear for other figures. 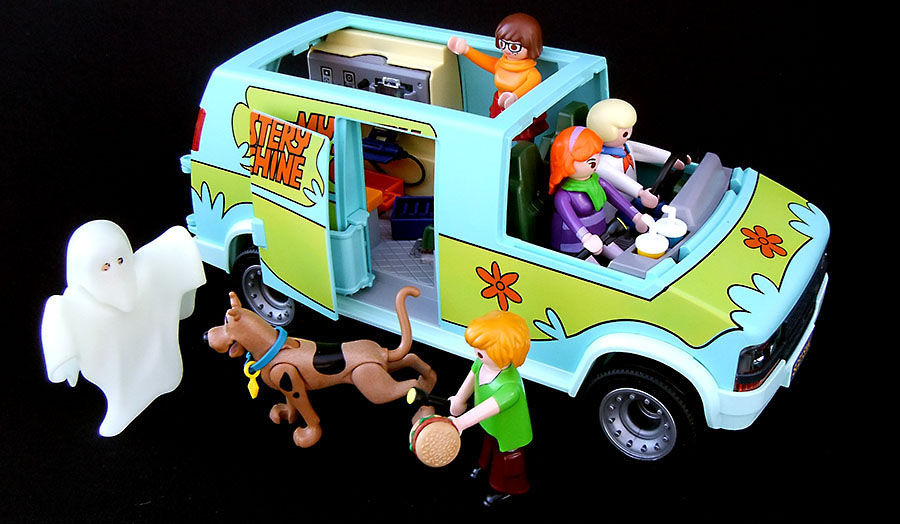 The van interior boasts a yellow-and-grey computer console area with multiple, nonremovable devices and a monitor area that can hold a translucent ghost card that slides into a slot. Two come with the set.

The cards are thumbnail-sized pieces of clear rectangular plastic with a character sticker attached.

With help from an AAA battery and a pair of buttons, the console area lights up to either offer a strobing effect or illuminate the ghost card for a better view.

The console area also has a blue, rifle-shaped weapon tethered via a rubber cord to the area. I have no idea of its potential function, but it reminded me of a Ghostbusters’ Neutrona Wand.

The Mystery Machine is a fairly faithful recreation for sure, but my only minor gripes are the original van was more of a compacted Chevy Sportvan rather than a longer Express-style van and the missing flower hubcaps on the tire rims. No excuse for the missing hubcaps, but kids will appreciate the larger interior area of the longer van.

The vehicle set also comes with a ridiculous amount of extra, loose accessories including a camera with rubber strap, a flashlight, two boxes of Scooby Snacks, two drinking cups (of course, the van has holders in the front passenger area), a map, a slice of pizza, a doughnut, one hot dog, a GPS device, an orange tray to hold stuff and a rack to hold the ghost cards.

Of course, that’s to help the most important part of the set, 3-inch-tall, mildly articulated, stylized Playmobile versions of Fred, Daphne and Velma capturing each in their classic 1970s garb.

So parents will also be compelled to buy the set featuring Scooby and Shaggy to get the gang back together.

It offers a perfect version of the Great Dane with a blue dog collar and yellow tag, a rope leash to easily attach to the collar and a translucent base to help him stand on his hind legs. The pooch also gets the best articulation of the figures  with movable legs, jaw, neck and tail.

Shaggy wears a green T-shirt, brown pants, black shoes and that shaggy blond hair. He comes with a flashlight, hamburger (that must be assembled), a ghost card to store in the Mystery Machine and pack of Scooby Snacks.

The villain in the set is a perfect recreation of the Phantom of Vasquez Castle offering a classic example of a ghost in a white sheet.

The two-piece, glow-in-the-dark, white folded plastic fits over the character’s body and head with the faux-sheet even having two eye holes. The figure that wears the costume pays homage to cheesy magician Bluestone the Great dressed in white with a shirt exposing his red chest hair and complete with a long mustache.

However, most intriguing of Playmobil’s Scooby-Doo line is the mysterious blind bags that contain a memorable villain seen in the first season of the show.

Each 3-inch-tall figure needs to be assembled (roughly 12 pieces in a bag) and most have hard plastic costuming pieces that snap over the bad guys head and body and include a ghost card. 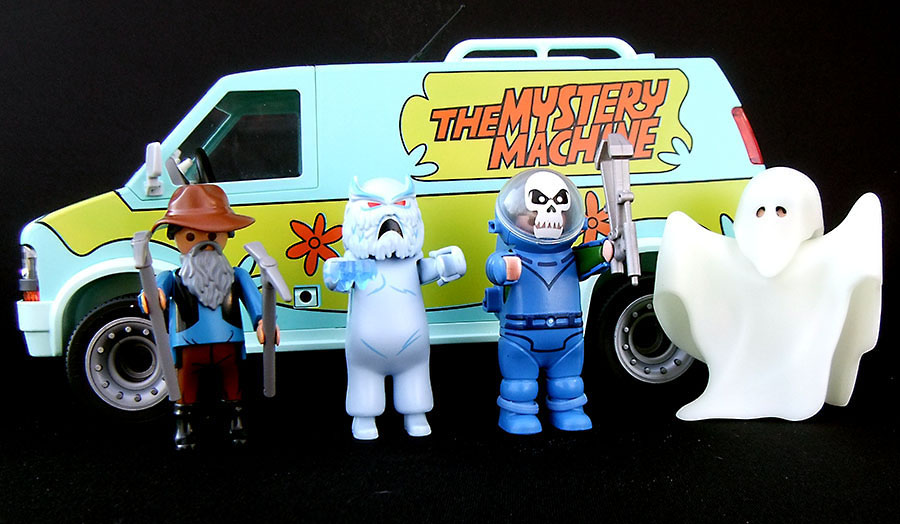 Here’s a look at a few villains sure to make older fans of the shows grin as well as scour stores on a pop culture treasure hunt.

Space Kook — One of the best of the bunch, the figure highlights the alter ego of farmer Henry Bascomb, a cackling extraterrestrial wearing a space suit, seen in the 1969 episode “Spooky Space Kook.”

Children build the figure of Bascomb and then attach his cool disguise that includes the blue suit, arm covers and translucent helmet with a skull imprinted on it. The disguise even requires attaching small blue rubber bands to keep the suit held together at the feet. The Kook can also wield the included hydraulic clamp.

Miner Forty Niner — The fourth episode of the original series called “Mine Your Own Business” offered a bearded villain and was the disguise of Gold City Guest Ranch caretaker and crook Hank. The perfectly recreated figure features blue-and-yellow garb with a black vest and has a detachable grey beard and brown hat. It comes with a pair of pickaxs.

Snow Ghost — Featured in the 1970 episode, “That’s Snow Ghost,” this impressive Playmobile figure presents Wolf’s End Lodge manager Mr. Greenway and his furry creature disguise. Greenway wears the same multi-shaded green outfit seen in the show. Two pieces of blue plastic costuming with painted highlights snaps over the figure as well as a full head mask mimicking the scowl and furry eyebrows of the snow creature. Oddly, the show featured a white beast rather than blue, but the design is dead on.

Builder’s advice: Geared for youngsters 5 years and older, the set requires the assembly of 72 pieces to build the Mystery Machine, the figures and cool extras.

Attaching two plastic skirt pieces are required for Velma and Daphne and that leads to a problem. Daphne can sit fine, but anytime Velma was placed in a sitting position, her skirt pieces popped off.

Luckily, the van is pretty much fully painted and requires only eight stickers to finish off the Mystery Machine. The most difficult part is aligning two stickers on the rear van doors.

Parents should help youngsters with the stickers as well as when putting together the rubbery wheels on the rims. 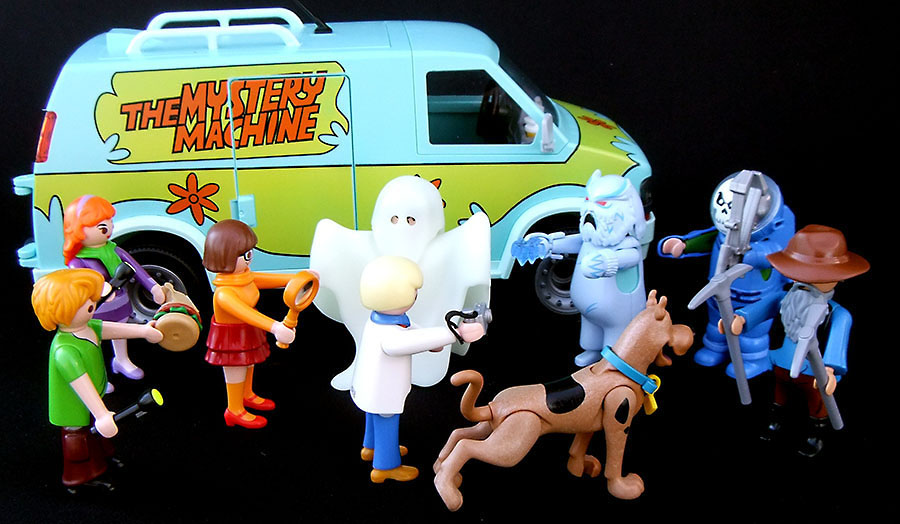 Watch it: Late last year, Warner Bros. Home Entertainment released on Blu-ray the “Scooby-Doo, Where are You!: The Complete Series Limited Edition 50th Anniversary Mystery Mansion” ($89.99) that compiled high-definition versions of all 41 episodes of Hanna-Barbera’s original series that ran on CBS during its Saturday morning line-up from 1969 to 1978 in various iterations. It’s the perfect complement to introduce youngsters to the mythical dog and his owners.

What’s it worth: For collectors, the Mystery Machine and those blind bag treasure-hunt figures should be a no-brainer for legacy fans of those meddling kids.

However, this collection is truly a child’s role-playing bonanza. Rich with accessories and cartoon legends, the line-up will offer hours of fun for the new Scooby-Doo fans in the family.

By the way, the creators’ nostalgic passion for the collection is obvious as they have done an admirable job in bringing the world of Scooby-Doo into the Playmobile universe.