Spin Master debuts its version of the Dark Knight and Justice League universes with a new line of 4-inch and 12-inch-tall, multi-articulated action figures.

As its initial offering to its licensing partnership with Warner Bros. Consumer Products and DC Entertainment, the company delivers a familiar group of heroes and villains. The first wave of the collection includes cartoon and sequential art style versions of the Batman, Robin, Joker, Superman, Shazam! and a twisted female, romantically tied to the Clown Prince of Crime.

Figure profile: Paraphrased from DC Comics’ website — Promising psychologist and intern at Gotham City’s Arkham Asylum, Dr. Harleen Quinzel falls madly in love with her patient the Joker, helps him escape and adopts a new identity as his sidekick and girlfriend. What could possibly go wrong?

Accessories: Owners get an 11-inch-tall version of the colorful character sporting yellowish blond hair in a double pigtail with pink-and-blue highlights and wearing a red-and-black vest, bodice, gloves, full pants and boots (one red and one black, of course).

Details such as her bare pasty white midriff and lower arms match her equally pasty face highlighted by bright red lipstick and a hint of blue and red eyebrow liner. 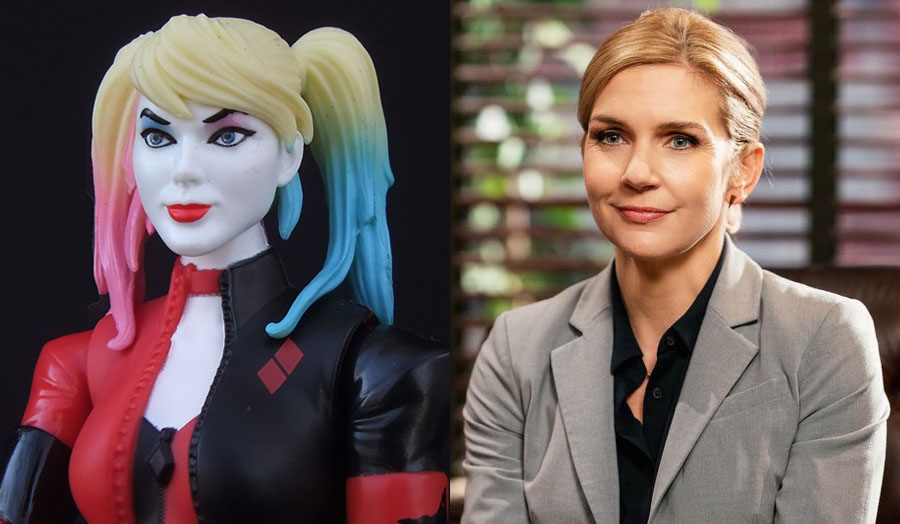 Her head sculpt offers a mature face that, although has the make-up application of Margot Robbie’s Harley (the actress who plays her in films), reminded me of Rhea Seehorn who plays Kim Wexler in the “Better Call Saul” television series.

The figure offers 11 points of articulation, but a major annoyance is the lack of any accessories, not even Harley’s trusty mallet used to pound opponents into submission or even a pistol.

I also do not recommend too much rough play as the joints tend to get loose after too much posing.

Read all about it: DC Comics offers the rebirth of the character in the trade paperbacks “Harley Quinn: Volume 1: Die Laughing” and “Volume 2: Joker Loves Harley” (each $16.99) that featured words by Mr. Palmiotti and Miss Connor during the 2016 story run.

Purists may want to also read her first legendary appearance with the Joker in comics back in The Batman Adventures’ one-shot “Mad Love” found in the trade paperback “Batman: Mad Love and Other Stories” ($13.99) written by her creators Paul Dini and Bruce Timm released back in 1994.

What’s it worth: Spin Master admirably picks up the license from Mattel to give 8-year-olds an affordable version of one of the Batman franchise’s most popular characters.

Even collectors will find plenty to like in the bold design. Considering the limited affordable choices for versions of this sized Harley (either Mattel’s recent original costume version for $12.99 or its “Suicide Squad” version for $29.99, both from 2016), I would expect older fans to close the purchase deal quickly.

A look at some other types of toys from Spin Master devoted to the Dark Knight’s universe. 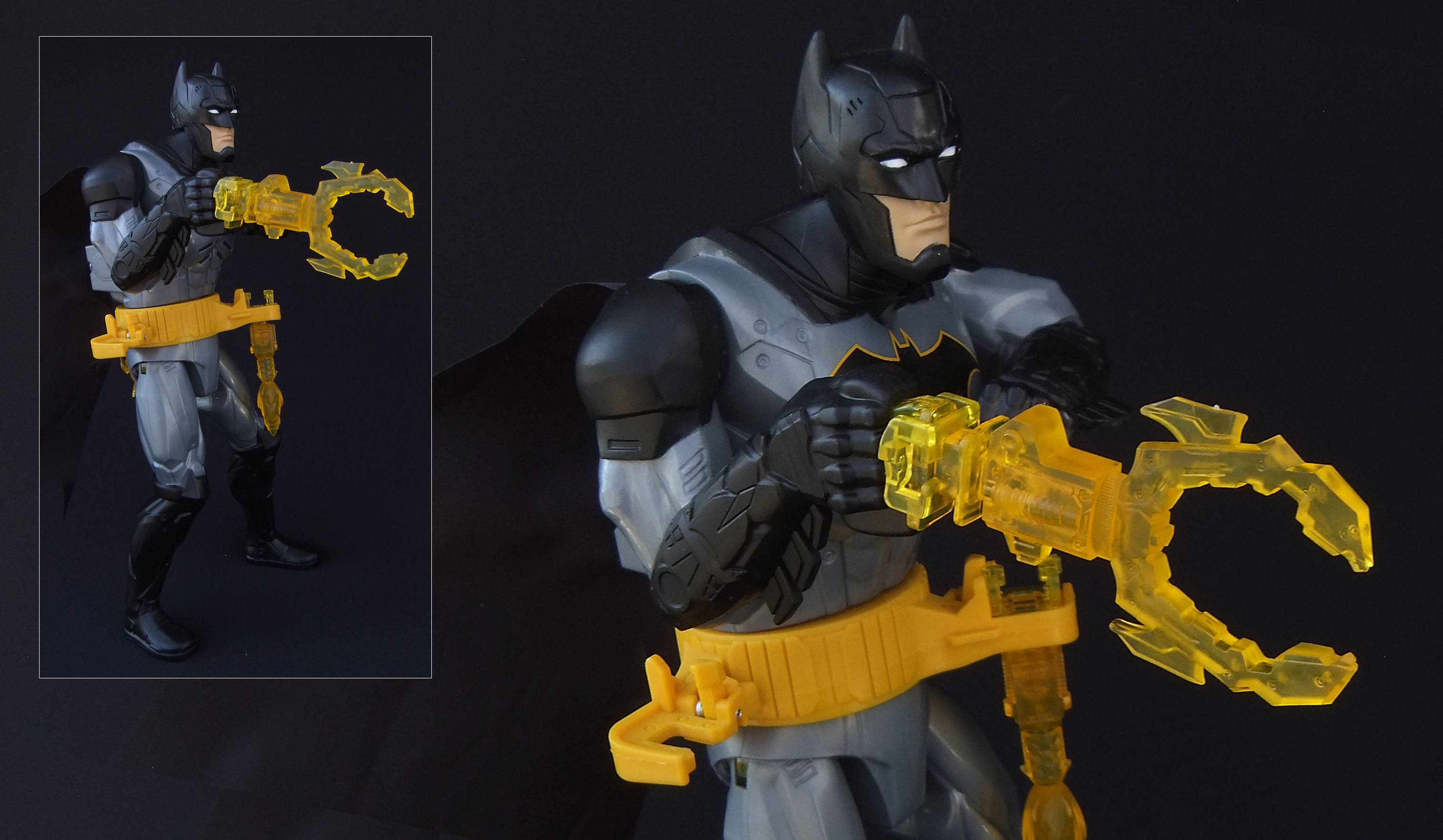 A rotating utility belt holds translucent yellow versions of the Bat Claw, Bat Torch and Bat Blaster while the figure’s right arm stands at the ready to grip one of the devices.

As an owner squeezes Batman’s legs together, the belt turns, the arm reaches down and grabs a device and aims it forward. Squeeze again and the arm puts the weapon back on the belt.

While the grabbing and pointing happens, the weapon briefly lights up, has an accompanying sound effect, and Batman offers one of 20 phrases such as “You can’t escape the Batman,” “You’re out of time villains,” “Beware evil,” and “The battle has just begun.”

Not only does the trick work 99 percent of the time, but the figure is one of the coolest effects-loaded toys so far this year. Bravo, Spin Master.

Transforming Batmobile (Ages 4 and older, $19.99) — The latest version of the Caped Crusader’s most trusted mode of transportation comes to playrooms via a 13-inch-long vehicle with a 2-in-1 transformation trick. 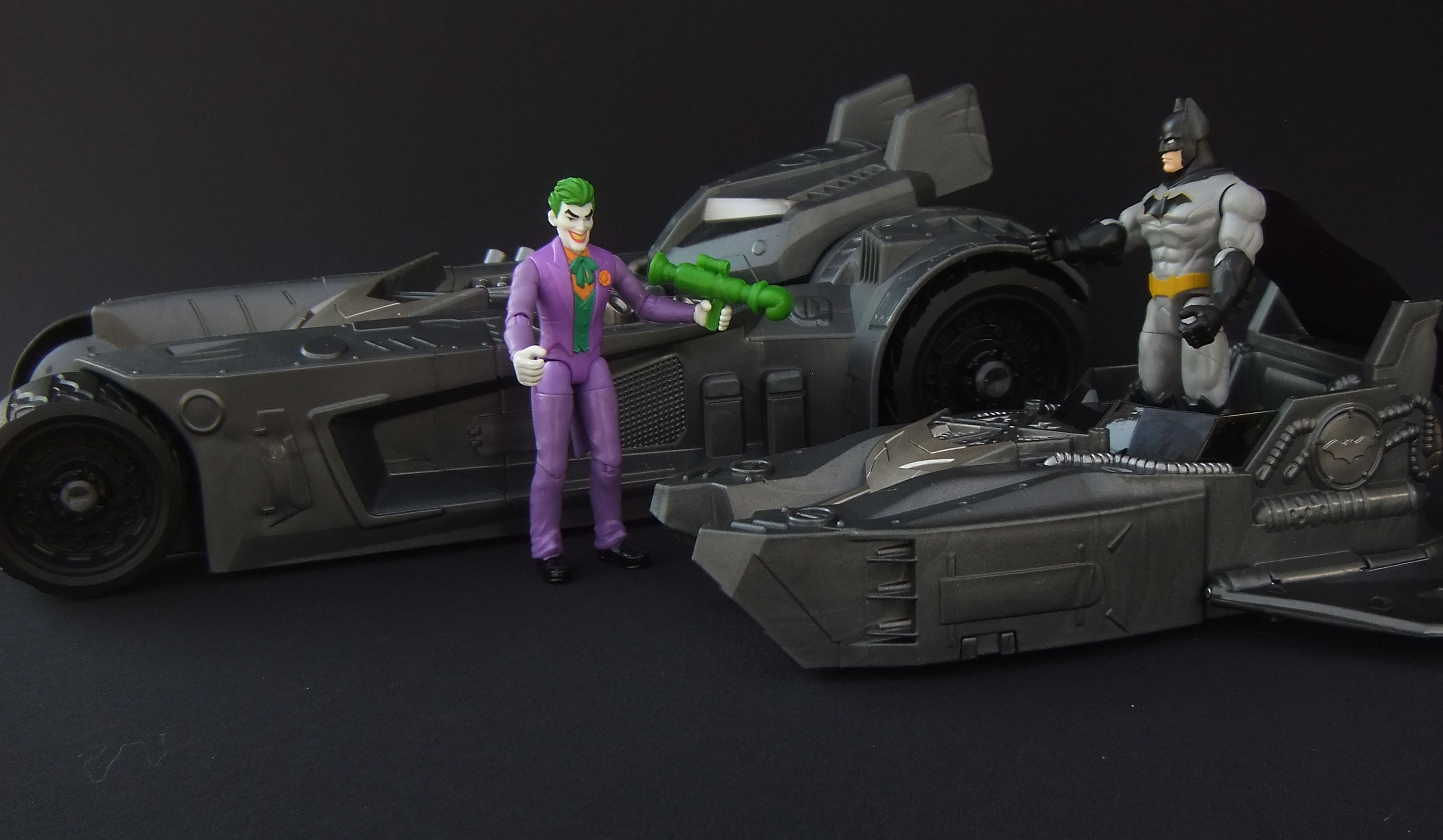 Features include rolling hard plastic wheels with half bat designs in the tire treads, a silvery Batman mask on front of the car (a bit like the 1989 Bob Kane version), a clear view of the engine and exhaust system, and a lift-up canopy exposing a pull-out secondary, 8-inch-long Batboat with a shared cockpit.

The boat has spring-loaded wings, turbine, tiny rolling wheels on its bottom, and fits one figure.

The vehicles are in perfect scale with Spin Master’s 4-inch-tall action figure collection ($7.99 each) that includes a “52 Rebirth” Batman with black rayon cape and a Joker dressed in a purple suit and green vest reminiscent of his Mego doll counterpart from the 1970s, but with scarier eyebrows.

The beauty of the new figure collection is not only getting a figure, but each package contains three mystery accessories housed in a reusable carboard vault.

For example, the Joker gets a green bazooka fist weapon, a pink wind-up teeth chatter bomb and a pair of rare grey armor gauntlets for Batman that attach to the wrists with grips.

The extra stuff can be used with other figure packs in various role-play scenarios suggested by a sheet in the package such as Carnival Chaos, Harbor Defender, Sky Detective or Arkham Asylum Escape.

The 4-inch figures each with 11 points of articulation and all the goodies practically scream role-play for youngsters.