PODCAST: History As It Happens Lincoln statues are coming down. Why?

Offsetting the misery of the U.S. government's spending disaster

Quiz: Guess the first name of these popular TV characters

The persistent myth is that government spending increases economic growth when, in fact, it slows growth beyond a certain point.

The myth is based on an old Keynesian theory argument that if there are unemployed people, the government can boost employment by giving people more money to spend, even though it increases the deficit.

This has some validity in the short run, provided, as Keynes argued, that the borrowed funds are paid back during the full employment phase of the business cycle. When Keynes wrote his theory (1936), government spending was only 20% of GDP (approximately half the current level), and tax rates were low.

TOP STORIES
Florida got it right, and the lockdown states got it wrong
Will the real president of the United States please stand up?
Trump blasts Biden over border crisis: 'Totally out of control' 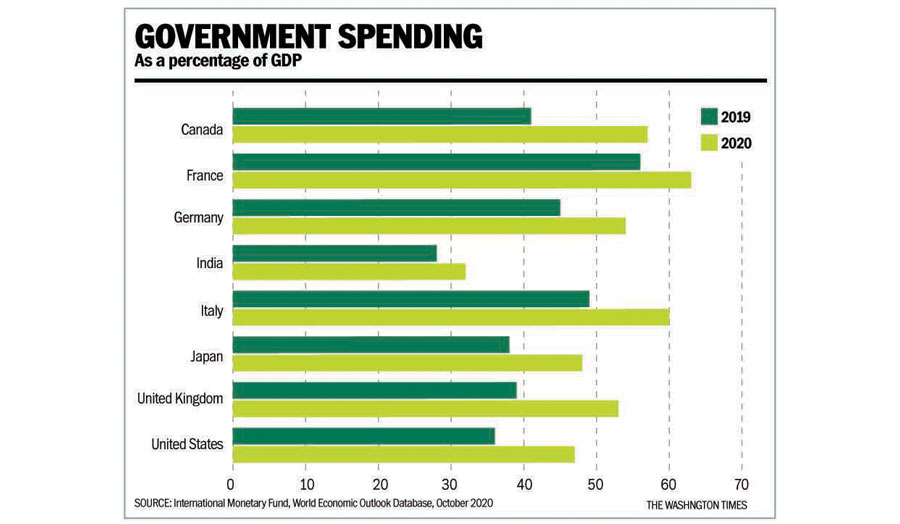 If a government builds a new dam, where the benefits from flood control, power generation and irrigation exceed the full cost of the dam, economic growth will benefit over the long run. But when government spending is used for transfer payments — taking money from the productively employed through taxation or borrowing and then giving it to people who are not working — economic growth will decline over time.

This occurs because increased taxation on the productive reduces their incentive for work, saving and investment. At the same time, those who receive the transfer payments are often required not to be engaged in productive activity in order to receive the benefits (such as unemployment insurance or certain forms of welfare) and thus lose some of their incentive to find work.

Writing in The Wall Street Journal this past Friday, former senior U.S. government economic officials John Taylor and John Cogan argued that President-elect Joe Biden’s proposed $2,000 checks will do nothing to stimulate the economy and will only add to the federal debt. They further stated: “Since the mid-1970s, one-time cash payments to individuals to stimulate economic growth have been tried on at least five separate occasions.” Presidents Ford, Carter, Bush and Obama tried the gambit — all with negligible results.

What is likely to happen is that people will be receiving the new round of “stimulus” checks at the same time the economy is reopening. (Our political geniuses have finally noticed that lockdowns serve little or no benefit while the costs to the economy, individual businesses and individuals have been in many cases catastrophic.) Businesses will start scrambling for workers and other things needed to reopen. The surge of money coupled with the government-induced shortages is likely to lead to higher rates of inflation. Once an inflation mindset settles in, it is difficult to reverse.

The proper thing for government to do would be to sharply reduce the level of spending to offset the spending surge. Unfortunately, this is unlikely because the political class believes the path to reelection is giving away other peoples’ money. You can hear the cries now: “We must meet the unmet needs of the schools, the homeless, the ill, the poor,” and, of course, the downtrodden opera companies.

Inflation will diminish the value of the government payments – both those that are needed and those grants, etc. to “political friends.” Interest rates will rise, causing deeply in-debt governments — states and cities, and entire countries — to default and/or radically cut back government services. The political class will never accept responsibility for their own mismanagement and will blame the pandemic and “greedy billionaires” who shortsightedly funded them.

The unholy alliance of mega-corporations, including big media and international organizations, and the political slime who feed off them will be unsustainable over the long run. The open question is: “When the meltdown arrives, will it be largely peaceful like the end of communism/socialism in Eastern Europe three decades ago or violent?”

Prudent people who are not part of the racket will find many ways of diversifying assets (by type and location) and income to protect themselves and their families. The good news is that even though the collapse will be global, it is also likely to be rolling — that is, not everyplace will be hit all at once, and some places are likely to escape altogether. Ironically, several of the countries that are in the best fiscal shape are those former communist countries whose debts “disappeared” in the great inflations with the collapse three decades ago.

Unsustainable government spending levels are manmade disasters, which self-correct by causing great misery or by wiser heads being responsible. Let’s hope for the latter.

Liberals only follow the science when it benefits them

Statehood for Puerto Rico versus the District of Columbia

The International Criminal Court must be defunded

China’s world domination still yet to be determined

Schools must leave no child behind

Affordable Care Act: The bad idea that will not die

What happened to America’s cultural boundaries?

Restricting COVID-19 vaccine based on race or ethnicity