Democrats’ time for magical energy thinking is over

Due the success of the Trump administration’s Operation Warp Speed in developing safe and effective coronavirus vaccines, America’s economy is starting to recover from one of the worst economic crises in our history.

Just as it was after the 2008 financial crisis, a key factor to this recovery is our energy sector. In recent years, innovative technologies have enabled our nation to become a global energy superpower. These advances gave us not only newfound energy freedom and leadership, but also new jobs and economic growth. One element to ensure the continuation of these new economic opportunities is carbon capture, utilization and storage (CCUS) technologies. CCUS holds the promise to not just produce clean and reliable energy but generate new economic opportunities for today and tomorrow.

CCUS systems are technologies used to capture carbon dioxide (CO2) from gases for later use or permanent storage. A simple, timeless example of carbon capture is a tree going through photosynthesis. There are numerous technologies that fall under this blanket definition, and they all result in lower emissions. This technology was first  developed in the 1920s and was adopted on a larger scale in the 1970s. It was discovered that CO2 could be used to increase the production of oil through a process called “enhanced oil recovery” (EOR).

This allows energy producers to extract previously inaccessible oil reserves at an affordable price while trapping the CO2 deep underground. This technique has improved enough that Occidental Petroleum recently transported an entire ship of “carbon-neutral crude” to India through the use of EOR and carbon offsets. If this practice becomes the norm, it will mean that American crude oil would be globally competitive in not just price, but environmental impact as well. In addition, CCUS technologies can be used to reduce the emissions from industrial practices, such as steel and concrete production. These developments could be a strategic game changer as both consumers and companies seek to reduce their carbon emissions.

While Congress is reviewing legislation to address climate and environmental concerns, history shows that burdensome regulatory structures and high taxes produce worse outcomes than relying on ingenuity and the free market. In 2009, then-Reps. Henry Waxman and Ed Markey argued that more regulation was essential to combatting climate change in their climate legislation: the “American Clean Energy and Security Act.”

Despite claims that this bill was necessary to reduce America’s emissions, reality shows that our nation’s emissions fell more quickly  without this legislation becoming law (figure 1). If this bill was enacted, it would have significantly hurt economic growth and killed America’s domestic energy sector, along with any chance of CCUS development.

Fortunately, Congress enacted prudent, light-touch policies that provide a path for CCUS to succeed. The Bipartisan Budget Act of 2018 created the 45Q tax credit to promote CCUS projects. This credit provides an incentive for carbon producers to capture and store their emissions underground instead of releasing them into the atmosphere. In December 2020, former President Trump signed the Energy Policy Act of 2020 into law. This law extended 45Q and provided a direct pay option for these investments. The best policy is to reward innovation instead of punishing energy and industrial sectors. New technologies will address consumer’s demands for affordable, reliable, and cleaner products and services. 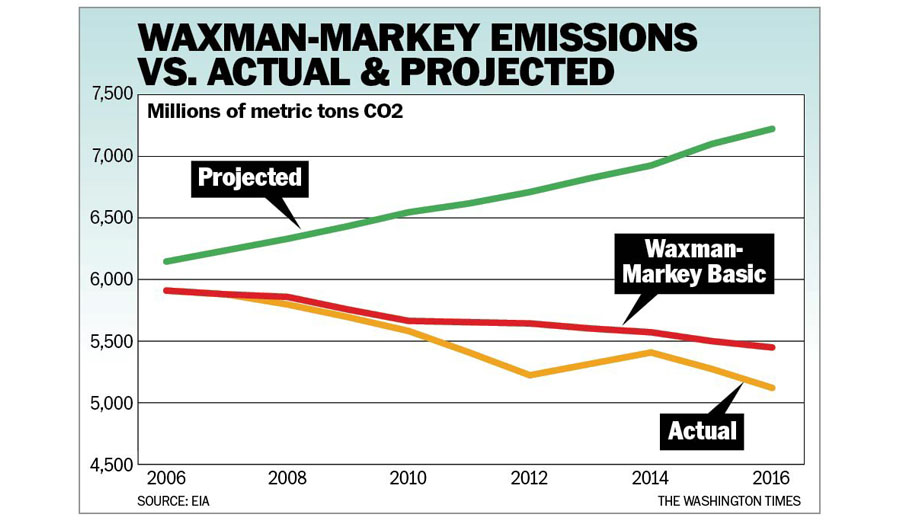 Even with its promise, the deployment of CCUS still faces headwinds. There is still limited infrastructure. In 2019, only 5,000 miles of CO2 pipeline were in operation in the United States. This is only 2% of the 225,000 miles of pipelines in the country. Another is the cost. A recent report by the International Energy Agency shows the capturing carbon can range between $15/ton of CO2 and $342/ton.

Nevertheless, as public and private investment continues to grow, it’s likely that infrastructure will rapidly expand, and costs will fall. In April, ExxonMobil announced its initial plans to develop a “carbon hub” in Houston, a $100 billion investment. This investment will likely create thousands of new jobs, increase the speed of CCUS deployment and reduce environmental impacts. These challenges are real, but not insurmountable.

Regardless of the claims of pundits and critics, traditional sources of energy and industrial methods are a critical component to our nation’s economy, security, and even our way of life. Even though more work is necessary, carbon capture can ensure continued American leadership in those industries and reduce our impact on the environment.

Democrats’ time for magical energy thinking is over

Biden admin. must do better protecting those left behind in Afghanistan

Why local school board elections are so important

Death awaits in Europe this winter