Need to get these up in a relatively short order since the NFL Week kicks off tonight with Indianapolis traveling to Jacksonville.

Giants are still the top team in the league, though there’s been a bit of shuffling with the Steelers, Panthers and Titans, who’ve lost two of their last four after the hot start.

If you’re looking for your Washington Redskins, they’re way down at 20. Remember when they were fourth? 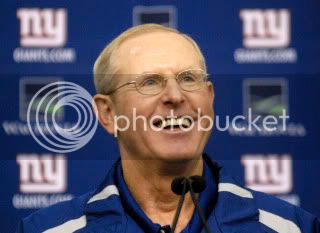 2. Steelers (3): It took an interception returned for a touchdown two weeks ago and a questionable last-second scoring catch last week, but Pittsburgh survived the New England-Dallas-Baltimore trifecta and can still gain homefield in the AFC playoffs by winning at Tennessee in the battle of the NFL‘s two stingiest defenses.

3. Panthers (4): Six days after running all over Tampa Bay‘s usually sterling defense, Carolina pounded Denver to set up the NFC battle for homefield advantage Sunday at Giants Stadium. The Panthers have won seven of eight, but have yet to produce an impressive performance on the road. If they win, they won’t have to worry about a repeat.

4. Titans (2): Tennessee’s formidable defense had no answer for Texans Pro Bowl receiver Andre Johnson in last week’s 13-12 loss which left the Titans 2-2 in their past four games and on the verge of losing the homefield advantage for the AFC playoffs. One mistake could decide what figures to be a titanic (pun intended) defensive struggle against Pittsburgh.

5. Ravens (5): If the referees hadn’t ruled that Pittsburgh’s Santonio Holmes was in the end zone with the ball in the final minute, Baltimore would be a near-certain playoff team. Now the Ravens have to beat the host Cowboys in the final game at Texas Stadium to stay in a sure wild card spot since New England, Miami and the Jets should all win on Sunday.

6. Cowboys (7): That was some hurting the Dallas pass rush laid on Eli Manning last Sunday night in what should’ve been the final game in Texas Stadium. Instead Dallas has to gear up again for Saturday’s visit by the formidable Ravens. The Cowboys need to win to keep pace in the NFC wild card race with Atlanta and Tampa Bay, both of whom play Sunday.

7. Colts (9): Pulling away from the lowly Lions late wasn’t memorable, but the Colts have still won seven straight and can sew up a seventh straight playoff berth by winning at reeling Jacksonville tonight. Indy will have three extra days to gear up for the finale against AFC South champion Tennessee and would like not to need to win that one to get in.

8. Falcons (8): A decade ago next month, Atlanta sealed its only Super Bowl trip by winning the NFC Championship Game at Minnesota. Sunday, the Falcons can sew up a playoff spot by combining a victory over the host Vikings — in a matchup of the top rushing offense and the No. 1 rush defense — with losses by Tampa Bay and either Dallas or Philadelphia.

9. Buccaneers (6): It’s good that Tampa Bay finished with struggling San Diego and awful Oakland because the Bucs’ run defense is suddenly leaking. The Bucs need to stay perfect at home to stay alive in the tight NFC playoff chase. Whether Jeff Garcia returns or Brian Griese fills in again at quarterback, he needs to go to red-hot wideout Antonio Bryant.

10. Eagles (11): The streaky Eagles are at it again. They followed losses in Weeks 3 & 4 with three victories and are now 3-0 since a near fatal 0-2-1 skid, clobbering Cleveland and Arizona and upsetting the Giants. Donovan McNabb responded to his brief benching with a vengeance, Brian Westbrook is healthy and the defense is the NFC’s best.

11. Vikings (15): Long ridiculed for being talented but soft, Minnesota has overcome injuries to Pro Bowl defensive linemen Jared Allen and Pat Williams and quarterback Gus Frerotte this month to win four in a row behind NFL rushing leader Adrian Peterson and move to the verge of its first division title since 2000.

12. Jets (12): Thanks to the sack/fumble/touchdown on the late play-action pass call by Bills coach Dick Jauron, New York lucked out and stayed tied for the AFC East lead with New England and Miami. The Jets shouldn’t need such good fortune again Sunday in Seattle, but they lost by 19 and 10 points in their previous West Coast trips this season.

13. Patriots (14): New England hasn’t lost four home games in a year since 2000. Arizona, 3-4 on the road and with the NFC West title cinched, doesn’t seem likely to put the Pats in that position except that they don’t match up well with the Cardinals’ high-flying passing attack. A victory keeps the Pats at least tied for the AFC East lead.

14. Dolphins (18): Miami had the ball for less than 22 minutes last week against San Francisco and didn’t score during the final 38:27, but the defense held the opposition without a touchdown for a third straight game. With Kansas City (26th in scoring) up next, the defense could make it four in a row and keep the Dolphins at least tied in the AFC East.

15. Cardinals (10): Arizona could use a victory at New England to re-establish some momentum for the playoffs. The Cards have lost three of four. Their last victory over a winning team was in Week 6. Arizona is 3-6 against teams outside of the awful NFC West and Sunday’s date in Foxborough is its last non-division game until postseason.

16. Bears (19): Chicago probably won’t make the playoffs, but Lovie Smith’s team hasn’t quit either, winning three of four heading into Sunday’s visit by the Packers, who walloped the Bears five weeks ago in Green Bay. Rookie running back Matt Forte has been a godsend, leading Chicago with 1,115 rushing yards, 58 catches and 11 touchdowns.

17. Texans (20): If not for consecutive nailbiting losses in Weeks 3 and 4, Houston would be very much in the playoff race after upsetting AFC-leading Tennessee by racking up 375 yards against the usually impregnable Titans defense. The Texans can make it five in a row Sunday at Oakland and then go gor their first winning season against Chicago in the finale.

18. Saints (13): The New Orleans to Chicago pipeline produced some of America’s greatest jazz music, but the Windy City has ended the Saints’ dreams three straight years: the NFC title game loss in 2006, the loss that sealed a losing season in 2007 and last Sunday’s loss that eliminated New Orleans from playoff contention. Detroit should be friendlier this week.

19. Broncos (17): Although no Bronco has run for even 350 yards in a season chock full of injuries to the backs, Denver can win the AFC West on Sunday by beating reeling Buffalo or with a loss by San Diego at Tampa Bay. A division title would be just the second for coach Mike Shanahan in the decade since Hall of Fame quarterback John Elway retired.

20. Redskins (16): Jim Zorn isn’t the worst coach in America. Far from it. But no team has fallen harder in the second half than Washington. What’s worrisome is that the Redskins played their best late in the year for predecessor Joe Gibbs and that it’s Zorn’s side of the ball, the offense, where Washington is really struggling.

21. Chargers (21): At 6-8, the 2007 AFC runnerups are still alive thanks to two touchdown passes by Philip Rivers in the final 73 seconds last Sunday at Kansas City and Denver’s loss at Carolina. It’s hard to see the underachieving Chargers being in the same position after visiting Tampa Bay this week while the Broncos host the bumbling Bills.

22. 49ers (22): Mike Singletary’s guys couldn’t complete the AFC East trifecta by following vistories over the Bills and Jets with another at Miami. Sunday’s foe, St. Louis is terrible, but the Niners have scored just 19 points combined in their past two road games. San Francisco won the previous matchup 35-16 at home in Week 9.

23. Jaguars (27): Did announcing that Gregg Williams was one-and-done as defensive boss inspire the Jags last week? That would be weird, but Jacksonville ended a 4-game slide by scoring two fourth quarter touchdowns to beat Green Bay. Upsetting Indianapolis tonight would avoid, at least for a week, the Jags’ first double-digit loss season since 2003.

24. Packers (23): Green Bay was very much in the NFC race a month ago after crushing Chicago to improve to 5-5. But last Sunday’s loss to Jacksonville was the Pack’s fourth straight (and third in a row by fewer than five points) and ensured just their second losing season in 17 years. And the Packers know the host Bears will be out for revenge Sunday.

25. Seahawks (26): It doesn’t mean much in the scheme of a top coach’s 17-year career, but Seattle’s rally last week at St. Louis ensured that Mike Holmgren will depart with at least a .500 record in the division in his ugly final season in command of the Seahawks. Beating the Jets on Sunday will ensure that Holmgren will avoid his first last-place finish.

26. Bengals (30): Who was that team that jumped on top of the Redskins 17-0 after less than 19 minutes last Sunday and then put together a time-consuming drive for the field goal that clinched the upset in the fourth quarter? It wasn’t the same bunch that had been crushed by a combined 71-6 the previous two games. Which team shows up Sunday in Cleveland?

27. Chiefs (28): Three of Kansas City’s final four AFC West games during the long reign of departing general manager Carl Peterson were losses, two by a point. A constant contender under Peterson, the Chiefs are 6-24 the past two seasons and in need of a serious overhaul. A loss to Miami on Sunday would give Kansas City the worst record in franchise history.

28. Bills (25): As if Buffalo needed further humiliation after plunging from 4-0 to 6-7, the Bills fumbled away the ball and the game to the Jets last Sunday to clinch the AFC East cellar and a 10th straight season out of the playoffs. Coach Dick Jauron’s seat is the only thing hot in Buffalo as the Bills play the string against the Broncos and Patriots.

29. Browns (24): After an opening loss to Dallas, Cleveland stunned the Giants and pushed the Redskins to the limit but didn’t put up much of a fight at Philadelphia in its final game with an NFC East foe. Sunday, the Browns can assuage a little of their disappointment of this depressing season by sweeping the Bengals and clinching third in the AFC North.

30. Raiders (29): After six horrible seasons, one would think Oakland had no negative left unaccomplished. Wrong. The Raiders allowed 35 first-half points last Sunday, the most since they were an AFL weakling in the early 1960s. And now Oakland, which has lost at least 11 games each year since 2002, visits red-hot Houston.

31. Rams (31): How do you extend your losing streak to eight against a visitor minus its quarterback and Pro Bowl left tackle? You blow a 10-point halftime lead by managing just a 48-yard field goal in the second half. Whoever replaces Jim Haslett come January will be St. Louis’ fifth coach in five years and will inherit the worst Rams team in 47 years.

Should Trump pardon protesters arrested at the U.S. Capitol?

David Elfin has been following Washington-area sports teams since the late 1960s. David began his journalism career at Bethesda-Chevy Chase High School, the University of Pennsylvania (B.A., history) and Syracuse University (M.S., telecommunications). He wrote for the Bulletin (Philadelphia), the Post-Standard (Syracuse) and The Washington Post before coming to The Washington Times in 1986. He has covered colleges, the Orioles ...

Census numbers won't be released before change in power

Did Trump commit a crime by exhorting the crowds on Jan. 6?