LISTEN: Breaking the cycle of hate The Rebellion Podcast with Everett Piper

The Unregulated Podcast: Numbers Mike McKenna and Tom Pyle on the Biden admin’s descent into madness

RNC's Steele flashback: If you don't want me in the job, fire me

(All emphasis is mine)

The chorus of GOP and conservative leaders is growing louder for Republican National Committee Chairman Michael Steele to step down from his position. This follows Mr. Steele’s remarks regarding America’s involvement in Afghanistan at a Republican fundraiser in Connecticut last Friday, saying it “was a war of Obama’s choosing,” that America had not “actively prosecuted or wanted to engage in.”

Conservative commentators from The Weekly Standard’s Bill Kristol to Liz Cheney called for Mr. Steele’s resignation. The Sunday news shows highlighted Republican senators looking to not only distance themselves from Mr. Steele but also hint at whether or not the RNC Chairman is only serving as a distraction before the November mid-term elections.

“I think that Mr. Steele is going to have to assess as to whether he can still lead the Republican Party as chairman of the Republican National Committee,” said Senator John McCain, Arizona Republican, to ABC News’ Jake Tapper on Sunday

This is not the first time Chairman Steele has found himself in hot water with Republicans and conservatives since his election as chairman. The calls for Mr. Steele’s resignation appears to be more of a build up of Republican frustration with Steele. This is not just about one remark about Afghanistan but more about a pattern of behavior coming from the Chairman.

In April of last year, he referred to conservative talk radio star Rush Limbaugh in the following way:

A storm of criticism has swirled around Mr. Steele over his missteps, retractions, and profiting from speeches and his new book, “Right Now: A 12-Step Program for Defeating the Obama Agenda.” Three of his predecessors have publicly castigated his actions. His critics say the controversy is distracting voter attention from the Democrats’ problems 10 months before midterm elections. 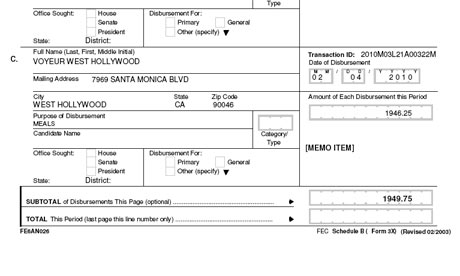 The most salacious of controversies Chairman Steele was dragged into happened when the Daily Caller reported on an RNC FEC filing in March showing Mr. Steele’s pricey travel budget. A West Hollywood topless dancer club was also included in the filing. It should be noted, according to the RNC, the West Hollywood club was “a reimbursement made to a non-committee staffer,” and the RNC made it clear that Mr. Steele was not at the club:

Once on the ground, FEC filings suggest, Steele travels in style. A February RNC trip to California, for example, included a $9,099 stop at the Beverly Hills Hotel, $6,596 dropped at the nearby Four Seasons, and $1,620.71 spent [update: the amount is actually $1,946.25] at Voyeur West Hollywood, a bondage-themed nightclub featuring topless women dancers imitating lesbian sex.

In January, he lashed out at Republicans critical of his work as RNC Chairman telling ABC News Radio:

“I tell them to get a life. That’s old Washington, that’s old ways, and I don’t represent that, and that kills them.

There’s some within the party who are still mad that I’m chairman. There’s some outside party who are so trapped in Washington, they couldn’t see beyond their nose. They have no idea of what’s going on in America. They no idea how the political ground has moved beneath their feet.

They’re stuck in a time that doesn’t exist anymore. So here comes a 6 foot 4 bald guy who is talking about hip-hop Republicans, who is doing shows like D.L. Hughley in off-beat environments where Republicans never go—having conversations in town hall forums at Howard University and in Harlem, engaging with Republicans whether they’re Log Cabin Republicans, God forbid moderate Republicans, talking about how we need them to be part of our expansion in our growth, and they hate it, and its sad, and it why we lost in the past.

I’m telling them and I’m looking them in the eye and say I’ve had enough of it. If you don’t want me in the job, fire me. But until then, shut up. Get with the program or get out of the way, because America wants something different.”

Since Mr. Steele made these comments in January, no one has shut-up or gotten out of Mr. Steele’s way, but if he pushes hard enough, he just might get option three.

The NFL is back on top of the ratings, dominating with 48 of the top 50 most watched telecasts. How much football are you watching this season?

Olympic athletes urged by activists not to criticize China

EDITORIAL: High noon in the Virginia

The curse of inflation