UPDATE:The image below is what Congresswoman Pelosi was referring to which was “taken at a protest last week outside the Fort Collins office of Rep. Betsy Markey (D-Colo.),” according to a Huffington Post reader. The Speaker’s office also referred to a story written at rawstory.com:

“While it’s possible the top House Democrat might have been misinformed (due to non-specific media reports) about a swastika, the following sign written with Nazi lettering, spotted at a Congressman Lloyd Doggett event, has been widely reported on liberal blogs and in the mainstream media.”

“In addition, at another town hall held in Worcester, Massachusetts, Democratic Congressman Jim McGovern, the Telegram reports, ‘was likened by an attendee to Josef Mengele, the Nazi officer who performed experiments on concentration camp survivors.’”

It is interesting to see Ms. Pelosi’s  outrage over these types of images considering swastikas were flying around her own district this past January during the “Gaza War Protest and Anti-Israel Rally” in San Francisco.  Here are some of the images:

Israeli flag with a Swastika in San Francisco protest

Swastika in an Israeli flag on San Francisco Street protest.

Furthermore,  President Bush was compared to Hitler in  Nancy Pelosi’s San Francisco district, as seen by the image below. However, when Mr. Obama is compared to similar imagery, Ms. Pelosi becomes offended all of a sudden?  How about cleaning up your own backyard first, Madam Speaker? 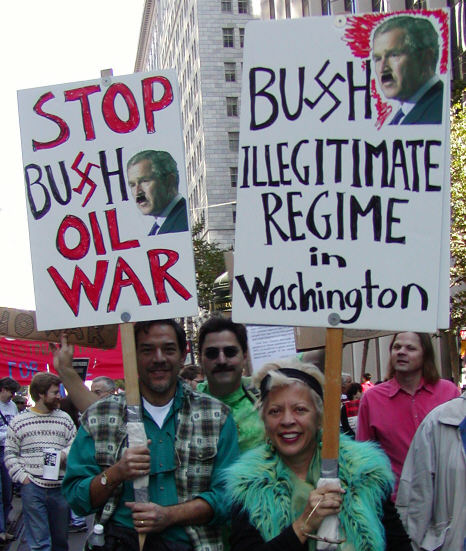 Yesterday, Rep. Nancy Pelosi (D-Calif.)  made an accusation that town hall protesters are bringing swastikas to the political forums.  However, the Speaker of the House did not give any evidence that town hall attendees are indeed doing this.

A Daily Kos Thread that  was started on Monday, August 3rd. Here are two interesting comments from that thread (h/t P.J. Gladnick):

Most Americans don’t necessarily want to ally themselves with crazy people screaming and chasing down representatives of Congress. There’s already reports that some people in the crowds are wearing things like Nazi swastikas. If Obama and the Democrats are able to portray these people as their opponents, it may end up hurting the Republicans by association.

Some kid (a teenager) showed up with a swastika at the healthcare reform rally in Austin 2 weeks ago. A former Obama staffer who’s Jewish gave him a good talking-to about why it’s offensive that left the kid in tears. Shame on the so-called adults on that side that let him think it was a good idea to display it. (Then again, these are people whose idea of a protest sign is “My tonsils, my choice” - an actual sign.)

Wiz Bang’s Kevin Aylward did some investigative work on Ms. Pelosi’s Swastika at Townhall’s claim and concluded that her accusation is a crock.  Here is some of Mr. Aylward’s work:

Think Progress - 1 result dated back to 2008, unrelated. Verdict: No corroboration

Google Blog Search - None related, one post calling B.S., and there was this from a recent Austin, Minnesota immigration reform debate, where an actual member of the Socialist Party is said to have worn a t-shirt with a swastika. Verdict: No corroboration

But finally, the comment sewer at Daily Kos did reap a reward…

Daily Kos Comment Search - Mostly non-related, but there is one comment which appears to be the source of Pelosi’s contention. Here we find the one and only reference to someone (a kid) supposedly wearing a swastika to an event in Austin two weeks ago.Verdict: Possible source

With that to go on I found this report about the Austin event. No mention of swastikas in the report, but there was one comment mentioning a sign with swastikas. Verdict: Another possible source

Did Ms. Pelosi base her accusations solely on left-wing blogosphere speculation?  If so, defaming Americans who want answers from their representatives as swastika toting angry mobs is a vile act, and the Speaker of the House should know better.

Should the FBI reveal what they know about Hunter Biden's laptop?

Kerry Picket, a former Opinion Blogger/Editor of The Watercooler, was associate producer for the Media Research Center, a content producer for Robin Quivers of “The Howard Stern Show” on Sirius satellite radio and a production assistant and copy writer at MTV.

Eric Holcomb, GOP governor, would consider another stay-at-home order 'if the numbers dictate it'

Rush Limbaugh gives cancer update: 'Days where I do not think I'm under a death sentence are over'

Inside the Beltway: New York Times cites 'the power of conservative talk radio'

Christmas with the Joe Biden cranks

Which candidate do the Chinese and Russians want to win the U.S. presidential election?

Stick with stocks through the contested election