It looks like Marvel Comics’ Captain America is throwing his mighty shield at the Tea Party Movement. Warner Todd Huston wrote on his Publius forum blog that the super-powered soldier who fought the Nazis in WWII observes with disdain Americans who are seemingly compared to Tea Party Movement protesters of today:

In issue number 602 of Captain America, a new story line has begun called “Two Americas.” In it the current Captain (there have been a few of them, apparently) is on the trail of a faux Captain America that is mentally deranged and getting chummy with some white supremacist, anti-government, survivalists types going by the name of “the Watchdogs.” While investigating this subversive group, Captain America and his partner The Falcon — a black super hero — have decided to try and infiltrate the secretive organization.

In preparation for the infiltration, Marvel Comics depicts the two super heroes out of costume and observing from a rooftop a street filled with what can only be described as a Tea Party protest. The scene shows crowds of people in city streets carrying signs that say, “stop the socialists,” “tea bag libs before they tea bag you,” and “no to new taxes.” Naturally, the people in these crowds are depicted as being filled with nothing but white folks. 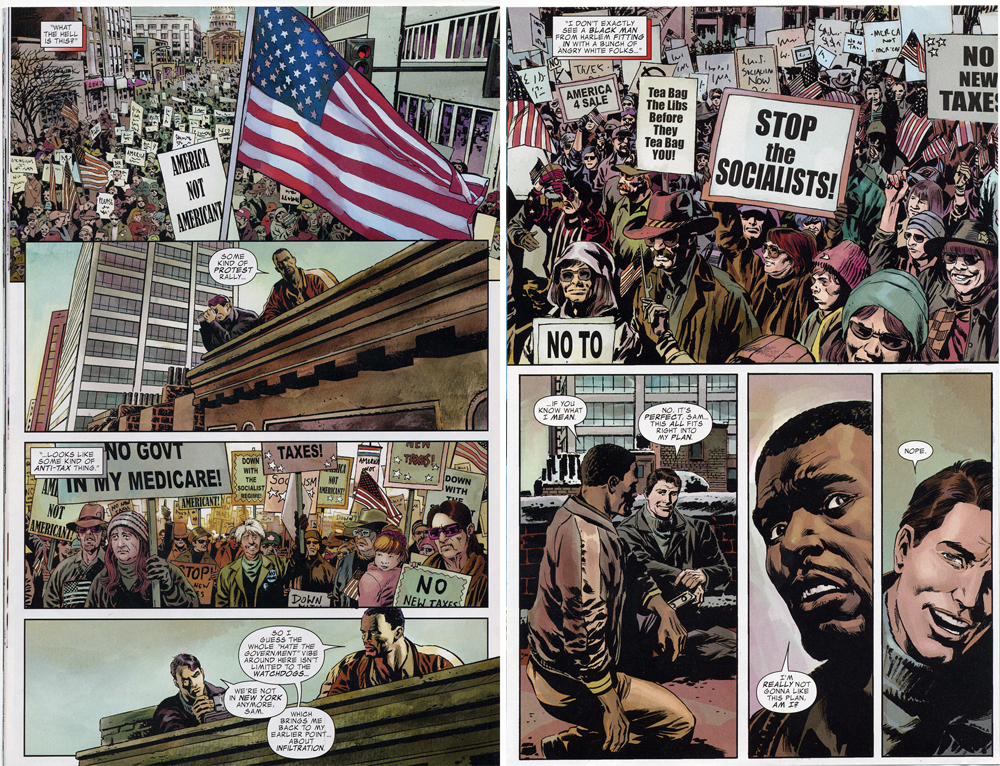 Marvel Comics has responded to the controversy that has reached not just the conservative blogosphere but the comic book message boards as well. On the Cup O’ Joe column at Comic Book Resources, Marvel Comics Editor-in-Chief Joe Quesada defends the Captain America story line in issue number 602, but he apologizes for a panel in the comic book that seems to identify the Tea Party movement with the fictional group portrayed in the comic. (btw, for Marvel fans, there are spoilers in here):

Joe Quesada: Hold on. Before digging into this, you’re starting from a false premise. There was zero discussion to include a group that looked like a Tea Party demonstration. Ed [Brubaker] simply wrote in an anti-tax protest into his story to show one of the moods that currently exists in America. There was no thought that it represented a particular group.

And yes, what Ed said is absolutely true, he does shy away from labeling things and did exactly that in this instance. In Ed’s story, there was no connection to the Tea Party movement, that’s a screw up that happened after the fact and exactly what some people are getting upset about.

Joe Quesada: There is one legit criticism in there, and a lot of not so valid stuff, but let’s dive into this. By the way, for those that haven’t read “Captain America” #602, here’s your spoiler warning: read no further lest you want to know what’s going on.

In the story, our new Captain America – who is Steve Rogers’ old sidekick Bucky Barnes – and Sam Wilson the Falcon – another ex-sidekick of Steve Rogers – are in search of an armored super-militia group called the Watchdogs who attacked a sheriff and his squad and have set up roots in the hills outside of Boise, Idaho where they are building a weapon and planning an act of terrorism against the people in that town. Keep in mind that the Watchdogs have been villains in the Marvel Universe since 1987. Bucky and Sam hatch a plan to infiltrate this group and defeat it from within so they travel to Idaho. The idea behind this was to expose them both – in particular Sam (who has been portrayed most often as a leftist leaning character) – to other parts of America. While in Idaho in search of the Watchdogs, they come upon an anti-tax, anti-big government rally, which is something that Sam, in particular, hasn’t been personally exposed to, and it hits him the wrong way. Here, at this moment in the story, Sam is the fish out of water. This, however, is where Mr. Houston misreads what’s happening in the story. He assumes that the people protesting in the streets are the Watchdogs, when in fact they are not, so this is an element that is taken out of context. These protestors as written by Ed are no different than protesting crowds he wrote into issues of “Cap” last year. Only those protestors were angry about oil prices skyrocketing and the housing market problems. So in short, the Watchdogs, and the protestors aren’t connected, they just happen to be in the same story.

Where Mr. Houston is correct is in our accidently identifying in one of the held up signs, the group as being a part of the Tea Party instead of a generic protest group. That’s something that we need to apologize for and own up to, because it’s just one of those stupid mistakes that happened through a series of stupid incidents.

According to to Mr. Quesada, the book was ready to go to printer, but the panel in question had a group of protesters handling signs with no words on them, so the editor asked the letterer to “fudge in” some quick believable slogans at the last minute. The letterer referred to this sign  as a sample to work from. Marvel has said newer editions of the comic book will not include the controversial art work. Unfortunately, the reach of the Tea Party smear job from broadcast media affected a story line at Marvel Comics, regardless of error. While, comic book companies want to give fantasy characters a sense of current day realism, wading into areas of politics is guaranteed kryptonite for at least half of their readership.